What’s the paper about?
Where do the stars come from? I guess most people ask this question at some point in their lives and it is no surprise that a lot of research is going on in that field. Other astrobites already discussed some basics and concepts of star formation. Among others a process called magnetic braking, which plays a crucial role in transferring angular momentum during the collapse phase of the prestellar core. However, there are two main caveats. First, interstellar magnetic fields can only be observed indirectly, which makes it difficult to estimate their strength precisely. Second, simulations are idealized and often neglect mechanisms, which can reduce the strength of the magnetic fields. That’s exactly, where this work comes into play. The authors investigate if and how the magnetic field strength reduces, or as physicists say, dissipates during the initial collapsing phase.

A brief overview of the underlying model 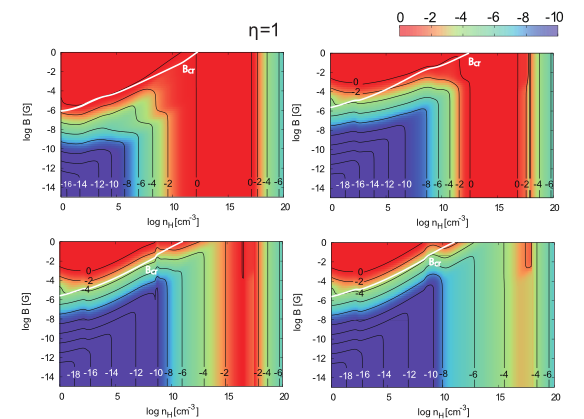 Fig. 1: Illustration of regimes of magnetic dissipation for an ionization rate such as present in the Milky Way. The color scheme reflects the logarithm of the ratio of drift velocity to free-fall velocity of the gas. The four panels from left to right and up top to bottom mark different metallicities of Z/Zsun=1 (panel 1), Z/Zsun=10-3 (panel 2), Z/Zsun=10-6 (panel 3) and Z/Zsun=0 (panel 4). Above the white line ambipolar diffusion dominates over Ohmic dissipation.

Particularly, the authors investigate how the magnetic field strength evolves in a so called one-zone model of spherical core collapse. Expressed in every-day language, this means that for each parameter one average value is assumed for the pre-stellar core, which is modeled by a sphere. After the sphere starts to collapse the parameters at the center evolve and the authors study the parameters’ change. The authors are mainly interested in the dependence of the dissipation on the amount of elements different than hydrogen and helium in the environment (astronomers call this relative abundance ‘metallicity’). The metallicities vary from 0 to solar strength. Moreover, the authors study the collapse for environments of different ionization rates. The ionization rates indicate how likely atoms and molecules become electrically charged. Remember that this is important because magnetic fields are induced by moving electrical charges. The authors assume four different rates corresponding to four different regimes in the universe (primordial pristine environment, first galaxies, Milky Way and distant starburst galaxies). While the primordial pristine environment is basically non-ionized and first galaxies only have 1% of the ionization rate of the Milky Way, distant starburst galaxies are supposed to be ionized ten times stronger than our galaxy.

The other often considered process is the transfer from magnetic (or electric energy) into heat called Ohmic dissipation. Indeed, the authors claim that this is the main reason to reduce the magnetic field strength in prestellar cores. Figure 1 illustrates the ratio of the drift velocity of the magnetic field lines to the gas velocity for four different metallicities and the ionization rate of our Galaxy (η=1). In the case of a faster drift than gas velocity the magnetic field dissipates. The white line marks the boundary between the two dissipation mechanisms. Ambipolar diffusion dominates above the line and Ohmic dissipation below. As you can see in the four panels of Fig. 1, there is a range colored in red for densities high enough to collapse between nH=1012 and 1017 cm-3 for solar like metallicities. Note that the range becomes narrower for decreasing metallicities because the charge carriers are available for less metallicity and the gas becomes more resistive. Similarly, assuming a constant metallicity, the magnetic field dissipates for a wider range of density in the case of lower ionization rates. 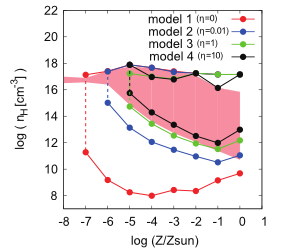 Fig. 2: Density relation with respect to metallicity for four different ionization levels. Upper and lower points of the same color mark the range, where Ohmic dissipation applies. The shaded region illustrates the range, where protostellar outflows and jets are expected to be launched. As you can see, the launching region is independent of the ionization rate.

Relevance for the formation and properties of the First Core

So far so good, but what does that mean for star formation? Figure 2 illustrates the correlation of density and metallicity for different ionization levels (different colors). The upper and lower points mark the boundaries of the density range where Ohmic dissipation is active. The shaded region illustrates the density range in which protostellar outflows or jets may occur during the phase of the first hydrostatic core. Let’s look how stars like the Sun could have formed. The shaded region extends to densities lower than the lower bound of the dissipation range (green dots). Hence, the first core already forms and evolves at densities lower than required for dissipation. That means, at the time when the first core forms the magnetic field strength is not reduced. During the collapse the strong magnetic field lines can twist strongly. Subsequently, the twist induces protostellar outflows and jets before Ohmic dissipation had a chance to suppress the launch.

What is most important about the paper? The authors study the evolution and possible dissipation of the magnetic field during pre-stellar collapse for different conditions of the environment. Considering conditions of our galaxy, Ohmic dissipation is expected to occur during gravitational collapse. Does that mean simulations neglecting the dissipation effects are useless? Fortunately not, because at metallicities similar to the one present in the Sun, the first core already forms before dissipation sets in and launching of outflows and jets is still possible. That means that magnetic effects are actually expected to influence the collapsing phase. With respect to the angular momentum problem, it means: magnetic braking can contribute significantly during the initial phase of star formation even when considering magnetic dissipation.