Paper Title: Before the first supernova: combined effects of HII regions and winds on molecular clouds

Big stars are bullies. When one dies, it does so spectacularly, exploding in a supernova with energy output equal to that of the Sun over its entire lifetime. However, a massive star’s mischief starts much sooner. As it is born, it can steal gas from its neighbors. During its life, its strong radiation and winds plow through the neighborhood, wreaking havoc and disrupting the births of other stars. Is this feedback enough to explain why we see such a small fraction of the gas in stellar nurseries ending up in stars? New analysis using simulations investigates the details. 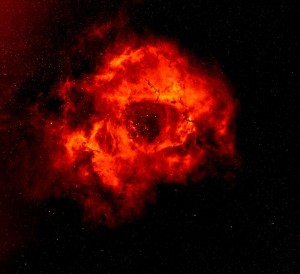 Figure 1: The Rosette Nebula, an H II region in which massive stars have ionized the surrounding gas from which they formed. Image credit: Wikipedia

All stars are known to form in dense cocoons of cold, mostly molecular gas called Giant Molecular Clouds (GMCs). Here, “dense” is a relative term — while they are much denser than the average interstellar medium in galaxies, these clouds are still more rarefied than even the strongest vacuum we can create in laboratories on Earth. Under the action of gravity, extra-dense regions within GMCs contract, eventually forming stars as gas reaches local densities high enough to fuse hydrogen. But most of the gas actually doesn’t end up in stars: over the lifetime of a GMC, only 5-10% of its total mass turns into stars. The rest ends up being cycled back into the galaxy’s gas reservoir as the GMC dissipates over time. Why is star formation so inefficient? It may be due to stellar “feedback”, which is defined as any process in which energy or momentum is transferred from a star to its environment. In observations of regions where massive stars have formed (called H II regions), we can see that the gas has indeed been disrupted by the stars’ harsh ionizing radiation fields and strong winds (Figure 1). However, observations only provide a snapshot of one moment in a process that takes many millions of years. Simulations can be extremely helpful in connecting the dots and investigating cloud evolution in as close to “lab conditions” as we can get in astronomy.

Dale et al. ran Smoothed Particle Hydrodynamics (SPH) simulations of molecular clouds with the goal of testing the effects of winds and radiation from massive stars on their environments. They generated several runs with different initial conditions, varying the initial cloud mass, size, and whether or not the cloud was “bound” (whether it would eventually collapse or disperse if left alone). For each run they start with a cloud of centrally condensed, turbulent gas (the approximate initial conditions of a GMC) and then essentially “press play”, allowing the simulation to evolve under the included physics. When gas becomes locally dense enough, stars are “formed” there, and these stars then can radiate and expel material (“winds”) that affect their surroundings. The authors then compared the results of simulations in which winds and radiation were active to those in which there was no feedback.

The visual results are fairly drastic, as shown in Figure 2. The cloud remains relatively intact when feedback is not included. However when winds and radiation from massive stars are added, the gas is largely cleared out from the central region of the cloud. The final appearance of the cloud is highly asymmetric, with oblong cavities buttressing patchy filaments of gas. This is quite similar to observed H II regions such as the one shown in Figure 1, which is a sign that the simulations are modeling feedback processes that are actually happening in reality. Interestingly, radiation seems to play a more important role than winds in this process (upper right vs. lower left panel). 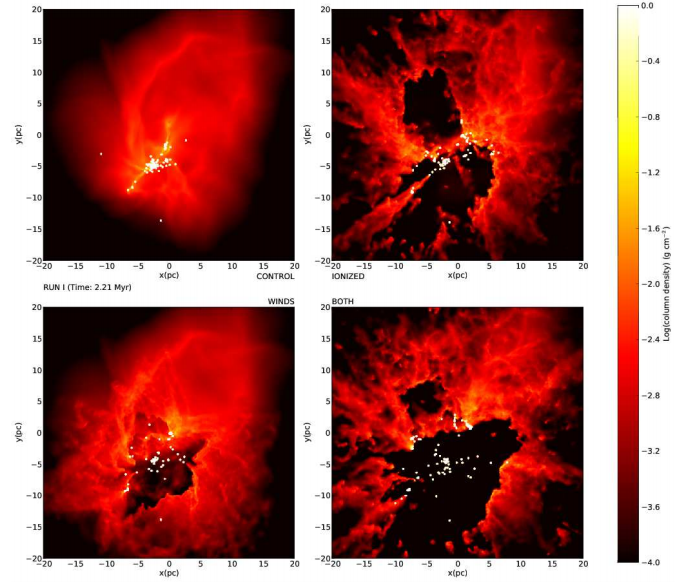 Figure 2: Final cold gas density in simulated star-forming clouds with various feedback effects. Upper left: no feedback; upper right: radiation only; lower left: winds only; lower right: both winds and radiation. White dots indicate the positions of massive stars or star clusters that have formed, which are the sources of the ionizing radiation and winds. Radiation seems to have a larger impact than winds on the cloud, and the final structure is quite asymmetric. Figure 8 from Dale et al.

The authors find that the disruption of the cloud’s gas by radiation and winds does seem to slow down the star formation process, but not drastically so. Part of the reason the disruption is not as effective as it could be is the cloud’s irregular geometry. In certain areas of the cloud, the emitted photons can escape instead of ionizing the gas, reducing the effects of feedback. The star formation efficiency — the fraction of gas that ends up in stars — is measured to be 10-20% in the simulations, a factor of about three higher than efficiencies estimated from observations.

What’s missing? There are other known sources of feedback in real clouds that aren’t modeled here. Outflows from low-mass stars, which are individually less energetic but much more numerous, can in aggregate inject significant energy and momentum into a cloud. Magnetic fields, which are observed to be present, provide resistive force against gravity, further suppressing star formation. Supernovae from previous generations of stars also can disrupt clouds. Perhaps including all these effects simultaneously could account for the low observed star formation efficiency. Such an effort would be quite computationally challenging, however, as it would add many additional calculations to each time step of the simulation. Nevertheless the study discussed here demonstrates the clear importance of modeling the effects of radiation — and to a lesser extent, winds — from massive stars on their natal clouds, and represents a concrete step along the way to a more complete understanding of how stars — including our Sun — came to be.