Paper I: The Chemical Evolution Carousel of Spiral Galaxies: Azimuthal Variations of Oxygen Abundance in NGC 1365

To astronomers, the world is composed of hydrogen, helium, and… other stuff. And because astronomers are The Worst At Naming Things™, we call all the other stuff “metals.”

So the abundance of metals in the interstellar medium of a galaxy (the gas-phase metallicity) can be used to study how that galaxy evolved over time!

We actually know a lot about the overall gas-phase metallicities of galaxies. For instance, we know that more massive galaxies tend to be more metal-rich. This is probably because they have an easier time holding on to their metals (compared to low-mass dwarf galaxies, whose masses are so low that their metals are often expelled by strong winds produced by stars and supernovae). Furthermore, we know that galaxies have (on average) moved from lower to higher metallicities over time. This makes sense, since generations of stars keep adding metals to the gas in a galaxy over time.

More recently, we’ve been able to measure how metallicities change within galaxies. We know that most galaxies are more metal-rich near their centers and more metal-poor near their outskirts. This might reflect the fact that galaxy formation tends to start from the inside and move outwards, so that there’s more time for metals to build up in galaxy centers. 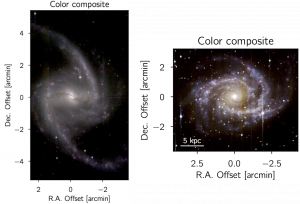 Heavy in your (spiral) arms

In today’s papers, I-Ting Ho and collaborators  try to figure out if there are patterns in gas-phase metallicities that are related to the spiral patterns of a galaxy’s disk.

To do this, they measure metallicities in the face-on disks of NGC 1365 and NGC 2997. They did this with hundreds of optical spectra from the TYPHOON program, using the 2.5-meter du Pont telescope at Las Campanas Observatory. It took a really long time—around 40 to 50 hours for each galaxy—but the authors ended up with extremely high-resolution spectral maps of each galaxy.

How are metallicities measured from these spectra? In today’s papers, Ho et al. use a code to fit multiple spectral lines to a grid of models with different metallicities and other parameters. (This Astrobite has a good overview of other ways to derive gas-phase metallicities, if you’re interested. For the purposes of today’s papers, the exact calibration doesn’t actually matter too much as long as we’re consistent, because we only care about comparing results within the same galaxy.)

This leads to beautifully resolved metallicity maps of regions in the galaxies (Figure 2)! These maps show that the most obvious pattern is a radial gradient: metallicities are higher near the centers of the galaxies and lower near the outskirts. As mentioned earlier, this is likely because galaxy formation proceeds from the inside out. 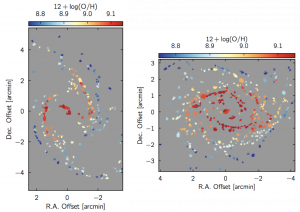 Figure 2. Gas-phase metallicity maps of NGC 1365 (left) and NGC 2997 (right). Blue corresponds to low metallicity, and red is high metallicity. Note that metallicity is defined as 12 + log(O/H), which is the relative abundance of oxygen to hydrogen. (Oxygen emission lines are easy to measure, so oxygen is usually used as a proxy for total gas-phase metallicity.) Figure 3 from Paper I and Paper II.

But this is old news. We want to know about the secondary metallicity patterns due to variations around the disk! So the authors subtract out the average radial metallicity gradient and consider the residuals in Figure 3. They also identify the star-forming spiral arms in these galaxies (by looking at Hα maps, since the Hα line is a tracer of star formation). Figure 3 shows that the metallicities in the spiral arms are higher than the metallicities outside of the spiral arms! 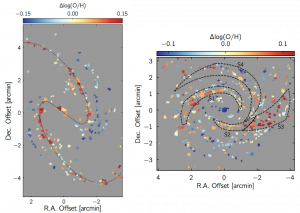 Figure 3. Gas-phase metallicity maps of NGC 1365 (left) and NGC 2997 (right), but now the average radial metallicity gradient has been subtracted! Again, blue corresponds to low metallicity, and red is high metallicity. Spiral arms are marked with dashed lines. Figure 7 from Paper I and Paper II.

But what does it all mean?

In Paper I, Ho et al. propose a physical model that might explain the patterns they observe in NGC 1365. They argue that the main process driving the gas-phase metallicities within galaxies is self-enrichment. In this process, massive stars release heavy elements when they die… but these metals can’t travel very far from where they were produced. Since new stars are also more likely to form where previous stars were (this is sometimes called “sequential star formation”), the same regions will slowly become enriched with heavy elements over and over again.

This process continues for a region of gas flows around the disk of a galaxy, until the region hits a spiral arm. The spiral arm acts like a traffic jam; it compresses the region of gas, triggering star formation and causing clouds to collide. This lets gas mix more efficiently, so previously high-metallicity regions get diluted downstream of the arm—producing the observed metallicity pattern, where spiral arms have higher metallicities than the inter-arm regions.

In Paper II, Ho et al. also show that these metallicity variations are hard to detect unless you have really high-resolution and high signal-to-noise measurements, like they did in these papers. So to better understand these metallicity patterns and the physical processes driving them, we need deep, high-resolution spectra. Hopefully TYPHOON and other surveys will continue this work and take these measurements for other galaxies!