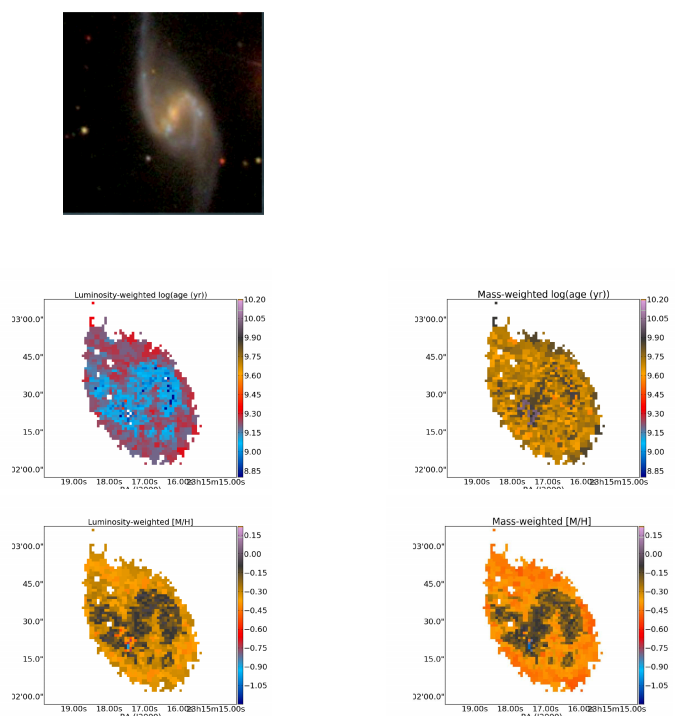 Figure 1. Age and metallicity maps weighted by both luminosity and age plotted against RA (x-axis) and Declination (y-axis) for one barred galaxy of the author’s sample from CALIFA, shown in the top left optical image. Blue colours denote both young and metal rich populations in the disc; the younger, higher metallicity populations tend to lie on the spiral arms and bar. Figure 3 from Sánchez et al. 2014

Recent observations have shown that over half of massive, local disc galaxies have a galactic bar, even our own Milky Way is now thought to have one; yet we still don’t fully understand how these structures are influencing the assembly and evolution of a disc galaxy. Simulations of the formations of galaxies have shown that the interaction of the bar with the spiral arms of a galaxy can cause the migration of stars towards to the centre of the galaxy. All of this must occur without heating the disc, otherwise the disc nature of the galaxy would be destroyed.

One of the results of this migration would be to mix up the different chemical abundance (metallicity; remember Astronomers call everything heavier than Helium a `metal’) stars. For example older stars, will have less metals because they formed earlier out of purer Hydrogen gas, whereas younger stars form later out of gas that has been enriched by previous generations of supernovae. Typically we find that in a disc galaxy, the older populations of stars reside in the centre with the younger stars further out in the disc. If a bar can then cause a big mixing of all of these stars then we shouldn’t see such an obvious difference in the age or metallicity of populations in the different locations of the galaxy.

Observing this directly is a little difficult but the authors of this paper attempt to compare the age and metallicity gradients of a sample of spiral galaxies with and without bars from the CALIFA survey. They start with the spectrum of a galaxy and fit to it using a combination of spectra of different types of stars (stellar population models) that are needed to create the flux and emission lines observed.They can then weight by either  the mass or the flux to obtain the age and the metallicity ([M/H]) for a given galaxy across the disc. An example map of one barred galaxy NGC7459 is shown in Figure 1. 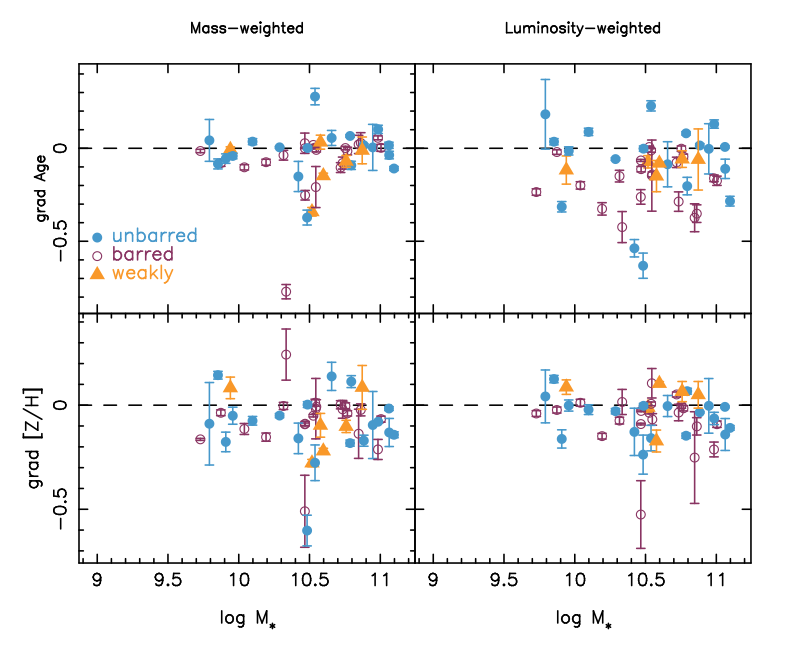 Figure 2. Age (top) and metallicity (bottom) gradients against stellar mass for the unbarred, barred and weakly barred galaxies in the sample from CALIFA. All galaxy types are consistent with a flat gradient. The barred galaxies do not exhibit different gradients to the unbarred. Figure 6 in Sánchez et al. 2014.

The authors then quantify the variation of the age and metallicity across the disc by calculating the gradient of each parameter across the disc; they plot these values as a function of the stellar mass for the barred, unbarred and weakly barred galaxies in their sample. This is shown below in Figure 2. Contrary to the predictions of the simulations the authors of this paper do not find any difference in the gradients of barred and unbarred galaxies. The authors also confirm with a statistical test that the difference between the mean values of barred and unbarred galaxy gradients is not significant. Another interesting point to note is that there is no trend of the gradients with the stellar mass.

The authors therefore raise the question of how reliable the simulations are at predicting the influence of a bar on the evolution of  a disc; perhaps the coupling of the bar and the spiral arms is much weaker than originally thought? Or perhaps if bars are not long-lasting, robust structures in discs (as proposed by other simulations) and are instead a phase that the disc can go through, then we would not expect to find any difference with the unbarred galaxies because they may have hosted a bar previously in their lifetime.

Suffice to say, the simulations have some catching up to do…