Determining the relationship between galaxy stellar mass and metallicity (aka the MZ relationship) is crucial to understanding how galaxies evolve. Metals (i.e., elements that are heavier than Helium) are made in stars via nuclear fusion and are injected into the interstellar medium through stellar winds and supernovae. Thus as galaxies increase their stellar mass their metallicity will increase too. Furthermore, Oxygen, which forms in the late stages of the evolution of massive stars, is usually one of the most abundant metals and thus acts as a good tracer for determining the metallically of a galaxy. In this article, the authors measure the Oxygen abundance and stellar masses for a large sample of star-forming galaxies at five different redshift epochs ranging up to z~2.3 to infer the MZ relationship as a function of stellar mass and also as a function of universe age.

The authors obtained data for nearly 56,000 star-forming galaxies in redshift bins for z (universe age) ~0.08 (12.4 Gyr), 0.29 (10.1 Gyr), 0.78 (6.7 Gyr), 1.41 (4.4 Gyr), and 2.26 (2.8 Gyr). The stellar masses are determined by estimating the mass-to-light ratio for their galaxies by fitting the spectral energy distribution, which is a plot of the brightness of the galaxy as a function of frequency,  with stellar synthesis models (i.e., tools that determines what population of stars matches the observed integrated light for galaxies) . They assume the stellar population is described by a Chabrier initial mass function and a star formation rate that decreases exponentially with time. In other words, given a star formation rate the Chabrier initial mass function tells you how many stars you would expect and what their masses should be, the stellar population synthesis models tells you what the integrated star-light from the population of stars will look like at a given time. This, in turn, tells you the mass-to-light ratio, which you multiply by the total integrated light of the galaxy given by the spectral energy distribution to obtain a stellar mass. 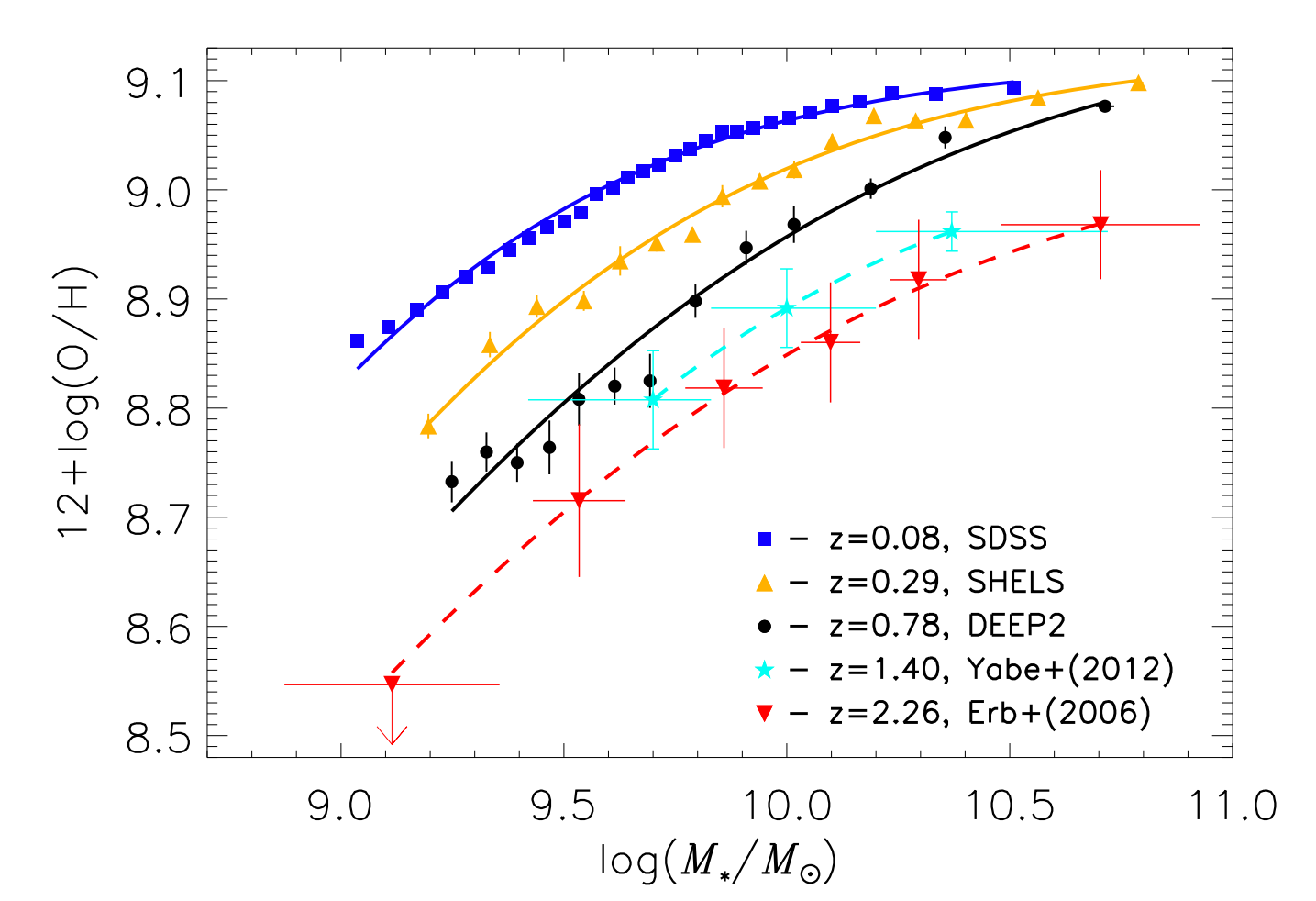 The MZ relationship at five epochs up to z~2.3.

Next the authors determined the metallicity of the galaxies in their sample from measuring the ratios of the strength of multiple Oxygen, Hydrogen, and Nitrogen emission lines. The figure above shows their results. The survey data, used for z<1, are sorted into equally populated bins of stellar mass and the data points represent the median stellar mass and metallicity for each bin. The data points for the z>1 sample is determined by stacked spectra sorted by stellar mass. This figure shows that at fixed stellar mass the average metallicity increases as a function of cosmic time since z~2.3 and also that the shape of the MZ relation evolves with time which suggests that the evolution is mass-dependent. In other words, at high stellar mass you see that the MZ relationship starts to flatten out for z<0.8. Furthermore, at fixed stellar mass the more massive galaxies enrich more rapidly as compared to their low-mass counterparts for z≥0.8.

In order to see how stellar mass effects the metallicity evolution of their sample the authors also plot the scatter in the MZ relation as a function of stellar mass, shown in the figure below. This scatter is defined as the difference between the upper and lower limits of the 85% and 50% contour obtained from their metallicity measurements. The top panels of the figure show the upper and lower limits containing the central 85% (A) and 50% (B) of the metallicity distribution as a function of mass for the z<1 galaxies. That is, they divided their samples in two for this analysis. The bottom panels show the difference between these limits (85% – C and 50% – D). 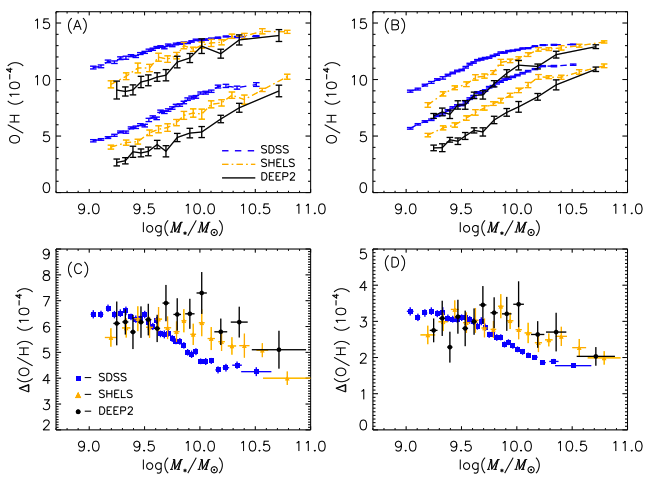 The top panels show that the flattening (i.e., decreasing slope) of the MZ relationship, at high stellar masses, is mass-dependent for the z<1 sample and also that the metallicity distribution reaches a constant value (i.e., saturates) for the high-mass galaxies. Furthermore, the fraction of saturated galaxies at a fixed stellar mass increases at late times. This “metallicity downsizing” agrees with galaxy downsizing in which massive galaxies tend to form their stars earlier than low-mass galaxies. Hence, at late times the star formation rate of low-mass galaxies increases allowing for continued metal enrichment whereas it decreases for massive galaxies causing the metallicity to saturate. This is easily seen in the lower panels in which the scatter of the difference between the upper and lower limits of their samples decreases with increasing mass at high masses. These results show that the MZ relation flattens with cosmic time.