Disclaimer from the author: Evan Kirby is my advisor.

Blast from the past

The term “dwarf galaxies” is a bit of a conundrum. On one hand, it’s pretty accurate—dwarf galaxies are, as the name suggests, smaller and lower-mass than typical Milky Way-like galaxies. (Although it’s worth noting that the definition of a “dwarf galaxy” varies wildly depending on what you work on and who you talk to.)

On the other hand, “dwarf galaxies” can also imply that they’re just like miniature versions of normal galaxies. And that’s not true at all: dwarf galaxies are an incredibly diverse population in their own right, with a whole lot of exciting science behind them!

Just ask Professor Evan Kirby from Caltech, who has built his entire career on nearby dwarf galaxies. Kirby is giving a plenary lecture at #AAS232. In his talk, appropriately titled “Dwarf Galaxies: Laboratories for Nucleosynthesis and Chemical Evolution,” he’ll start by discussing why exactly these galaxies are useful laboratories for chemical evolution. 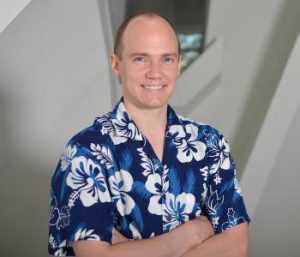 “The short answer is that dwarf galaxies are very numerous,” Kirby says. They’re also diverse, with a wide range of properties like stellar mass and star formation history. “Much like the classic scientific method that you learn in middle school,” you can vary one of these properties and “see how the dependent variables change.”

But just because they’re simple in some ways doesn’t mean dwarf galaxies are boring. It turns out that the chemical compositions of these galaxies can actually give clues about the past. To study these compositions, Kirby’s group measures stellar metallicities. These are simply the abundances of elements heavier than helium (which astronomers call “metals” because we’re bad at chemistry) in stars in nearby dwarf galaxies (Figure 2). 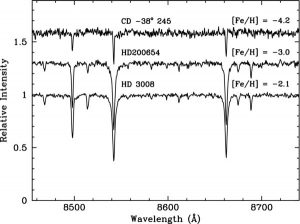 Figure 2. The observed spectra of 3 stars with different metallicities [Fe/H]. Iron (Fe) is often used as a proxy for total metallicity, mostly because it’s easy to measure. Astronomers usually write elemental abundances as logarithmic ratios relative to the sun (I know, it’s terrible, we are so sorry): [Fe/H] means log10(amount of iron in the star / amount of hydrogen in the star) – log10(amount of iron in the Sun / amount of hydrogen in the Sun). In this notation, a star with [Fe/H] = 0 has the same metallicity as the Sun. (Credit: Fulbright et al. 2010)

Because the metallicity of a star depends on whatever chemical elements that were around when it formed long ago, stellar metallicities probe the past chemical abundances in a galaxy. These can be used to study the production of different elements in the galaxy over time, a technique sometimes called “galactic archaeology.” (You can learn more about the details at Kirby’s group website.)

To be honest, I already hear about dwarf galaxies all the time (since Kirby is my advisor). So when I did this interview, I was particularly interested in hearing more about his career path.

“Actually, it’s a pretty nerdy way that I got into astronomy,” Kirby says. He originally wanted to be an astronaut—“when I was a little boy, I used to watch Ernie on Sesame Street fly upside down in his airplane, and I was like, ‘I’m gonna do that’”—and almost applied to the Air Force Academy. But when he was an undergrad studying physics, the acceleration of the expansion of the universe had just been discovered. Kirby thought “it was the coolest thing ever,” and that eventually propelled him into astronomy research.

His first research project was in cosmology, where he studied the cosmic microwave background. It wasn’t until Kirby started grad school that he started working on dwarf galaxies, partly just because his advisor had access to a dataset that made it “opportunistic” to study the compositions of dwarf galaxies.

What advice does Kirby have for students who are just starting research (or his grad students, like me)? “Don’t stress out so much! My biggest regret from college is not getting a music minor, cause I’m a huge music nerd,” he says. (As his student, I can confirm that he has practiced clarinet during past observing runs.) “Make room for the things that are not science-related that spark passion, because that’s really important.”

If you want to learn more about Dr. Kirby’s work (the science-related stuff, not the music), come check out his plenary talk bright and early at 8:30AM tomorrow on Thursday, June 7 at #AAS232.