Title: The Skeleton of the Milky Way

How many spiral arms does the Milky Way have? You might be surprised to learn that astronomers are still not completely sure. Unlike other galaxies that we can see face-on, our location in the Milky Way makes it hard for us to determine the structure of our own home galaxy.

CO and the Milky Way

Figure 1: The velocity-integrated map of CO, which traces out the distribution of H2 in the Milky Way. The color indicates the density of the molecular gas. From Dame, Hartmann, and Thaddeus (2001). To see a bigger image, check out this link: https://www.cfa.harvard.edu/mmw/Fig2_Dame.pdf)

However, when piecing together the three-dimensional structure of the galaxy this way, it can be difficult to distinguish overlapping features and finer details. Astronomers also use a combination of other methods to get a more complete and detailed picture of the Milky Way. These include measurements of parallax and proper motions of masers, maps of dust extinction, and millimeter-wavelength surveys of the Galactic plane. The authors of today’s paper outline yet another way to study the structure of the Galaxy on large scales by looking at long, thin infrared dark clouds (IRDCs) that they call “bones.” They hypothesize that these bones trace out the densest parts of the Milky Way’s spiral arms, thus forming the “skeleton” of our Galaxy and delineating its three-dimensional structure. In today’s paper, they explore ten bone candidates, six of which they believe mark out important spiral features.

Infrared dark clouds are so named because they appear as dark extinction features that we can see silhouetted against molecular clouds in the infrared. Continuing on their hypothesis that bone-like, filamentary IRDCs can trace out the locations of the Milky Way’s spiral arms, the authors use mid-infrared imaging of the Galactic plane to search for bone candidates where the spiral arms are supposed to be. Earth is actually located about 25 parsecs above the Galactic plane, so we do have a little perspective on the plane of the Galaxy. The Galactic coordinate system, which has the Sun at its center, thus has a fundamental plane that happens to be just off of the Galactic plane. This allows the authors to search for bones at predictable offsets from 0 degrees in Galactic Latitude.

After locating fifteen potential candidates with visual inspection of the mid-infrared imaging, the authors then check that each of these candidates is likely to be associated with a spiral arm. This includes having similar line-of-sight velocities along the length of the structure (no abrupt shifts of more than 3 km/s per 10 parsecs along the bone candidate), and measured radial velocities close the radial velocities predicted by the Milky Way’s rotation curve for spiral arms at those distances. 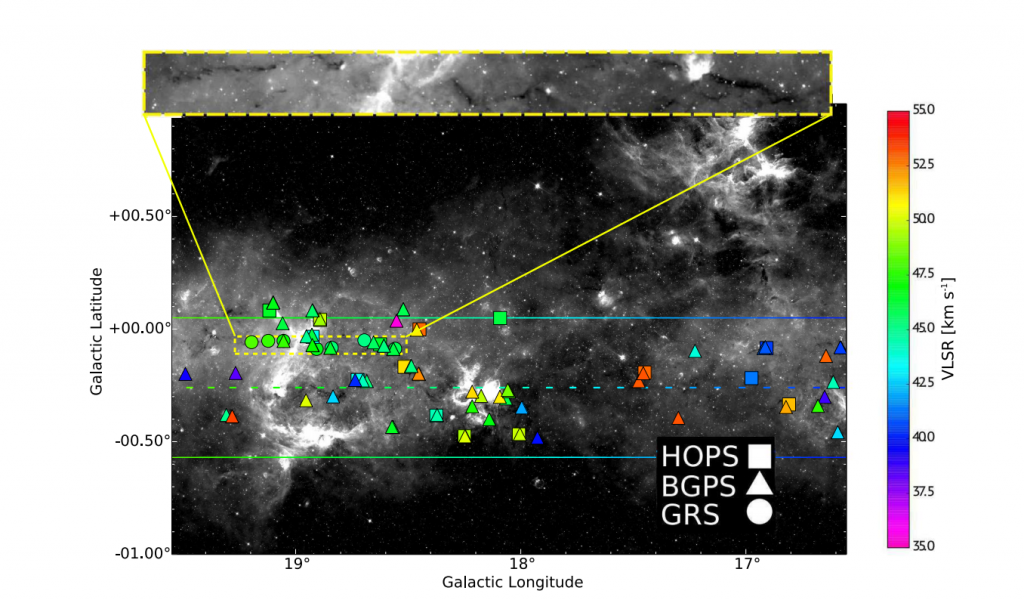 Figure 2: Figure 6 from the paper, which shows a detail of Filament 5, the best bone candidate. The background is a GLIMPSE-Spitzer 8 micron image, the dashed line across the figure indicates the location of the Galactic mid-plane, and is color-coded with velocities from Dame & Thaddeus (2011). The solid colored lines on either side indicate the +/- 20 pc from Galactic midplane at the distance of the Scutum-Centaurus model, indicating that the filament lies within 15 parsecs of the Galactic plane. Finally, the yellow-boxed inset shows Filament 5 in greater detail. The squares, triangles, and circles correspond to sources from various radio surveys.

Six of their ten bone candidates meet all six of their bone criteria, to varying degrees. While some of them are are low-grade bone candidates the authors keep all six of them in their catalogue, because they believe that the features could all be bones in various stages of evolution. Filament 5, their strongest bone candidate, and can be seen in detail in the inset of Figure 2. This filament is very close to parallel to the Galactic mid-plane, has strong velocity contiguity, almost exactly matches (within 1-2 km/s) the fit for the Scutum-Centaurus arm, and possesses an aspect ratio of 140:1.

The authors are optimistic that these results and future studies of other bones can eventually be used to help pin down models of the spiral arms with great accuracy (they estimate to about 1 parsec). With the help of a skeletal model of the Milky Way, we might finally be able to answer fundamental questions about its three-dimensional structure.