Wonderful Miras in the Heart of the Galaxy

Title: Discovery of carbon-rich Miras in the Galactic bulge 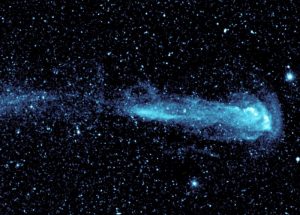 Figure 1: The tail of material ejected from Mira’s atmosphere stretches 13 lightyears behind it. This image was taken in the UV. Credit: NASA/JPL-Caltech/C. Martin (Caltech)/M. Seibert(OCIW), edited by earthsky.org.

Mira-type variables are stars at the very end of their lifetimes: giant stars in the process of throwing off their outer layers. They consist of a dense core not much bigger than the Earth, several onion-like layers of burning hydrogen and helium, and a puffed-up outer layer which is only loosely bound to the star. They pulsate on periods lasting several months or years, and cast away a bit more of their atmosphere on each pulsation. The first known member of this class, Mira itself (known as Mira ‘the wonderful’ to early astronomers because of the way it seemed to appear and disappear annually), is followed by an amazing, comet-like tail of matter stretching thirteen lightyears behind it (see for yourself in Figure 1). Once the atmosphere is completely stripped, all that is left will be the dense core which will evolve into a white dwarf.

Astronomers love to subdivide their classifications, and so Miras are split into two subclasses: oxygen-rich and carbon-rich. The ignition of helium burning during a star’s evolution can trigger a ‘dredge-up‘ of carbon from the core to the surface; if the star becomes a Mira while this carbon is still at the surface it will be carbon-rich, whereas if it does so once the carbon has settled it will be oxygen-rich. Carbon-rich Miras are therefore generally younger. 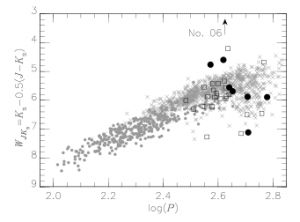 Figure 2:  The brightness of Miras against their period of pulsations. The carbon-rich Miras in this paper are shown as black circles. The grey crosses show how bright Miras at the Galactic centre would be expected to be. Mira no. 6 from this paper is clearly much brighter than expected, with another two being marginally brighter. These Miras are probably closer than the Galactic centre, while the other five are likely to be in the Galactic centre. Source: Figure 8 from today’s paper.

Miras in the Galactic Centre

The authors of today’s paper were searching for carbon-rich Miras in the galactic centre (a.k.a. the bulge). To do this they found a set of eight Miras that are in the direction of the bulge, and estimated their distances based on magnitudes and periods (see Figure 2). For Miras there is a correlation between how bright they are and how quickly they pulsate, as there is in other pulsators such as Cepheid variables. Today’s authors found that five of their systems were likely to be in the galactic centre itself, with the other three more likely to be between us and the centre. In Figure 3 you can see the lightcurves of some of these systems (lightcurves are their brightness variations over time).

From the carbon-rich nature of these systems, it seems that their age is around 0.5 to 3 billion years — relatively young in star years (our own sun is around 5 billion years old). Stars in the galactic centre are generally older than this, and once upon a time it was argued that the galactic centre population was made up entirely of old stars. This research is one of a string of recent discoveries that suggest the population is more complicated, with some younger stars among them.

That said, there are other possible explanations for why these Miras look so young. Since the evolution of a star is mostly determined by its mass (a more massive star evolves faster), a young-looking star can be formed by two stars merging together to form one higher-mass star. From the point of the merger, this star would follow the evolutionary track of a high-mass, fast-evolving star, and so it can look like an out-of-place young star in an old stellar population. These Mira stars could have evolved by that route. It’s also possible that they could have been picked up from a dwarf galaxy passing nearby. Or, perhaps, the carbon could be stripped from companion stars in binary systems with the Miras, rather than originating in the Miras themselves.

To try to distinguish between these possibilities, the authors plan to look for more of these systems in the galactic centre and study their distribution and movements in more detail. There’s more to learn from this intriguing problem. 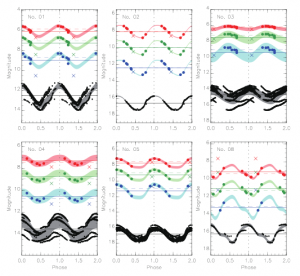 Figure 3: Lightcurves of a selection of Miras from today’s paper as  a function of pulsation phase (ie consecutive pulsations are overplotted). Different colours represent different wavelengths. In the black in particular you can see how much a Mira pulsation can change from one cycle to the next. Miras no. 01 and 03 are believed to be closer to us than the Galactic centre, while others are believed to be at the centre itself. Source: Figure 4 in today’s paper.

New twinkles in the sky