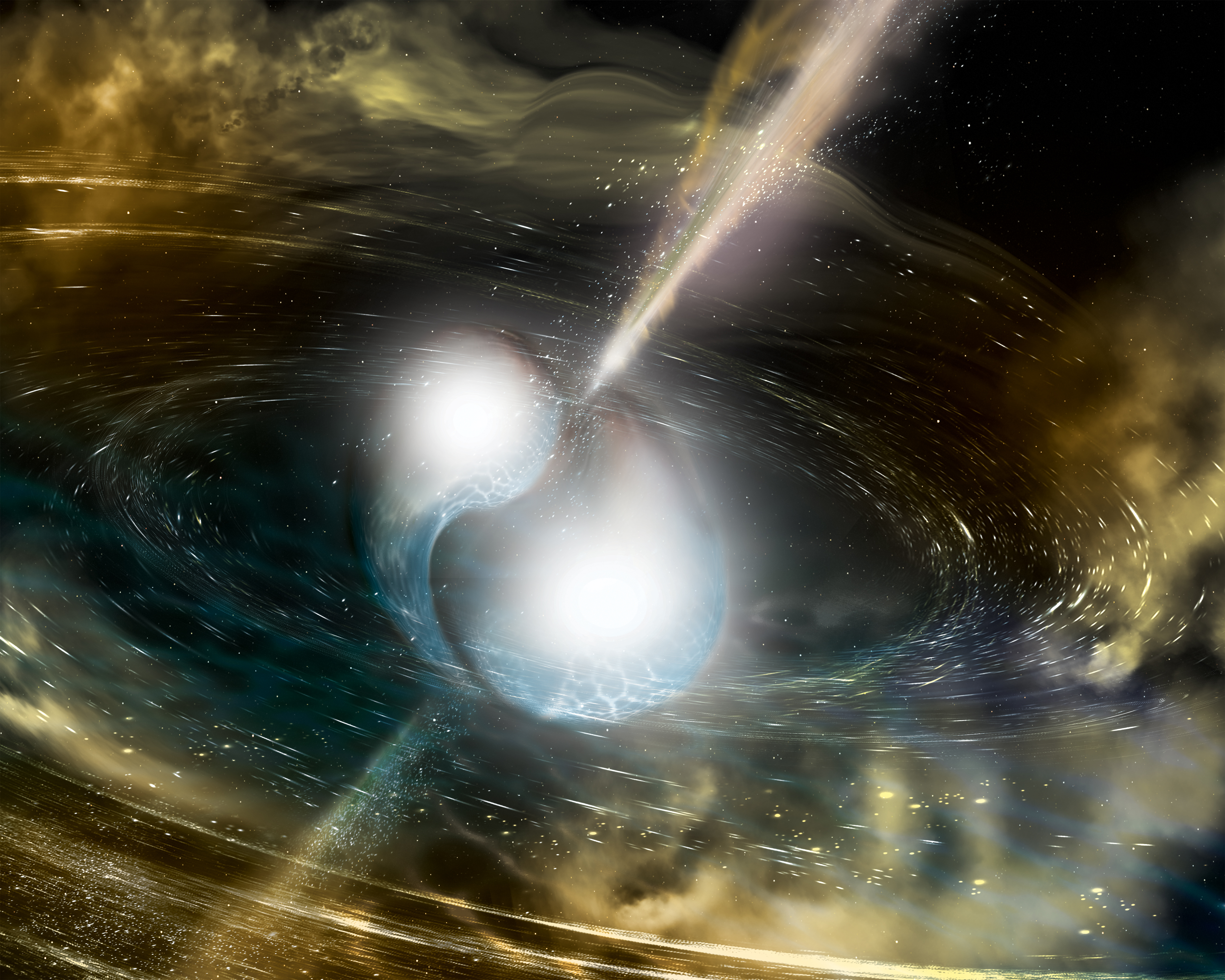 Artist’s illustration of two merging neutron stars. The narrow beams represent the gamma-ray burst while the rippling spacetime grid indicates the isotropic gravitational waves that characterize the merger. Swirling clouds of material ejected from the merging stars are a possible source of the light that was seen at lower energies. Credit: National Science Foundation/LIGO/Sonoma State University/A. Simonnet.

On August 17, 2017, ripples traveling along the fabric of spacetime passed through a small planet after more than a 100 million year journey, gently stretching and squeezing the pale blue dot by fraction of an atom. Moments later, a split-second burst of high-energy gamma rays finished their journey to our little speck of dust in the Milky Way, with a rainbow of light across the electromagnetic spectrum in its wake. This flurry of information was the long-sought-after holy grail of multi-messenger astronomy.

The ripples in space, or gravitational waves (GWs), came from two objects called neutron stars — the remnant cores of long-dead stars as dense as an atomic nuclei, with masses comparable to our Sun packed into the size of a city. The LIGO/Virgo network of three gravitational-wave interferometers witnessed the last 100 seconds of the final inspiraling dance and collision, after the two objects lived and evolved together for possibly billions of years. This event was subsequently named GW170817. Figure 1 shows the final 30 seconds of the inspiraling dance, growing in frequency and in amplitude as the neutron star orbit shrinks and emitted gravitational waves become stronger.

However, this is only the beginning of the story. 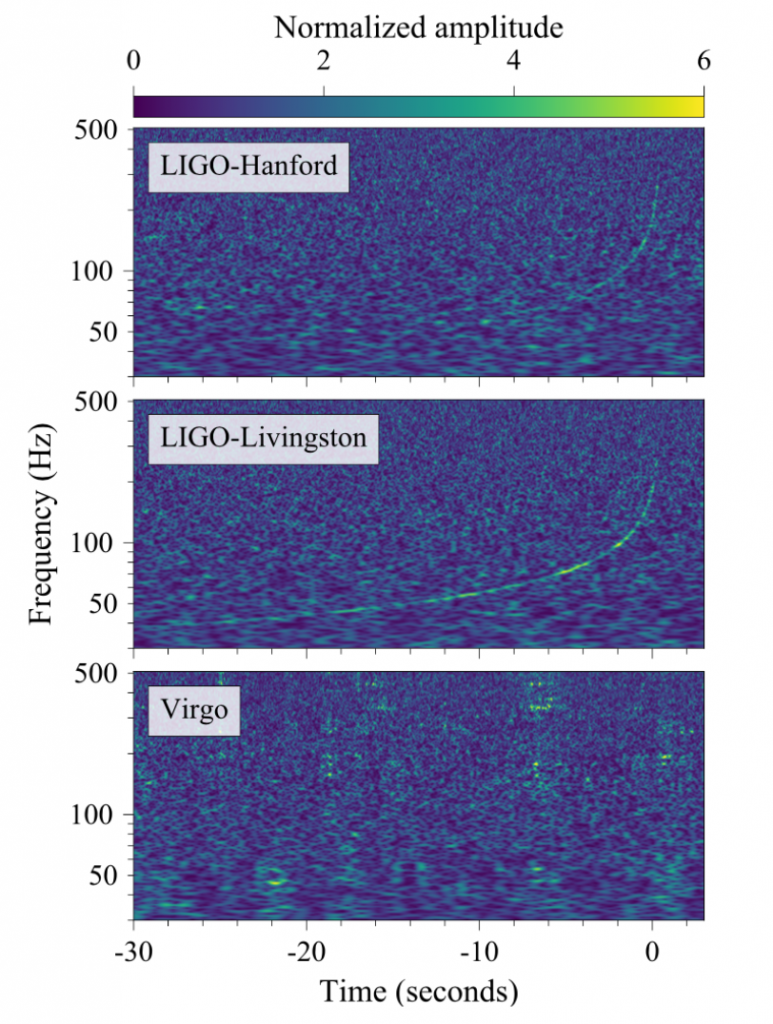 The spectrograms of GW170817 signal in the Hanford Livingston, and Virgo detectors. The binary signal shows a characteristic chirp  — increasing in frequency and in amplitude as the system inspirals closer and closer together. Figure 1 in the BNS Discovery Paper.

In 2015, LIGO made the first observations of gravitational waves from the inspiral and merger of two black holes, designated GW150914, and since has confidently detected 3 more systems of binary black holes (with the help of Virgo on the most recent discovery — GW170814).

Based on the gravitational-wave signal, we can gain a great deal of information about the BNS, such as the masses of the two neutron stars, how fast they are spinning, and how far away they merge. The best-measured property of the system that can be gleaned from a GW inspiral is a combination of the two masses known as the chirp mass. This quantity is the primary driver of the “chirp” signal that can be seen in Figure 1. However, other parameters of the system which have higher-order contributions to the signal can also be gleaned from the data. The masses of the neutron stars were found to be 1.17–1.6 times the mass of the Sun, consistent with binary neutron star systems we have found in our own Milky Way. But what object was created when they merged? Turns out, we don’t know! It could either be one of the most massive neutron stars ever observed, or the lightest black hole ever observed!

The neutron stars merged about 130 Million light-years away — meaning they collided when the dinosaurs were still roaming the Earth, and have been traveling towards our planet every since. Though this seems far, this is in fact very close for an event to be detected with gravitational waves (about 11 times closed than GW150914). Furthermore, the much lower masses of the neutron stars compared to their black hole counterparts means that they spend far longer in LIGO’s sensitive band, completing about 1500 orbits in band (compared to the ~10 orbits in the case of first GW150914). The combination of its close distance, the long time in band, the increased sensitivity of the detectors, and the addition of Virgo into the interferometer network made GW170817 the loudest GW signal yet!

Possibly most important to the story, GW170817 was localized to a much smaller region of the sky than previous GW events — about 30 sq degrees (great for GW localization, but still fairly large, as 30 sq degrees in the sky could comfortable fit 150 full moons!) As neutron stars are made of matter (unlike black holes), they are expected release large amounts of light across the electromagnetic spectrum when they merge.

Let There Be Light

In addition to the amazing science we can do with the gravitational waves alone, the detection of an electromagnetic counterpart to the event has connected a number of astrophysical phenomena, including neutron stars, short gamma-ray bursts and nucleosynthesis of heavy elements.

Very quickly after the initial detection by LIGO, gamma-ray telescopes Fermi-GRB and INTEGRAL detected a very faint burst of gamma-rays which lasted only a couple of seconds. This discovery definitively linked neutron star mergers with so-called short gamma-ray bursts (SGRBs). Mysteriously, this SGRB is orders of magnitude dimmer than most SGRBs, although the reason for this is still unknown.

Following the internal announcement from LIGO of a neutron star merger, many teams around the globe pointed their telescopes towards the sky in search for the event. Just eleven hours after the merger,  the One-Meter, Two-Hemisphere (1M2H) team first announced the discovery of a new optical transient in the nearby galaxy NGC 4993. 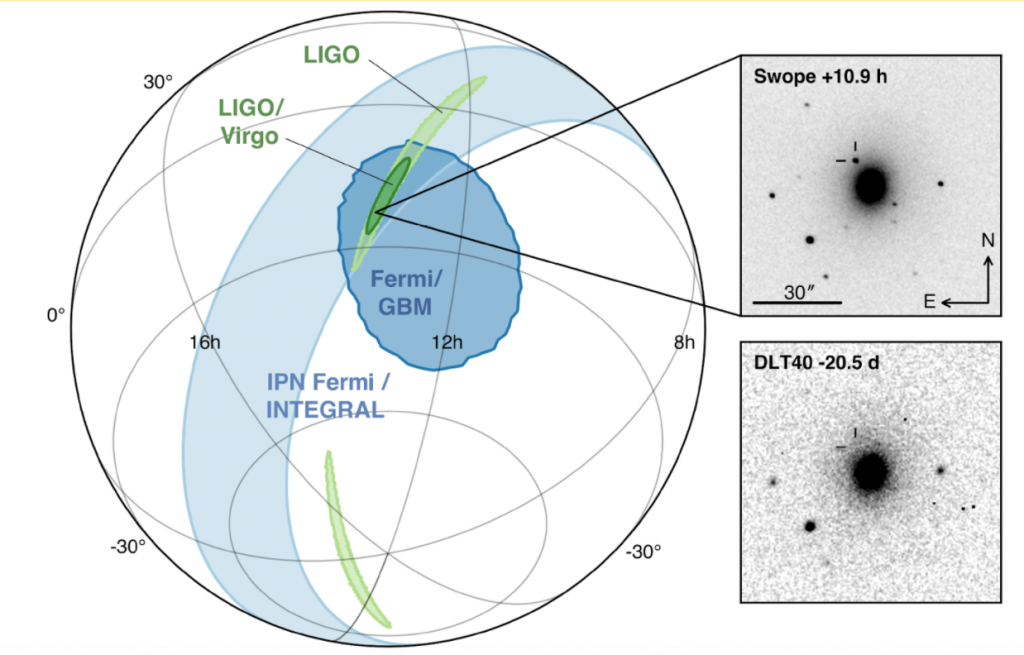 Localization of the merger by LIGO (light green), LIGO/VIRGO (dark green), INTEGRAL (light blue) and Fermi/GBM (dark blue). On the right are the discovery images of the associated kilonova from Swope and the Distance Less Than 40 Mpc (DLT40) survey. Figure 1 in the Multi-Messenger Astronomy paper.

After examining the spectrum of the transient, scientists quickly realized that this was something which had never been seen before: a kilonova. Kilonovae are thought to be the birth site of many of the heavy elements in our universe (the so-called “r-process” elements which form during a special type of nucleosynthesis that requires neutron-rich environments).

Finally, weeks after the original discovery, teams observed brightening of the source in both X-rays and radio waves. This was consistent with the afterglow of the SGRB, or the emission seen from the interaction between the original gamma-ray burst and the surrounding environment of the merger. This final emission should remain bright enough to see even now and for several weeks to come.

Advanced Ligo (and Virgo) have only been on for two years and has already opened a new branch of astrophysics. Who knows what it has in store for us in the future!

Disclaimer: This Astrobite was written by Ashley Villar and Mike Zevin, who are coauthors on these papers.