Gamma-ray bursts (GRBs) are famous for being the brightest astrophysical explosions, boasting apparent energy releases of up to 8.8 × 1054 erg (about five times the sun’s mass in energy). If the burst lasts for fewer than a couple seconds, it is classified as a short GRB — thought to be the result of neutron star mergers. Long GRBs, with durations between a few and hundreds of seconds, are thought to arise when a massive star undergoes core collapse, producing jets from accretion onto the star’s massive remnant (referred to as the collapsar model). One critical piece of evidence supporting this model is the majority of long GRBs being accompanied by supernova (SN) signatures originating from the same location at the same time.

The paper motivating today’s astrobite gives an account of the GRB 111005A, a long-duration burst with no detected SN features. Likely associated with the galaxy ESO 580-49, this burst is the second-closest GRB ever detected (which makes it even more surprising that no SN component could be observed). The authors employed several techniques to scour the environment around 111005A for clues that might explain its apparent loneliness; however, the mystery of our missing SN has yet to be solved. In fact, this work suggests that its absence may signal the necessity of an entirely new class of long GRBs without SN associations.

The collapsar model is reliant on several assumptions about the GRB progenitor. The star in question must be young, massive, and have low metallicity, which is defined as the fraction of an object’s mass not composed of hydrogen (H) or helium (He). GRB progenitors are expected to have about half as much metal as the sun per unit mass. Because the GRB progenitor star can’t be studied directly, scientists instead measure the properties of the surrounding HII region (a cloud of ionized hydrogen). Assuming that the gas in question is thoroughly mixed, these measurements serve as a suitable proxy for analyzing the star itself.

While most estimates of GRB metallicities have been made by integrating over the entire host galaxy, improvements in spectroscopic instruments have allowed scientists to study the immediate area surrounding these bursts in impressively fine detail. In this work, Tanga et al. employ one such advanced spectrograph. The Multi-Unit Spectroscopic Explorer (MUSE) is an integral field unit (IFU) spectrograph attached to one of the four 8.2-m mirrors comprising the Very Large Telescope. MUSE is capable of outstanding spectral and spatial resolution, enabling the probing of individual HII regions around GRB progenitors.

The authors began their investigation by looking at Balmer (hydrogen) emission lines from stars near the GRB in question. From this data, they estimate that the majority of the starlight is contributed by stars between the ages of 1 and 3 Gyr (billion years). Additionally, the authors measured equivalent widths (EWs) of various spectral lines, defined by the area under the curve of spectral intensity vs. wavelength (more simply, a measurement of the width of a spectral line). EWs can be used to make estimates of stellar age, though the accuracy of that technique can be affected by metallicity and stellar rotation, among other factors. For context, the long GRB collapsar model predicts large (> 100 Å) EWs for Hα — the spectral line produced by a hydrogen electron falling from the third-lowest to the second-lowest atomic energy level. Figure 1 is a comparison between the Hα EW for GRB 111005A and GRB 980425, which is considered a canonical GRB-SN. Clearly, GRB 111005A is located in an area with low-EW spectral lines. This implies that the GRB is not in an area of recent star formation, unlike GRB 980425. The authors use this information to compute a lower limit for the age of the stellar population surrounding the burst, finding that the stars are no younger than 10 million years old. Because core collapses tend to happen in young stars, this age limit means the progenitor was older than you would expect from the collapsar model.

Figure 1. Equivalent widths of Hα spectral lines for GRB 111005A, a long GRB that does not have an associated SN, and the canonical GRB-SN 980425. Large equivalent widths are expected in long GRB environments. Figure 5 in the paper.

The last important diagnostic of the environment of GRB 111005A is metallicity. The authors express metallicity measurements as a ratio of oxygen (O) to hydrogen (specifically, 12+log(O/H); the solar value is 8.69). Using their well resolved spectroscopic data, they measured the value of 12+log(O/H) for the area around 111005A to be 8.56 ± 0.04 (see Figure 2). Long GRBs are usually found in environments with 12+log(O/H) = 8.4, meaning the conclusion that GRB 111005A had a metal-rich progenitor (only slightly lower than solar metallicity) is well founded. 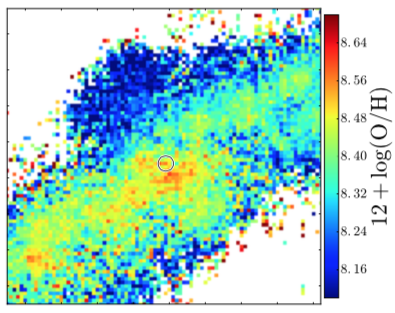 Figure 2. Observed map of oxygen abundance (12+log(O/H), the ratio of oxygen to hydrogen) around GRB 111005A, marked with an open black circle. Figure 7 in the paper.

What could we have missed?

Readers acquainted with astronomy literature likely understand the cruel tricks dust can play during astronomical observations (unless, of course, you’re studying the dust itself). Perhaps dust in the host galaxy could block the SN signal, leading us to a spurious conclusion? Indeed, GRB 111005A is obscured by a significant amount of dust. Even so, the associated SN would be weaker than GRB 980425’s by three to four magnitudes (depending on wavelength). It is highly unlikely that dust is simply blocking the SN component of our GRB.

Truthfully, no plausible theory yet exists to explain the observed lack of SN signature.  Two other GRBs, 060505 and 060614, were observed to be missing their SN component despite being firmly classified as long bursts. Though they show evidence of being similar to 111005A, they occurred farther away and were not able to be studied with such fine resolution. Nevertheless, these three bursts suggest the possible existence of a third kind of GRB, located in regions of high metallicity and little recent star formation, and accompanied by a very faint SN or no SN at all. While various theories have been proposed to deal with SN-less long GRBs, none of them are able to reconcile the lack of SN with the apparent lack of surrounding massive stars and the high metallicity of the progenitor. It will require a significant effort to make any progress towards an answer to this mystery, as a creative and unexplored explanation appears to be necessary to explain the existence of lonely, long GRBs.