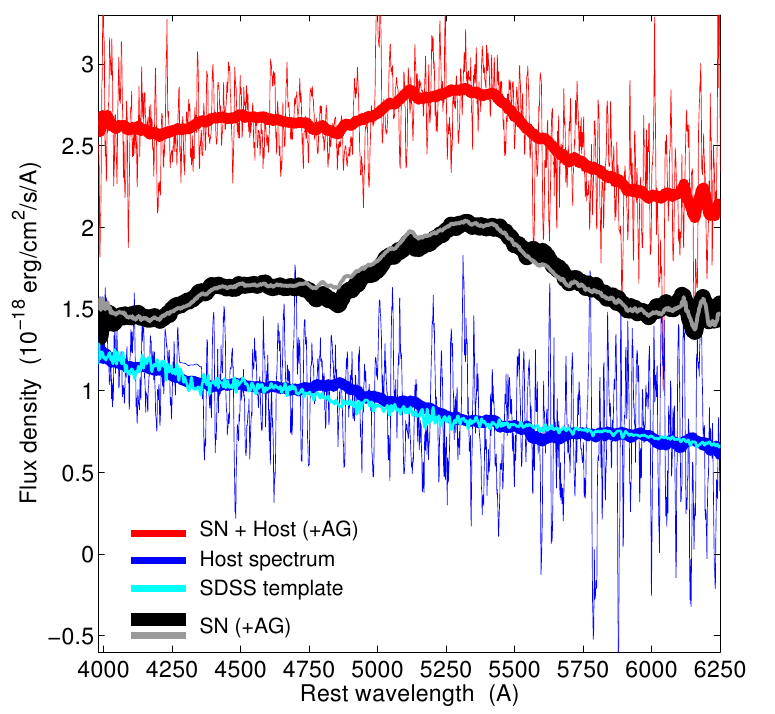 The spectrum of SN 2009nz (black), obtained from the original spectrum (red) by subtracting the host galaxy spectrum (blue). The thick lines are smoothed to de-emphasize noise. From Berger et al. 2011.

While every scientist has their own motivations, it’s probably true that most of us were attracted to this line of work by the prospect of making a discovery — making an observation or reaching a conclusion that is totally new. Making discoveries is, frankly, a little easier if you’re in the field of transient observations. In just the past few weeks, there have an unusual bounty of exciting new explosions in the sky: a star falling into a supermassive black hole (tidal disruption event, papers one, two, and three), the closest supernova to go off in years (SN 2011dh in M51, papers one and two), and what may be the sixth-ever spectroscopic confirmation of a supernova associated with a GRB. The paper we’re highlighting today makes the case for the last of these discoveries.

GRB-SNe gamma ray bursts (GRBs) that are spatially and temporally associated with a supernova (SN). In other words, they are the relativistic explosions of very massive stars. While there are many distant GRBs whose optical spectra show faint signs of supernova features, it is commonly stated that to date there have only been five “unambiguous” identifications of GRB-SNe (the most famous of these is GRB 980425/SN 1998bw). Transient astronomers are eager to find more examples, because the known GRB-SNe have some peculiar features: the GRBs have much lower gamma ray luminosities than that of normal “cosmological” GRBs (are sub-energetic) and they seem to be exclusively associated with broad-lined Type Ic supernovae (SNe with very high-velocity features, but no signs of hydrogen or helium).

In their new work, these authors present an optical spectrum of the host galaxy of GRB 091127 taken with the Gemini-North 8-m telescope. The observation was taken at a certain time after the date of the GRB such that an associated SN would be at peak brightness, time-dilated to the redshift of the GRB (z=0.490). While they see the “broad undulations” typical of SNe in their spectrum, they need to carefully subtract the spectrum of the host galaxy (taken after the SN fades) in order to isolate the spectrum of the transient.

As you can see from the figures, the spectrum is very noisy because the object is at a fairly high redshift, but the SN spectrum looks very similar to other GRB-SNe and is good enough to type the explosion as a broad-lined Ic. Moreover, the authors measure the center of the Si II feature at 6355 Å and find that it is blueshifted at a velocity of 17,000 km/s — again, typical of GRB-SNe. The authors take this as the expansion velocity of the photosphere of the explosion and combine it with the light curve properties (peak magnitude and width) to determine the explosion properties: ejecta mass (1.4 M☉), kinetic energy (2×1051 ergs), and mass of nickel powering the lightcurve (0.35 M☉). These are similar to SN 2006aj, but less extreme than the broader-lined GRB-SNe 1998bw and 2003lw 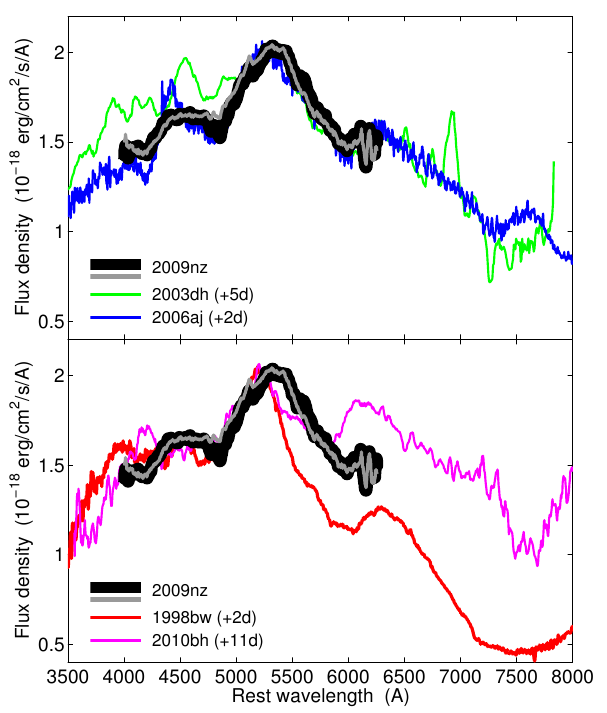 A comparison between the spectrum of SN 2009nz and other famous GRB-SNe. From Berger et al. 2011.

This newly discovered GRB-SN is interesting because it highlights the distinction between the properties of the prompt, relativistic emission (GRB) and the SN produced by stellar explosions. It has been suggested that a neutron star central engine powers the “sub-energetic” GRBs, while black holes power the “cosmological” ones. However, the SNe 2009nz and 2006aj are remarkably similar, even though the relativistic emission associated with them are starkly different: the gamma ray emission of GRB 091127/SN 2009nz was about three orders of magnitude stronger than that of XRF 060218/SN 2006aj. The authors emphasize that more events of this kind must be studied to fully understand the properties of these explosions, the engines that drive them, and their progenitor stars.