Title:  Thermal components in the early X-ray afterglows of GRBs: likely cocoon emission and constraints on the progenitors

For once, astronomers didn’t pick a catchy-but-ultimately-confusing name for an astrophysical phenomenon! Gamma ray bursts are exactly what they sound like: bursts of gamma rays. To be fair, they’re a bit more than mere bursts. GRBs are tremendously energetic; a typical GRB could release as much energy as the entire mass of our Sun converted into radiation (try plugging a solar mass into

to get a sense of how much energy that is!).

What’s more, all that energy is released in just a short period of time. As this previous Astrobite explains, GRBs are classified by their duration. Short GRBs, which are thought to be produced by neutron star mergers (like the one recently observed by LIGO), last for just a few seconds. Long GRBs last longer and are thought to be produced by core-collapse supernovae.

As shown in Figure 1, both kinds of GRBs are likely the result of relativistic jets—beams of radiation and charged particles moving close to the speed of light. Some GRBs are also accompanied by an afterglow of longer-wavelength emission (i.e., any emission that isn’t gamma rays). This afterglow can last for up to years after the prompt emission from the relativistic jet. 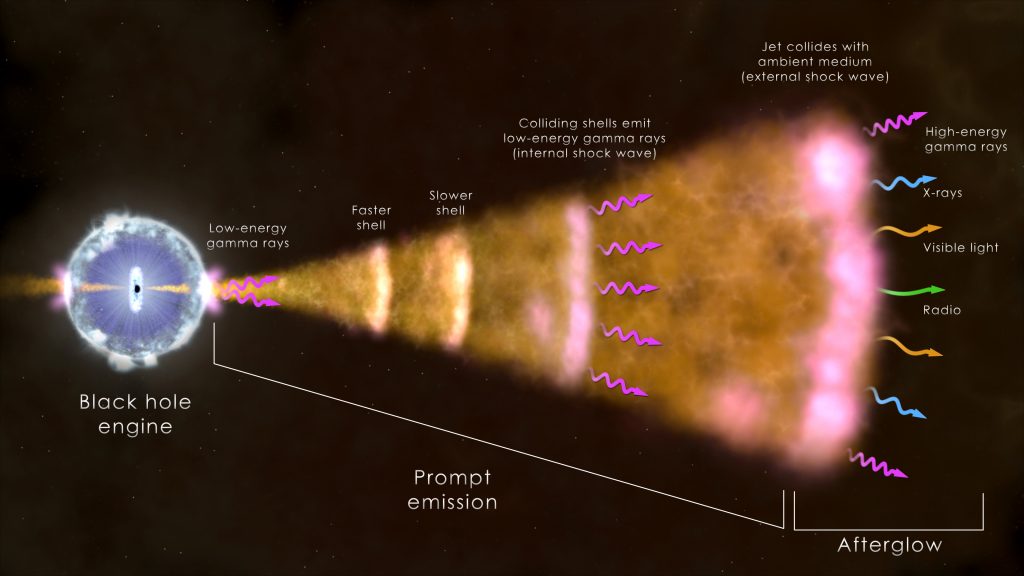 Figure 1. Parts of a gamma ray burst. Note the prompt emission produced by the jet, and the afterglow produced when the jet interacts with the surrounding medium.

In X-ray wavelengths, the GRB afterglow fades quickly at first, then transitions to a less-steep drop-off (it does other stuff after that, but we’ll ignore that for now). During these early phases, the X-ray afterglow has a spectrum that looks like a power law: flux

is some number called the spectral index. This kind of spectrum is characteristic of synchrotron emission, which is produced when charged particles spiral around magnetic field lines at close to the speed of light (Figure 2).

Synchrotron emission could easily be produced by the same relativistic jets that are thought to power the prompt gamma-ray emission. So far, so good—except this explanation doesn’t fit for all GRBs. This Astrobite from 2011 discusses the “Christmas burst,” a GRB with a strange spectrum. Instead of a power law produced by synchrotron emission, the spectrum of this burst looked like blackbody emission, which is produced by matter in thermal equilibrium. Since 2011, more GRBs have been discovered with thermal components in their spectra.

But where does this thermal emission come from? The authors of today’s paper search for more of these weird GRBs to try to answer this question.

The authors (Valan et al.) look at spectra of long GRBs measured with the Swift X-ray Telescope. As shown in Figure 3, each spectrum is fit with two different functions: 1) a typical power law, and 2) a power law plus a thermal blackbody. If adding the blackbody component significantly improves the fit, then the GRB is considered to have a thermal component.

Out of 74 GRBs studied, the authors find 6 detections of thermal components and confirm 3 previously-reported cases. It’s hard to say much with such a small sample, but Valan et al. can at least start to see what these strange GRBs might have in common.

cm), even though they have very different luminosities. This implies that the thermal emission has some characteristic radius, possibly indicating that it comes from the progenitor star rather than the relativistic jets. (Remember that we’re talking about long GRBs, which are linked to core-collapse supernovae, so the progenitor star in this case is a very massive star.)

Assuming that the thermal radiation is indeed linked to the progenitor star, the authors discuss two different physical mechanisms that could produce the thermal emission. First, they consider supernova shock breakout, which occurs when the supernova shock escapes from the surface of the star. However, models of shock breakouts don’t produce enough thermal emission to match observations. So the authors tentatively propose cocoon emission—which occurs when the relativistic jets heat the material in a star into a hot cocoon—as the mechanism behind these GRBs’ thermal components.

Finally, the GRBs with thermal components tend to have low overall luminosities. This could mean that despite the small sample size quoted in this paper, thermal components in GRB afterglows are actually fairly common, but are often drowned out by synchrotron emission.

Of course, the sample of GRBs studied in this paper is very small, so you should take all the results in this paper with a grain of salt. However, this paper hints at a physical model for GRBs that could be tested with future observations, which is pretty cool—even though gamma ray bursts are among the most energetic phenomena in the universe, we still don’t fully understand the physical processes that drive them. This paper is a good step towards improving our understanding.