Recent computer simulations are shedding light on some of the brightest and most energetic phenomena in the Universe – supernova explosions. A team of researchers at the Max Planck Institute for Astrophysics modeled the center of these collapsing stars: the formation of neutron stars in three dimensions with unprecedented accuracy. Their model demonstrated that as matter is drawn inward, it sloshes both asymmetrically and in spiral motions. It’s a bold, new look into the center of the supernova explosion and the birth of a neutron star.

As we know, massive stars end their lives in powerful explosions – outshining their host galaxies for weeks.  These so-called supernovae explosions expel gas into the interstellar medium, enriching it with the elements necessary for life.

While there is a massive explosion, there is also an implosion. The central core of the star remains, but without the outward pressure from fusion, it collapses in upon itself.  Within seconds an object that is 1.5 times the mass of the Sun is compressed to a sphere with a diameter the size of a city (approximately 12.5 miles).

What causes the implosion to reverse into an explosion? The answer contains one key element: neutrinos. As the core begins to collapse, the temperature and density skyrockets.  This produces neutrinos, which heat the surrounding gas and build pressure until a shock wave is accelerated enough to create an explosion.

This theory, however, cannot yet be proven observationally.  The difficulty stems from the fact that stellar gas obscures our view into the supernova’s core. We also cannot recreate the process in a lab here on Earth (although we’ll see in a minute that we can recreate simplified processes that play some role).  Our best chance at understanding the formation of a neutron star is in computer modeling.

Sounds easy, right? Not exactly.  Past models have been drastically over-simplified with less physics and only two dimensions.  And while we finally have the tools to correctly model the inner-workings of a supernova in three dimensions it still takes time and money.  Hanke et al. ran computer simulations for 150 million processor hours – the largest time allotted for a single project. 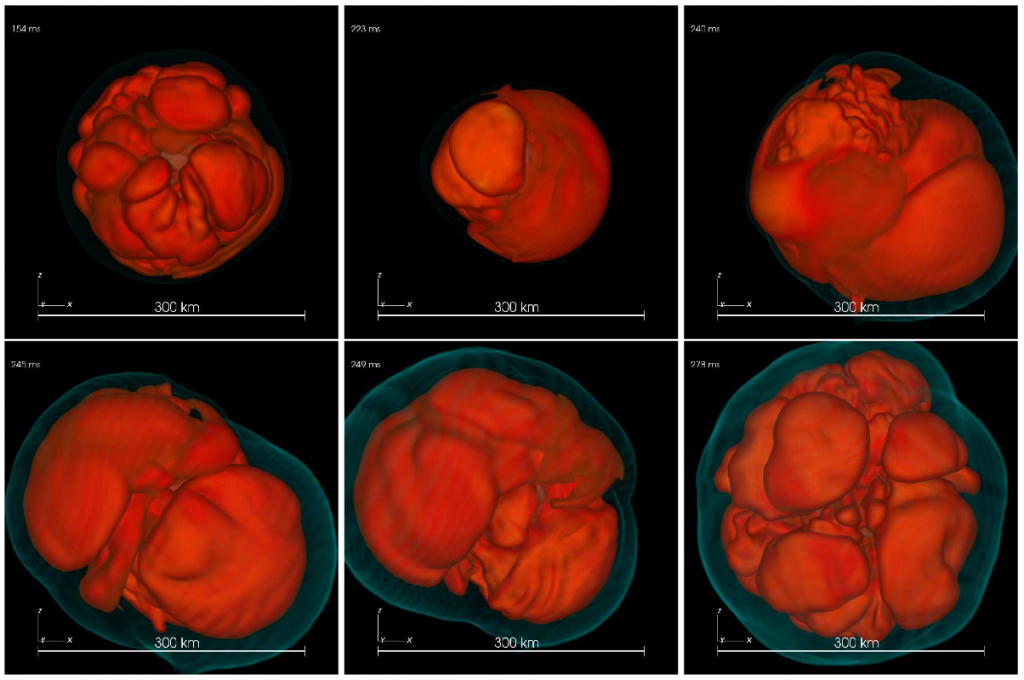 Then the data had to be analyzed and visualized before the team could reach any conclusions.  But the hard work was well worth the wait. The stellar gas performs in a manner very much like ordinary convection – the neutrinos heat the gas causing it to bubble.  There are also strong sloshing motions, which lead to strong rotational motions.

This behavior is known as Standing Accretion Shock Instability, or SASI. Essentially, the initial spherical motions of the supernova are spontaneously broken as the shock develops at large amplitudes and creates pulsating asymmetries. A simple lab experiment, the shallow water analogue, demonstrates this process.  Here the water flow between a circular reservoir and a shallow tube demonstrate the accretion flow onto the neutron star. Thus, a simplified version dynamic process can actually be demonstrated in the lab room.

Future work includes exploring in more detail the measurable effects of supernovae explosions. The SASI model correctly predicts that the neutron star will gain a large spin. This advanced computer simulation also predicts neutrino and gravitational-wave emission – effects that may be measurable from Earth. In the future, we are likely to have more observable results that confirm this new and exciting model.