Today we bring you the second post of our coverage of EWASS 2018 (the first post can be found here). Here are a few highlights from talks during the week, but first, a selfie from Dr Matt Taylor — project scientist of ESA’s Rosetta — as he was collecting the RAS service award for Geophysics for his outstanding contributions to the mission. Jon Culshaw read the citation, stating: “Rosetta was a historic achievement that would not have been anywhere near as successful, or visible, without Dr Taylor’s dedication, hard work and talent”.
Behind him you can see hundreds of European astronomers at the awards ceremony in Liverpool Cathedral.

The Cassini mission to Saturn: 13 years of discovery, Emma Bunce (University of Leicester)

The Cassini mission came to a close last year, but has left a legacy of data from its 294 orbits of Saturn and 162 moon fly-bys. Professor Emma Bunce talked us through the highlights of this enormous dataset, from the mysteries of Saturn’s atmosphere to the secrets of its tiny ice moons. 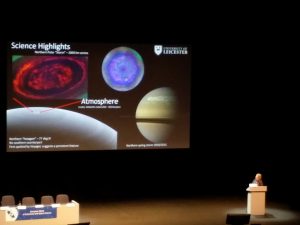 Some of the new insights from the Cassini mission include oddities in Saturn’s atmosphere: the northern hexagon and polar storms which interestingly (and inexplicably) don’t have southern counterparts, as well as the episodic Great Storm of 2010–11 that Cassini was lucky enough to capture. The most significant discoveries, however, probably come from the moons: many new, tiny moons that were discovered over the course of the mission, including shepherd moons like Daphnis which carves out ripples in Saturn’s rings as it tumbles through its orbit. We were treated to a collection of stunning images such as the half-dark, half-bright surface of Iapetus, and the sponge-like Hyperion. And targeted fly-bys of Enceladus revealed its dynamic atmosphere and plumes of water ice and dust, spewing over 100 kg of material per second into the E ring and providing much of the plasma that contributes to Saturn’s magnetosphere.

The ESO and ESA reports both drew attention to some of the recent exciting discoveries that would not have been possible without European telescopes and scientists. Last year, the number of publications using ESO data exceeded 1000. ESO Director General Xavier Barcons discussed some of the major discoveries across a whole range of fields of astrophysics, including the multi-wavelength follow-up of the binary neutron star gravitational wave detection, the Belgian-led discovery of the TRAPPIST-1 exoplanetary system, learning about the inter-planetary visitor to our solar system ‘Oumuamua, resolving the surface of nearby stars with the VLTI, and imaging protoplanetary disks. We also learned about some of the main facilities, such as the Atacama Large Millimetre Array (ALMA) and the Cherenkov telescope array, as well as new instrumentation like ESPRESSO and NIRPS, both for detecting planets via the radial velocity method.

Günther Hasinger skyped in to deliver the ESA report, echoing many of the achievements highlighted by Barcons and updating us on the Cosmic Vision 2050: the space agency’s plan for the next decades, which is divided into large, medium and small missions (L-, M- and S-class missions respectively). He emphasised the potential science advantages of having the L-class missions Athena, an X-ray telescope, and LISA, the space gravitational wave interferometer, flying at the same time. The results from these missions could help solve cosmological puzzles by investigating the X-ray and gravitational wave backgrounds in the universe, probing black holes on a much wider range of scales than is possible with ground-based interferometers like LIGO and Virgo. He hinted at the leaps we should expect in exoplanetary science, with a fleet of missions in the pipeline (CHEOPS, ARIEL, PLATO and, of course, JWST) which have science goals that include hunting for many more exoplanets as well as characterising their atmospheres. He also explained that the years 2028 – 2031 reveal a unique window in the alignment of the planets to allow access to the ice giant planets in our solar system using Jupiter for a gravitational slingshot. Collaboration with NASA on M-class missions  to Uranus and Neptune would allow for the first exploration of these planets since the Voyager fly-bys in the 1980s! These include ideas for small, “drone-like” satellites that could piggy-back on the larger projects, to make optimal use of M-mission launches.

Unique opportunity to rapidly send mission(s) to the ice giant planets Uranus and Neptune in 2031.
11 years to Uranus, 13 years to Neptune.#EWASS2018 pic.twitter.com/rio5J89EtP

We also heard an update on the Square Kilometre Array from Philip Diamond. With construction set to begin at the end of 2019, this giant telescope is the future of radio astronomy, tackling an enormous range of scientific goals from the search for pre-biotic molecules to mapping the large-scale structure of the universe (the 2,000+ page science case can be found in its entirety here for the curious). The SKA will have the sensitivity and resolution to directly image the faint “cosmic dawn” 21cm signal from neutral hydrogen in the early universe, illuminated by the very first stars and proto-galaxies. It is expected to find tens of thousands of pulsars — including several thousand millisecond pulsars, and by measuring their timing to very high precision will create a gravitational wave detector the size of our galaxy, sensitive to low-frequency gravitational waves. Some of these pulsars may be in binary systems with black holes, creating a new way to study black hole physics and further test general relativity under strong-field gravity. Astrochemistry will also benefit from the SKA: the search for spectral signatures of complex organic molecules in the environments of young stars will provide insight into how and where the building blocks for life are created. These are only a very few examples of the SKA’s vast science scope!

An inflatable half-scale model of an SKA dish had been on display in the exhibition hall throughout the conference, so it was great to find out about the design and development of this revolutionary instrument.

The project is a huge international collaboration with 10 participating countries and around 100 contributing scientific organisations, with the headquarters at Jodrell Bank Observatory near Manchester in the UK and the sites for the arrays in the deserts of South Africa and Australia. Philip Diamond showed the following video of the construction of the first SKA dish in China.

The SKA presents ambitious new technological challenges, not only in its construction but in operations as well: it will produce an amount of data approximately ten times larger than the amount generated by the entire internet today, requiring computational processing power far greater than current technology can achieve. It will push the boundaries of high-speed networks and communications, and demand new sustainable energy solutions — the dishes, in their remote, radio-quiet locations, will be far from the main power grids and as such require their own power supply. The Australian SKA pathfinder telescope at the Murchison Radio Observatory is now powered by an array of solar panels with a shielded lithium ion battery, a solution which may be scalable for the much larger SKA.