Status: To be published in the International Journal of Modern Physics D, [open access]

Today’s document shows the far-reaching goals of the next-generation gamma-ray experiment, the Cherenkov Telescope Array (CTA).  Gamma rays are important probes of cosmic rays, charged particles of which the origins and acceleration mechanisms are still unknown. Over the course of a hefty 211 pages and representing years of work, the authors explain the science goals of this experiment, which will greatly enhance our knowledge of the universe when it comes online in a few years.

Gamma rays are the radiation at the far end of the electromagnetic spectrum. Gamma rays are created in the same astrophysical processes that create cosmic rays, but since they are electrically neutral, they do not bend in magnetic field lines on their journey to Earth and therefore point back to their sources. Astrophysical TeV gamma rays, which CTA will probe, were first detected in the late 1980s. Many experiments have been built in this energy range since then, but CTA will offer improvements in sensitivity and energy range over all of the current and past experiments.

CTA will consist of two arrays of differently-sized telescopes (one in the Northern Hemisphere and one in the Southern Hemisphere) that will detect the Cherenkov radiation that is produced when a gamma ray interacts with molecules in our atmosphere.  The Southern site, in Chile, will have 99 large, medium, and small-sized telescopes, while the Northern site, in Spain, will only have 19 medium and small ones. (This discrepancy is because the inner regions of our Galaxy, one of the key science targets, is only visible in the Southern hemisphere).  These telescopes will look quite different from the conventional optical telescopes you may be used to. Veritas, one of the current generation experiments, has an explanation of their telescope design here. 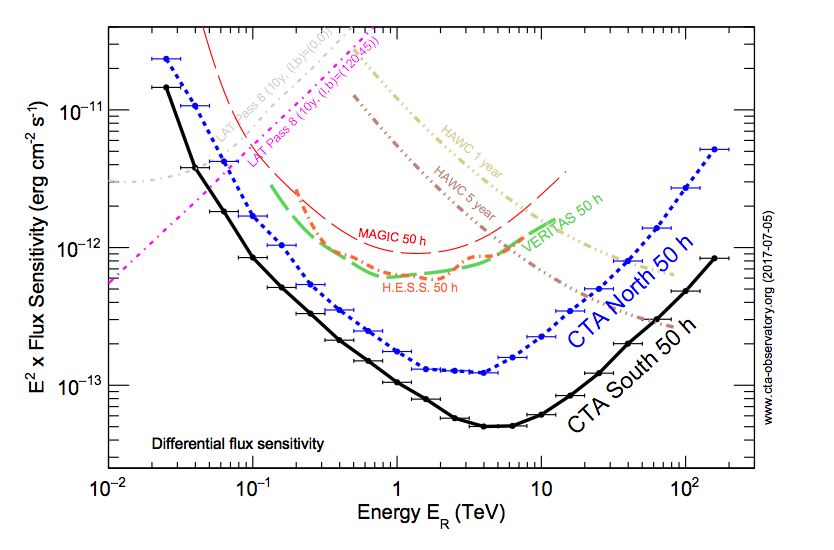 Figure 1: The differential sensitivity of CTA, as compared to current gamma-ray experiments. The curves show the particle flux needed for a five sigma detection as a function of energy. A line further down the plot means that the experiment is sensitive to dimmer sources.  (Source: Figure 1.1 from the document)

As CTA will contain more telescopes than current telescope array, it is an immediate improvement.  For example, the sensitivity will increase by an order of magnitude at 1 TeV, the angular resolution will improve (leading to the ability to image the tiny sources as well as details in larger ones) and the energy range will be from 20 GeV-300 TeV (HAWC, another gamma-ray experiment, currently has the highest energy range but maxes out around 100 TeV).

Unlike other gamma-ray experiments, CTA will be an open observatory. This means that any scientist will be able to submit Guest Observer proposals to study sources of interest.  Additionally, all data will become publicly available one year after it is collected. Approximately 40% of the observing time will be reserved for a Core Program of Key Science Projects, decided of a series of workshops over the years.

The Key Science projects are far reaching and cover many areas of astrophysics: in-depth observations of the Galactic Centre and a survey of the Galactic Plane, studies of the Large Magellanic Cloud, robust programs for extragalactic sources and transients, searches for cosmic ray PeVatrons, and study galaxy clusters, and star forming systems are just some of the science that will be covered. Additionally, there will be a dark matter program and some opportunity to study other, non-gamma ray science.

Figure 2: A zoomed in portion a simulated galactic plane, showing what CTA might expect to observe. The plot covers 20 degrees in Galactic longitude (Source: Figure 1.2 from the paper)

The questions that these science programs will answer will cover three broad themes that probe some of the biggest unknowns in our universe. Theme #1 is “Understanding the Origin and Role of Relativistic Cosmic Particles“.  This is where the Collaboration will attempt to answer questions such as the sites and mechanisms of cosmic particle acceleration and the role these particles play in star formation and galaxy evolution.  Theme #2, “Probing Extreme Environments“, will deal with the physical processes that occur close to neutron stars and black holes, including their jets, winds, and the explosions that are prone to happening in these environments.  Theme #3, “Exploring Frontiers in Physics” deals with fundamental questions about the nature of dark matter, including whether axion-like particles exist and where quantum gravity affects how photons propagate through space.

CTA will not be online for quite a few years- although the collaboration and idea has existed in some form for the better part of a decade, the sites were only chosen that year and much of the work in the last few years has been related to the telescope design.  The project is currently in a “pre-construction” phase, with construction beginning next year, the first observations happening in 2021, and the construction finishing in 2024.  When it does come online, though, it will greatly enhance our knowledge of gamma-ray astrophysics.