In the past, we’ve talked on this website a bit about the mysteries of galactic cosmic rays, or charged particles from outer space that are mainly made up of protons.  These particles can reach PeV energies and beyond, but the shocks of supernova remnants (the origin of most galactic cosmic rays) cannot accelerate particles to these high energies.  The HESS Collaboration analyzed 10 years of gamma-ray observations and have seen evidence of a PeVatron (PeV accelerator) in the center of our galaxy.  If confirmed, this would be the first PeVatron in our galaxy.

As mentioned above, the HESS Collaboration used observations of gamma rays from their array of telescopes to do this analysis.  Gamma rays are often used to probe the nature of cosmic ray accelerators; this is because they are associated with these sites, but unlike the charged cosmic rays, they are electrically neutral and therefore don’t bend in magnetic fields on their way to Earth (i.e. they point back to the source).

Figure 1: HESS’s very high energy gamma ray map of the Galactic Center region. The color scale shows the number of gamma rays per pixel, while the white contour lines illustrate the distribution of molecular gas. Their correlation points to a hadronic origin of gamma ray emission.  The right panel is simply a zoomed view of the inner portion.  (Source: Figure 1 from the paper) 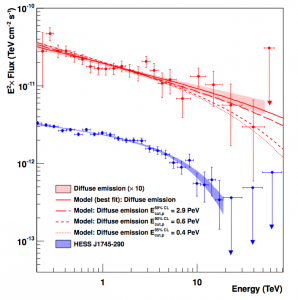 Figure 2: The red shaded area shows the 1 sigma confidence band of the measured gamma-ray spectrum of the diffuse emission in the region of interest. The red lines show different models, assuming that the gamma rays are coming from neutral pion decay after the pions have been produced in proton-proton interactions. Note the lack of cutoff at high energies, indicating that the parent protons have energies in the PeV range.
The blue data points refer to another gamma-ray source in the region, HESS J1745-290. The link between these two objects is currently unknown.

The area they studied is known as the Central Molecular Zone, which surrounds the Galactic Center.  They found that the distribution of gamma rays mirrored the distribution of the gas-rich areas, which points to a hadronic (coming from proton interactions) origin of the gamma rays.  From the gamma-ray luminosity and amount of gases in the area, it can be shown that there must be at least one cosmic ray accelerator in the region.  Additionally, the energy spectrum of the diffuse gamma-ray emission from the region around Sagittarius A* (the location of the black hole at at the Galactic Center) does not have an observed cutoff or a break in the TeV energy range.  This means that the parent proton population that created these gamma rays should have energies of ~1 PeV (the PeVatron).  Just to refresh everyone’s memory, a TeV is 10^12 electronvolts, while a PeV is 10^15 electronvolts.  A few TeV is about the limit of what can be produced in particle laboratories on Earth (the LHC reaches 14 TeV).  A PeV is roughly 1000 times that!

What is the source of these protons?  The typical explanation for Galactic cosmic rays, supernova remnants, is unlikely here: in order to match the data and inject enough cosmic rays into the Central Molecular Zone, the authors estimate that we would need more than 10 supernova events over 1000 years.  This is a very high rate that is improbable.

Instead, they hypothesize that Sgr A* is the source of these protons.  They could either be accelerate in the accretion flow immediately outside the black hole, or further away where the outflow terminates.  They do note that the required acceleration rate is a few orders of magnitude above the current luminosity, but that the black hole may have been much more active in the past, leading to higher production rates of the protons and other nuclei.  If this is true, it could solve one of the most puzzling mysteries in cosmic ray physics: the origin of the higher energy galactic cosmic rays.