Title: The Gamma-Ray Luminosity Function of Millisecond Pulsars and Implications for the GeV Excess 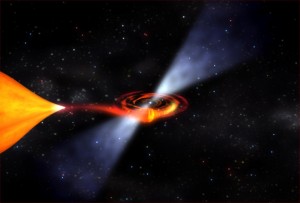 Figure 1: Illustration of a millisecond pulsar emitting beams of radiation.  As the pulsar rotates, this beam is periodically pointed toward the Earth.  Credit: NASA

The Galactic Center is an exciting area.  In addition to the well-known central black hole and the thousands of stars, there is a curious excess of GeV gamma rays. The origin of these gamma rays is currently unknown.  This excess gets a fair amount of attention because it has roughly the same characteristics that we would expect from annihilating dark matter (see this past astrobite for more details).  One of the other competing explanations is a population of unresolved millisecond pulsars (MSPs), which would be expected to have roughly the same spectral shape as the GeV excess.  Millisecond pulsars are rotating neutron stars that emit a beam of radiation with a periods on a millisecond time scale.  They probably form when an old neutron star is spun up via accretion of matter onto it from a companion star.

Previous studies have looked at the millisecond pulsar explanation and concluded that if it were true, the inner portion of the Milky Way should have many more bright MSPs than the Fermi Gamma-Ray Space Telescope has already detected.  However, this conclusion may suffer from a systematic problem with the measurement of distances to many millisecond pulsars.  This is because the distances are often estimated using radio dispersion measurements, which in turn rely on models of how electrons are distributed in interstellar space.  If you propagate all the resulting uncertainties through, they can end up being fairly significant! If this potential mismeasurement turns out to be a problem, Fermi might not be sensitive to all of the MSPs responsible for the excess at the Galactic Center.

Hooper and Mohlabeng used a different method to describe the characteristics of the Milky Way MSP population which does not use distances based on the potentially problematic radio dispersion measurements.  Instead, they determined the luminosity function (or number of stars as a function of brightness) of the MSPs using the best fit to a model describing the MSP population in the Milky Way that they constructed and observations about gamma-ray emission that come from groups of stars orbiting the Milky Way’s center.  The parameters in the model were constrained using the few MSPs that have distances obtained via the motion of the stars over a long period of time, which is more accurate.  They also looked at three variables that effect the luminosity of a given MSP: the magnetic field, the period of rotation, and the gamma-ray efficiency. 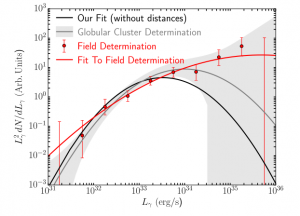 Figure 2: This figure shows how the number of millisecond pulsars changes as a function of luminosity. The black line is the luminosity function from this paper. The red line is from a previous study that uses the uncertain distance calculation. They disagree greatly about the number of very bright MSPs, but mostly agree at lower luminosities. (Source: the paper)

The authors used their resulting luminosity function and the probability that a given MSP would be detected by Fermi to estimate how many MSP candidates Fermi should have already detected, and came to the conclusion that Fermi still should have detected significantly more MSPs than it has.  However, they are not ruling out the millisecond pulsar theory completely.  It is quite possible that MSPs near the Galactic Center are less luminous than those found elsewhere, such as in the Galactic Plane or in globular clusters.  One theory has MSPs accumulating in the central stellar cluster/Galactic bulge as the result of the groups of stars getting too close to the central black hole.  This would lead to older MSPs in the Galactic center than elsewhere.  Since pulsars lose rotational kinetic energy with age, this would lead to lower luminosity MSPs.  More studies are needed to get to the bottom of this mystery.  Further constraints on the MSP population would give weight to the annihilating dark matter explanation for the GeV excess.