There is an excess of highly energetic radiation (gamma-rays) that comes from the direction of the Galatic Center and many ideas have been proposed to explain its origin. For a few years now, this excess emission has puzzled scientists and we followed this story in this astrobite and this one. One possibility is that dark matter particles consisting of weakly interacting particles (WIMPs), annihilate each other in this high density region, giving rise to gamma-rays.  In the paper we discuss today, the authors analyze data from the Fermi telescope to get new insights into the origin of this excess emission.

Fermi observes the sky in gamma-rays. It explores the physics behind gamma-ray bursts, how black holes power their jets and the nature of dark matter, among many other topics. Single gamma-ray photons hit the detector and when they do, they produce an electron-positron pair. Every time these charged particles produce ionization in the detector, they get counted as an “event”. Counting these “events” and knowing from which direction they came, the Large Area Telescope (LAT) on-board the Fermi satellite can produce high sensitivity, high resolution maps of gamma-ray sky.

The difference between this paper and previous studies with Fermi is that now, it is possible to decide whether to include or reject a given Fermi event based on the quality of the directional reconstruction. In other words, the authors are able to consider only the events for which they are certain that the photons came from near the Galactic Center. To model the observed emission in gamma-rays coming from near the Galactic Center, the authors need to take into account different mechanisms that produce gamma-ray radiation in our Galaxy. For example, they consider diffuse emission of gamma-rays in our Galaxy, an isotropic background due to extragalactic gamma-rays, point sources, emission from the Fermi bubbles, and a few other physical processes. The maps are described as a combination of all these components, including the dark matter annihilation contribution. As a result, the figure below shows a significant contribution from the best fit dark matter annihilation signal to the emission seen near the Galactic Center in a range of 1-3 GeV in the energy of the incident photons. The region shown is the “Inner Galaxy”, a region around the Galactic Center that excludes the Center itself . The model of the gamma-ray emission reproduces the data better when dark matter annihilation is included (as opposed to neglecting it). 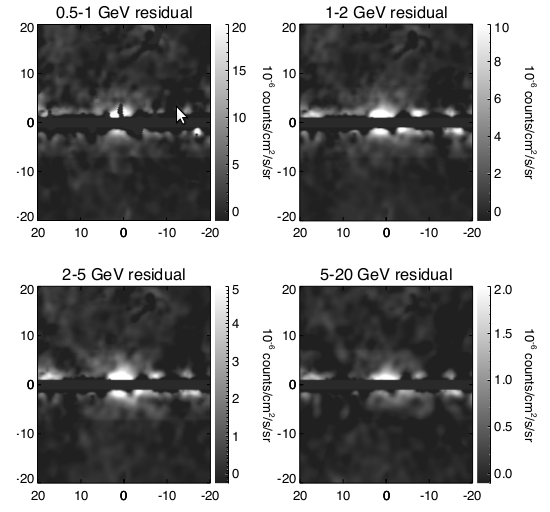 Spatial maps of the contribution of dark matter annihilation (grey-scale) to the best fit model. The bright lump near the center of each panel is in the direction of the Galactic Center. There are 4 maps for the emission seen in Fermi in 4 different energy bins for the incoming events. Figure 6 of Daylan et al. 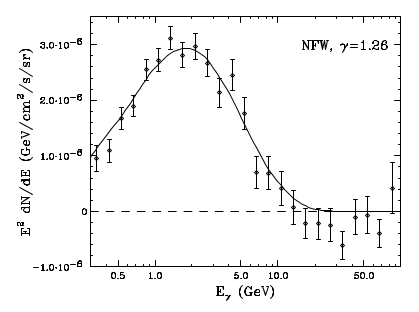 The measured energy spectrum of the photons that come from dark matter annihilation near the Galactic Center. The solid line is the expected spectrum from a dark matter particle of mass ~35.25 GeV annihilating into bottom quarks for comparison. Figure 5 of Daylan et al.

The results of this study suggest the annihilation of a dark matter particle with a mass between ~20-40 GeV produces gamma-rays near the Galactic Center. When these particles annihilate, the process preferentially creates quarks. They are also able to constrain the “cross-section” for annihilation, which is related to the rate at which two dark matter particles annihilate. The result they obtain is consistent with other measurements of how much dark matter there is in the Universe. Overall, the authors are confident that dark matter annihilation accounts for part of the gamma-ray emission measured by Fermi near the Galactic Center.

While this astrobite was being written, a related article by other authors appeared on astro-ph suggesting that a lower mass (~10 GeV) dark matter particle produces a better fit to the data when other physical processes are accounted for.