Title: A Multi-Wavelength Analysis of Annihilating Dark Matter as the Origin of the Gamma-Ray Emission from M31

Our galaxy is full of very high energy photons known as gamma-rays. They come from pulsars, and cosmic rays; they even reach us from supermassive black holes and energetic explosions in distant galaxies. Some of the most intriguing gamma-rays, however, are not the ones that traveled billions of years to reach us, but the mysterious leftover gamma-rays, once all of these other sources are accounted for, coming from the center of our own galaxy. 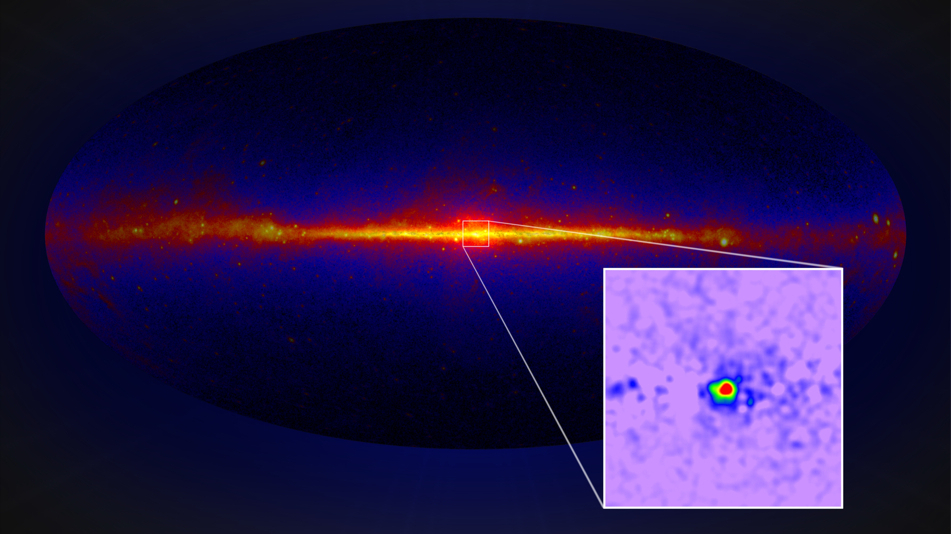 Figure 1. The background map shows the sky in gamma-rays. The bright central region is our galaxy, the Milky Way. Once all of the known gamma-ray sources are accounted for we are left with an excess signal at the galactic center, shown in the zoomed-in region. (Source: NASA, Fermi-LAT Collaboration.)

The origin of these gamma-rays has been hotly debated for years, but one of the most exciting possibilities is that they come from the annihilation of dark matter particles. If that is the case, then this would be a huge discovery – the first detection of dark matter! However, right now it is impossible to claim this discovery. The centers of galaxies are complex regions full of messy physics and it is very difficult to rule out less exotic origins.

A recent update may help to clear up this mystery – a similar signal was detected coming from the center of our sister galaxy, Andromeda. Today’s paper studies this newly discovered signal and the signal from our own galaxy to determine whether they could be produced by the annihilation of dark matter. 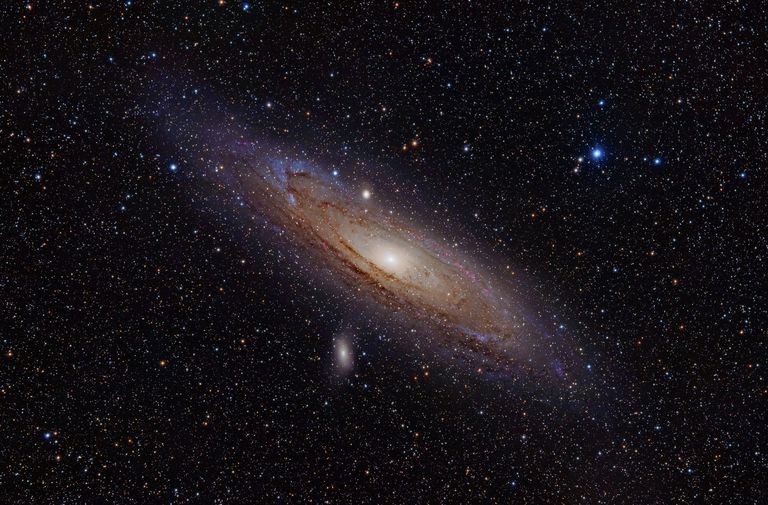 The authors take two approaches – first, they test whether the same type of dark matter particle could have produced the gamma-rays observed in the Milky Way and in Andromeda. Second, they see whether this same dark matter annihilation could also produce the radio signal coming from the inner regions of the Andromeda galaxy. 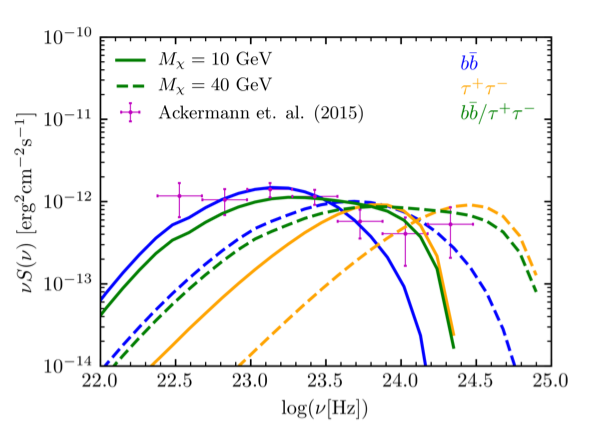 Figure 3. Predicted gamma-ray signals for different dark matter models, compared to the observed gamma-rays from Andromeda. The data are plotted in purple. The blue, green, and yellow curves show the quantity of gamma-rays expected at different energies for each model. Solid lines correspond to a lower mass dark matter model, dashed lines correspond to a higher mass model. The data more closely match the solid lines (lower mass). (Source: Figure 1 from the paper.)

The second approach taken in this paper is to compare the gamma-ray and radio observations of Andromeda. Dark matter annihilations produce a shower of particles, including gamma-rays as well as electrons and their anti-particle, positrons. When these charged particles travel through the magnetic fields of galaxies they emit radio synchrotron radiation. Therefore, if dark matter is annihilating at the center of the Andromeda galaxy, we should see both gamma-rays and radio synchrotron emission. This comparison is a bit more complicated, because the radio emission doesn’t only depend on the dark matter, but also on the magnetic field at the galactic center, and on how easily charged particles diffuse throughout the galaxy. Assuming typical values of the strength of the galactic magnetic field and the diffusion parameters, the authors find that the dark matter annihilation should be producing way more radio emission than we see coming from the central region of Andromeda (Figure 2). 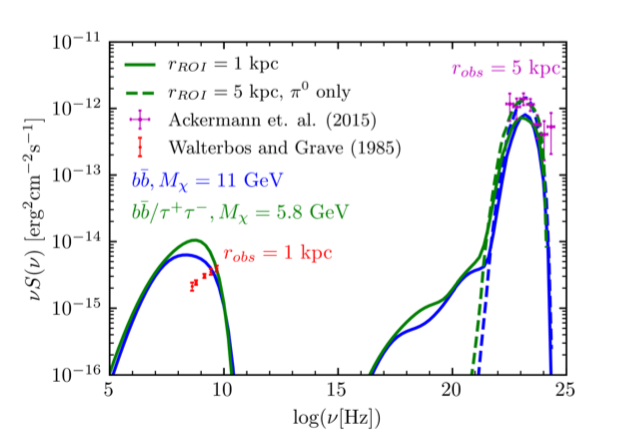 Figure 4. Comparison between gamma-ray emission and radio emission. The blue and green lines indicate gamma-ray and radio synchrotron emission for different dark matter models. When the models are adjusted to match the gamma-ray data (purple), they do not match the radio data (red). (Source: Figure 4 from the paper.)

These conflicts do complicate things a bit for the dark matter annihilation hypothesis, but they do not completely rule it out. It is important to remember how complex the centers of galaxies are. We certainly do not have a complete understanding of the magnetic fields and the behavior of charged particles at the center of Andromeda. Additionally, it is very difficult to predict the density of dark matter at the galactic center, which determines how frequently dark matter particles would meet and annihilate. This study, however, is a great example of the power of combining different types of observations. Continued study of galactic centers at all wavelengths will provide better constraints on the origin of these mysterious gamma-ray signals.