Title: Molecular Clouds as the Origin of the Fermi Gamma-Ray GeV-Excess

The center and disk of our Galaxy have received a lot of attention over the last few years. In addition to the well-known supermassive black hole and the recent report of a PeVatron in the area, there is an excess of gamma rays in the GeV energy range, seen with data collected from the Fermi Gamma-Ray Space Telescope.  Gamma rays are the most energetic electromagnetic radiation. We don’t know yet what is causing this gamma ray excess; numerous papers have been written theorizing that this is the gamma-ray signature from dark matter annihilating, or alternatively that it is being caused by millisecond pulsars (Astrobites coverage of the latter hypothesis).  Note that this excess consists of more gamma rays than we would expect just from the diffuse gamma-ray background.

Today’s paper explores a possible different origin of this excess – that the gamma rays are associated with interactions inside molecular clouds and they originate in the Galactic disk rather than the Galactic center (since we only observe the excess along our line-of-sight, it is non-trivial to determine the spatial origin).

Conventional analyses of the gamma-ray excess typically rely on using things such as propagation models (models of how particles move and interact through space) to see how diffuse (background) gamma-ray emissivity arises from interactions with gas and the interstellar radiation field. Unfortunately, the models typically used suffer from large systematic uncertainties near the Galactic center due to the complexity of the region. Today’s authors used a different technique: they created a different model for each physical process that can create gamma-rays (we’ll get to these processes in the next paragraph).  Some of these processes produce background gamma-ray emission, while others may be responsible for the bulk of the excess.  Taking their initial spectral templates, the authors divided the sky into 797 “cones” and used an iterative procedure, optimizing their initial assumptions until the best fit to the data was obtained. This simultaneous fitting, which includes all of the background gamma-ray emission, allowed them to avoid using poorly constrained models that have been used in the past. 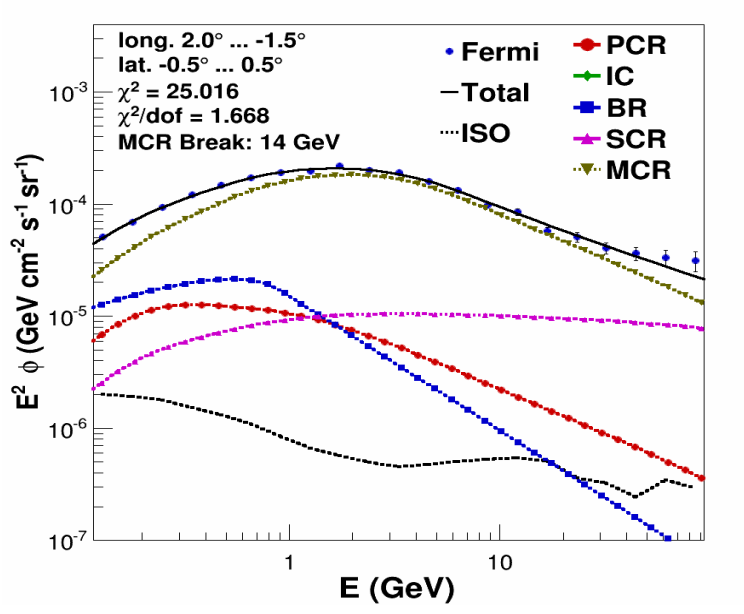 The fit to the Fermi diffuse data (blue data points) for the molecular cloud hypothesis, for the region towards the Central Molecular Zone. The colored lines are the different components of the fit: PCR (propagated cosmic rays), IC (Inverse compton), BR (Bremsstrahlung), SCR (unresolved sources), and MCR (molecular clouds).  The black line is all these processes added together and fits the data well.  Source: Figure 7a from the paper.

Using this technique, they created templates for five background processes (gamma rays produced from neutral pion decay, Bremsstrahlung emission, inverse Compton scattering, the cosmic rays in unresolved sources, and isotropic emission) and then added a template for gamma rays coming from either molecular clouds or dark matter.  They found that if one only looks at a small region around the Galactic center and makes some cuts on the energy range (some of the papers previously exploring dark matter in the region had restricted the energy range), the data can explain both hypotheses.  However, if one uses the entire gamma-ray sky and all energies, the molecular cloud hypothesis explains the data better.  They show some evidence.  For example, the GeV excess has a morphology similar to CO-maps, which is used as a tracer of molecular clouds.  They also show that it does not follow an NFW profile, one of the most commonly assumed density profiles when performing dark matter analysis.

What may be the most compelling evidence comes from the Central Molecular Zone (CMZ).  The authors describe this as a  “dense molecular cloud conglomerate” that surrounds the center of our Galaxy.  If one looks at this rectangular region, the GeV excess is visible in the raw data without any analysis.  Dark matter annihilation signals would have a spherical morphology, not rectangular.  The origin of this excess is far from settled, and this paper provides a convincing alternative explanation.