Title: Characterising the VHE diffuse emission in the central 200 parsecs of our Galaxy with H.E.S.S

Particle astrophysics is a rapidly growing field that draws from both physics and astronomy, and one of the big open questions in the field is how exactly cosmic rays (composed of astrophysical charged particles such as protons) are accelerated, along with where they originate from.  We know most Galactic cosmic rays are associated with supernova remnants, but those can’t accelerate cosmic rays up to the highest energies.  Many theories point to activity in and around the Galactic Center as an important region in solving this mystery.

Since cosmic rays are charged particles, they bend in magnetic fields during the journey to Earth and therefore do not point back to their source.  One of the ways to get around this conundrum is to study gamma rays (high-energy photons) instead.  They are associated with cosmic ray sites, but being neutral, it is possible to trace their path back to their origin.  Gamma rays are produced at these sites via processes such as inverse Compton scattering and synchrotron radiation.

HESS is a gamma-ray telescope located in Namibia that has undertaken extensive observations of the Galactic Center region over a time scale of more than a decade.  They have published two high-profile papers on this topic.  The first one, published in 2006, detailed the discovery of very high-energy diffuse gamma-ray emission in the region that pointed to a cosmic ray density nine times than the cosmic ray density at Earth.  The gamma rays were thought to be related to an injection of cosmic rays by an unknown source located near the Galactic Center.

A second paper, published last year, changed this picture drastically.  A more in-depth study of the gamma rays in the region led to the observation of a gradient in the cosmic ray density profile.  The profile was consistent with particles being injected by a source located at the Galactic Center, instead of merely near it.  This marked the first observation of a Galactic PeVatron, or source accelerating charged particles to greater than 1 PeV (you can see Astrobite’s coverage of this paper here).  Sgr A*, the black hole at the center of the galaxy, was hypothesized to be the source. 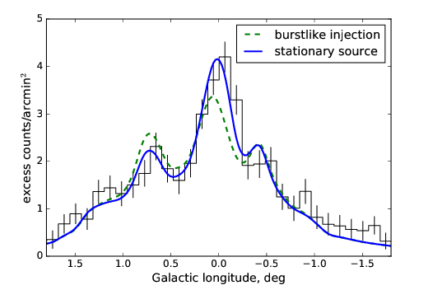 Figure 1: The longitudinal profile of gamma ray emission from the Galactic Centre ridge. The dotted green line is the model based on their 2006 paper, which the blue is their more recent model. Note that the 2006 model fails to explain the peak. (Source: Figure 2 from the paper)

Today’s paper builds upon the two papers mentioned above to take an even more in-depth view at the region.  They looked at all the components that contribute to the gamma-ray emission in the Galactic Center ridge region and studied their morphologies.  One difficulty in doing a study of this type is that a physically motivated model relies partially on gas distributions in the region, but no reliable 3D gas models exist.  Instead, they performed an iterative maximum likelihood analysis to extract the components.  That is, they added the different components that contribute to the emission (such as point sources, the component related to the gas, etc.) one by one, and looked at the residuals until the fit converged (see Figure 1). 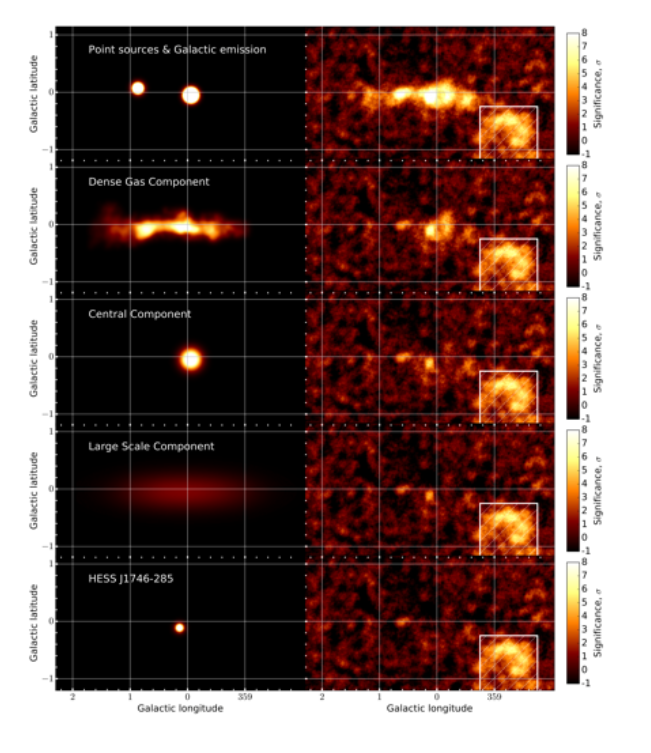 Figure 2: An illustration of how the iterative fitting process works. Each panel shows a component that is added to the model, and the right is the residual map, or what is left in the data after the model is subtracted. (Source: Figure 3 from the paper)

The authors have a few main takeaways from this study.  They found that the gamma-ray emission extended out further than reported in their last paper, meaning that PeV cosmic rays are also present over a larger area than previously reported.  Some of this emission is not correlated with molecular gas tracers, meaning that it is probably from cosmic ray interactions with diffuse gas, although some of it could be coming from unresolved sources.  They also detected a component centered at Sgr A*, confirming their result from their 2016 paper.  Lastly, they detected a new point-like gamma ray source in the region, and showed that it is likely associated with a pulsar wind nebula candidate previously detected in x-rays.

While this is a step forward in our understanding of this complicated region, there is still more to be done.  The technique used does not allow for determining the energy spectra of the different large scale components.  The authors end the paper by mentioning that the Cherenkov Telescope Array, a planned future experiment, will have better resolution and will likely be able to achieve this.