The birth of a new field

Today’s paper is historical in nature rather than a current summary – it describes the 1989 paper that essentially birthed the field of ground-based gamma-ray astrophysics by making the first > 5 sigma detection of a TeV gamma-ray source!

Gamma rays lie on the highest-frequency end of the electromagnetic spectrum and have been observed spanning a few orders of magnitude in energy, starting from a few hundred keV, going through the MeV range, the GeV range, and beyond. The most energetic gamma rays observed to date have been in the TeV range, which is roughly the same energy the proton collisions at the Large Hadron Collider take place at.  TeVCat currently lists 198 known TeV gamma-ray sources. They are associated with some of the most energetic and violent things in our universe, including supernova explosions and active galactic nuclei.

TeV gamma-ray sources are of particular interest because of their ability to probe phenomena associated with some of the big unsolved problems in astroparticle physics – they are associated with the acceleration sites of charged cosmic rays, but are somewhat easier to study since gamma rays are electrically neutral and don’t curve in magnetic fields on their way to us. This means that they point directly back to their sources. The origins and acceleration sites of charged cosmic rays are still open questions – we know a large portion of the galactic cosmic rays originate in supernova explosions, but don’t know a whole lot else. They can also be used for other science; for example, many current gamma-ray observatories are involved in finding electromagnetic counterparts to gravitational waves.

The Whipple 10 m telescope used to make the observations described in this Astrobite. (Source: Michael Richmond, used under a Creative Commons license)

When a gamma ray hits the Earth’s atmosphere, it interacts with the air molecules and creates what is known as an extensive air shower.  This means that it is not possible to directly observe the gamma ray from the Earth and its indirect products must be studied instead.  The extensive air shower consists of many electrons and positrons, some of which are traveling faster than the phase velocity of light in air.  This leads to the emission of a type of radiation known as Cherenkov radiation. Detecting this radiation is one of the ways that we can indirectly detect gamma rays on the Earth, and many currently running experiments (such as VERITAS, MAGIC, and HESS) have used this technique to great success.

A few decades ago, the prospects for detecting gamma rays from the Earth was not so rosy. Techniques to separate the showers caused by gamma rays from those caused by the very large background caused by hadrons were still in their infancy. Experiments were publishing only weak detections (~3 sigma) and contradictory results.  Statistical tests that we use today to check the validity of results were not widely used yet.  An overview of the field from 1988 stresses that it is likely that some of the “sources” in their list will likely be removed as techniques are refined. (For more information about this time period, see section 2.2 of this history of gamma-ray astronomy, written in 2012.) 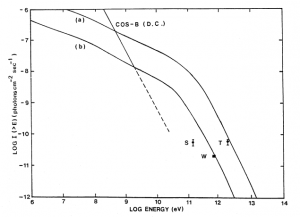 The spectrum of the Crab Nebula. The “W” is the measurement from this paper, the others are results from earlier experiments, which were less significant detections.  The lines are the predicted spectrum for two different values of the magnetic field.

In 1989, everything changed for the field of ground-based gamma-ray astrophysics.  That was the year that scientists published a 9 sigma detection of TeV gamma rays from the Crab Nebula, the first unambiguous detection of gamma rays (from any source) at TeV energies.  The data was collected at the Whipple Observatory in Arizona, which had a 10 m reflector outfitted with a 37 pixel camera to detect the Cherenkov radiation described in the preceding section.  The 37 phototubes were arranged in a hexagonal pattern and were capable of tracking sources across the sky.

The data was collected between December 1986 and February 1988 using what is known as the “on/off” technique, where the source (in this case the Crab Nebula) is followed for a certain period of time, and then observations are taken for an equal amount of time off-source.  This allows for an ample background sample to compare the source area to.

It was the improved gamma/background discrimination that led to the unambiguous detection.  After each observation, the data was calibrated, the observed showers parameterized, and then candidate gamma rays were selected.  Monte Carlo simulations were used to predict how the camera would respond to gamma-ray initiated showers and hadron-initiated background showers.  When the analysis was finished, the Crab Nebula was seen with a significance of 9 sigma above an energy threshold of 0.7 TeV.  No variability was observed over the months or years the data was taken over, and it was established that the emission was likely coming from the hard Compton synchrotron spectrum in the Nebula.

The authors close the paper by noting that observing a steady source such as the Crab Nebula is important for the field of TeV gamma ray astronomy, since such a source can be used as a standard candle in calibrating new detectors.  In fact, this is still true today.  Nearly every gamma-ray experiment starts off their life by publishing a paper with their observations of the Crab Nebula, as it is still the most significant source in the gamma ray sky!