The History
How completely has the study of astronomy changed in 100 years? For today’s Astrophysical Classic let’s find out by looking back to 1916 and the journal “Popular Astronomy.” In this issue is a letter, written in the first person (as was common), explaining some recent observations obtained with the six-inch Bruce lens at Yerkes Observatory. Mr. Barnard (not Doctor! although a professor of astronomy, his only degree was an honorary one) writes that he noticed a star on one of his photographic plates taken in May 1916 that did not appear on a plate from 1894. Similarly, he also noticed a star 4 arcminutes (about 1/10 the moon’s diameter) away, which only appeared in the 1894 image. Curious! By analyzing previously obtained images of the region, he found additional “variable” stars that only appeared in one frame each—and they all appeared along a line! 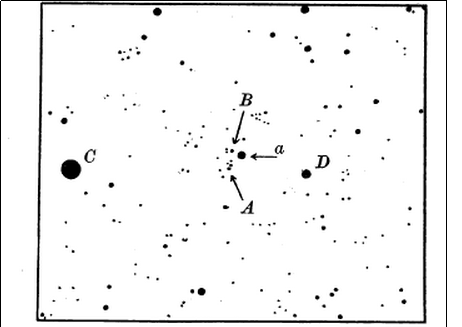 Image from Barnard’s paper, showing the movement of the newly discovered star in time, between point A (1894) and B (1916). a, C, and D correspond to known stars in the field.

You can probably guess Barnard’s conclusion: all these stars are actually the same star, with an observed proper motion causing it to move across the sky. Even back in 1916, it was known that stars have some velocity relative to each other in space, which we observe as a radial velocity (motion towards or away from us) and a proper motion (motion across the sky). So why is this paper a classic? Well, Barnard estimated a proper motion of 10 arcseconds per year (without any listed error bars). This smashed the previous proper motion record of 8.7 arcseconds per year. In fact, this star is still the record holder, with a refined measurement of 10.37 arcseconds per year. Moreover, Barnard noted that a spectroscopic analysis makes this star an M-dwarf, and from the measured parallax estimated a distance to the star of 16.3 light years (yes, the paper gives results in light years). Again, there are no uncertainties listed. “Barnard’s Star,” as it came to be known, was later found to be at a distance of only 1.8 parsec (6.0 light years) making it the second closest stellar system to our own (after the Alpha Centauri system) and the closest system in the northern hemisphere.

Why We Care
Understanding stars is immensely important to understanding all of astronomy. If you are studying galaxies, you are studying the integrated light of millions or billions of stars, so you better understand the stars in the galaxies. If you’re studying the interstellar medium, it’s important to understand how it’s affected by the surrounding luminous stars. Those that study extrasolar planets infer their properties from observations of the planet host stars. But as fundamental as stars are to all of astronomy, we don’t really know what’s happening inside them. To help, we rely on theoretical stellar models, which use physics to help convert observable parameters (brightness, color, temperature) into physical parameters (mass, radius, age, metal content).

For the models to correspond to reality, we require “benchmark” objects with known physical properties. The Sun is one of these: a star with the same brightness and temperature of the Sun should definitely correspond to an object with a mass and radius equal to our star. Indeed, stellar models tend to agree pretty well in this regime. For other spectral types, eclipsing binary stars are often used to calibrate models: the eclipses provide measurements of the stellar radii, while follow-up radial velocity observations can provide stellar masses. However, the further one retreats from solar-type stars, the less the models agree. Moreover, dwarf stars not in binaries are expected to be fundamentally different than their binary brethren! Since the vast majority of eclipsing binaries have short orbital periods, we expect the stars to be tidally locked and interacting magnetically. Theoretically, this should inflate the radii of these small stars. Therefore, not only do we not have much data to calibrate our models, but we think our data may be fundamentally incorrect!

Barnard’s Star to the Rescue!
To solve this problem, we really need “field” (not binary) stars for which we can measure fundamental parameters. Luckily, since Barnard’s star is so close, even though it has a very small radius, it has a very large angular diameter, meaning we can actually measure the size of its surface with an interferometer. In 2001, astronomers used the Palomar Testbed Interferometer to measure Barnard’s star’s radius as 0.201±0.008 solar radii. In 2009, the Very Large Telescope Interferometer has improved this measurement to 0.1960\pm;0.0008 solar radii, making it the most precise direct radius measurement of a field M-dwarf. With other careful measurements of its luminosity and temperature, Barnard’s star is far and away the best-characterized star of its spectral type. New stellar atmospheric models must take this precisely measured point into account, allowing the very low-mass end of the stellar spectrum to be tightly constrained for the first time. Since there are more stars of the same spectral type as Barnard’s (M4) than any other spectral type, this is an important type of star to understand!

Barnard’s star doesn’t just teach us about stars as a population; it can also teach us about individual systems. Recently, the Kepler telescope detected signatures of small transiting exoplanets in one of its target stars. However, the Kepler team was not sure how small the star was, meaning they were not sure how small the planets were! Fortunately, some astute astronomers collected a spectrum of this system (shown below), and noticed that its spectrum was nearly identical to that of Barnard’s star! They were then able to extrapolate the properties of this new star system from the properties of Barnard’s star, and found the star (and therefore the planets) were much smaller than the Kepler team’s best guess. In fact, the smallest planet was the size of Mars, and at the time was the smallest exoplanet known. When the authors published their paper, they paid tribute to tiny Barnard’s star in the title of their article. Their paper was titled “A Small Star with Large Proper Motion and Three Small Planets,” a play on Barnard’s original title.

The spectrum of Barnard’s star is nearly identical to that of “Kepler Object of Interest 961,” enabling researchers to characterize the star by mapping Barnard’s Star’s known stellar properties to the spectrum of this star.

Barnard passed away only seven years after the discovery of his eponymous star, and his discovery paper wouldn’t even be cited once until 1975. However, in the present era of precise stellar characterization, Barnard’s star will be a key instrument in helping us characterize the low-mass end of the stellar spectrum, allowing us to understand diminutive stars both in and outside our galaxy like never before.

A Stellar Review: Re-Analyzing the Kepler Stellar Radii with Gaia