Dark matter has been observed only “indirectly”

Most readers of this blog have likely heard of dark matter before; you may even take it for granted that it exists. A huge body of astronomical research exists offering conclusive evidence for some kind of mass in the universe which a) exerts gravitational force on regular matter, b) doesn’t emit light,  and c) seems to be 5 times more abundant than regular matter. Evidence for this extra mass comes from gravitational effects, including

These observations indicate that there is much more mass in the universe than we can see with light. 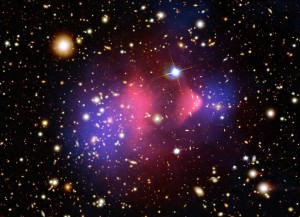 Fig. 1 – An image of the Bullet Cluster, which is believed to be made of two smaller galaxy clusters which are in the process of merging. This image shows galaxies, hot cluster gas (red), and total mass from gravitational lensing (purple). What’s most interesting is that the centroids of the total mass (representing the dark matter) is offset from the gas. When the clusters collided, the gas’ viscosity kept it stuck together, while the dark matter continued through because it only interacts via gravity. Image C/O NASA/CXC/STScI

But these gravitational clues are only “indirect evidence” for dark matter’s existence. It is like seeing a dancing marionette puppet (the gravitational effects), and inferring there must be strings (dark matter) to make it move.

Some models (such as Modified Newtonian Dynamics) try to explain these gravitational effects through a subtle change to General Relativity. These changes could make gravity stronger in certain places without requiring more mass. This explanation is like saying the puppet is held up by magnets: it could explain the puppet’s movement just as well as strings could. To prove dark matter really exists, we must actually see the strings, not just the puppet. Today’s paper offers some of the best evidence yet!

Where to look for “direct” evidence of dark matter

In order to conclusively prove the existence of dark matter, astronomers and physicists alike want so-called “direct evidence”: a unique measurement of a new particle, using some property other than gravity. Astrobites has previously covered many examples of ways to directly detect dark matter (assuming the particles are something like a WIMP). The most direct detection method is with particle detectors buried underground. Another direct method is to detect gamma-rays or radio waves emitted when two dark matter particles collide (Fig. 2). 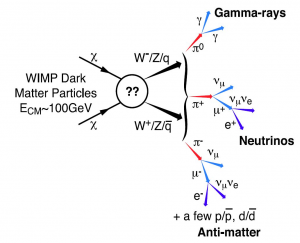 Fig. 2 – Dark matter particles probably don’t produce photons on their own. However, if they interact via the weak nuclear force, they could create a particle-antiparticle pair when they collide. These byproducts can produce gamma-rays, neutrinos, etc., resulting in observable traces of dark matter. From Baltz et al. 2008.

Because dark matter particles don’t interact with light, they shouldn’t produce photons on their own when they collide. However, some models predict they could create a particle-antiparticle pair, like a tauon and an antitauon. These byproducts of the dark matter collision can then collide again, resulting in gamma-rays. They could also spiral around galactic magnetic fields, producing radio waves. This method is less direct than actually seeing a collision in a particle detector. But, it would be much more conclusive evidence for dark matter than the gravitational effects alone.

The best place to look for the emission from colliding dark matter particles is where dark matter is thought to be the most dense: the centers of galaxies and clusters. Observers claim to be very close to detecting gamma-rays coming from dark matter at the center of the Milky Way (see this Astrobite). But while large galaxies like the Milky Way should have a lot of dark matter, they also have a lot of background gamma-ray sources! Pulsars, supernova remnants, and our supermassive black hole all emit gamma rays like crazy, and are all clustered right near the center of the Milky Way. So even a strong dark matter signal could be tough to distinguish from the regular gamma-ray emission from the galaxy.

A better place to look for dark matter signatures is in dwarf galaxies. They may have less dark matter overall, but also have the benefits that:

Therefore, dwarf galaxies are thought to offer one of the best ways of detecting dark matter, if it actually emits gamma-rays at all.

A detection of gamma-rays from a dwarf galaxy

Previous attempts to observe gamma-rays coming from dwarf galaxies have been marginally unsuccessful (see this Astrobite). The authors of today’s paper analyzed archival measurements from the Fermi-LAT gamma-ray space telescope, looking for emission from the dwarf galaxy Reticulum 2. They estimate the expected background in two ways: one from the Fermi group’s model of diffuse emission in that region, and one from actual measurements, averaged in the regions around Reticulum 2. 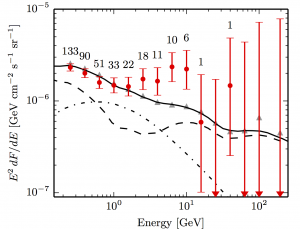 Fig. 3 – The gamma-ray spectrum around Reticulum 2 is shown in red points. Two different background estimates are shown as the solid black line and grey triangles. The excess of emission around 2-10 GeV could be the first signs of direct evidence for dark matter. Fig. 1 from Geringer-Sameth et. al 2015.

In an exciting breakthrough, the authors find more gamma-ray flux than expected from either background model! This emission is observed to come from gamma-rays between 2–10 GeV (Fig. 3). If this emission comes from dark matter collisions — rather than some other source that hasn’t been identified yet — this energy range could help constrain the mass of the dark matter particles themselves.

The authors claim this to be a significant detection of dark matter. Values as high as 4σ are tossed around, suggesting less than a one-in-ten-thousand chance that this is just noise. This exciting result has been getting lots of press attention over the past week (such as in this Brown University press release, this Discovery article, and even the New York Times). However, these significance levels are dependent on the models chosen for both background emission and for the dark matter particle physics.

In this Astrobiter’s opinion, the most that can be confirmed is the detection of an excess of gamma-rays from Reticulum 2. The authors themselves stress that there is a lot more work ahead to confirm this emission indeed comes from dark matter. More observations of this galaxy in gamma-rays are needed, to improve the quality of the signal. The Fermi group is soon releasing a new data reduction algorithm, which will improve the resolution of the observations already completed. Perhaps even more importantly will be follow-up in other bands, like in optical or X-rays. These can identify whether another source which could produce gamma-rays (like a pulsar or a young, massive star) is nearby to this galaxy. Dark matter has not yet been conclusively detected, but these observations indicate we might be very close. It is unquestionable that this object (and other dwarf galaxies like it) will be getting a lot of attention in the years to come.