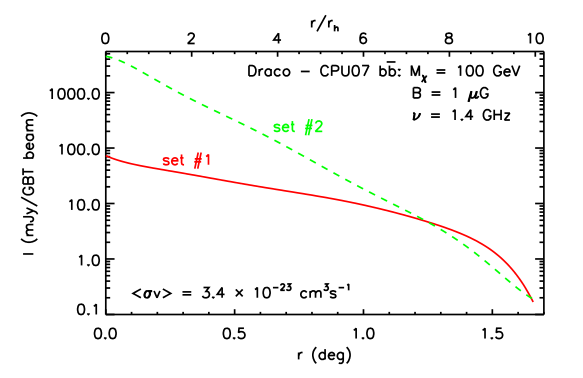 Figure 1: Two predicted profiles of the 1.4 GHz surface brightness as a function of distance from the center of the Draco galaxy. These models use an annihilation cross section which is strongly ruled out.

As we’ve mentioned on Astrobites before, the primary candidate for dark matter, the substance that makes up nearly 25% of the mass in the universe, is weakly interacting massive particles (WIMPs). These hypothetical particles have high masses but do not interact with the electromagnetic force – only gravity and the weak force (hence “weakly-interacting”). Many searches for WIMPs have focused on direct detection (for example, see the Cryogenic Dark Matter Search), but none have yet seen an irrefutable signal. Much recent work has been done on the possibility of indirect detection, such as trying to observe a potential WIMP annihilation. Many current models of WIMP interactions predict that two dark matter particles could collide and produce gamma rays. This could explain a 130 MeV gamma ray line observed at the Galactic center by the Fermi Gamma Ray space telescope.

Another proposed WIMP annihilation mechanism produces electrons and positrons (the electron’s antiparticle). We can look for these electrons and positrons around galaxies by observing the radio synchrotron emission that occurs when they spiral in the galactic magnetic field, or by the bremsstrahlung emission from their interactions with other ions. If this WIMP annihilation is actually happening, we would expect to see extended radio emission correlated with areas that are overdense with dark matter. 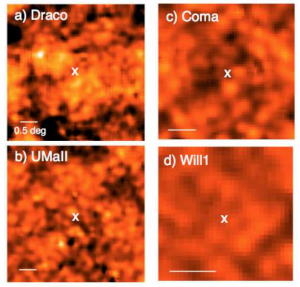 Figure 2: The 4 dSphs with discrete sources subtracted. The center of stellar light is marked with the cross.

The authors chose to look for continuum radio emission from annihilation-induced synchrotron in dwarf spheroidal galaxies (dSphs). They chose this type of galaxy for several reasons: such galaxies are strongly dominated by dark matter, and strong upper limits on their star formation rates means that there should be little astrophysical gamma ray emission to contribute background noise. No gamma ray observations have yet reported a detection in these galaxies (see this Astrobite for Fermi observations of dSphs). If the proposed dark matter annihilation model were accurate, we would expect to see a smoothly distributed radio synchrotron halo, coming from annihilation-produced electrons and positrons, extending from the center of the galaxy on the order of a degree on the sky.  Figure 1 shows the predicted radial surface profiles (brightness on the sky as a function of distance from the center of the galaxy).

The authors observed four dSphs (Draco, UMaII, Coma, and Will1) with the Green Bank Telescope (GBT) at 1.4 GHz, shown after source subtraction in Figure 2. In order to reach the sensitivity required to see a dark matter annihilation signal, discrete background sources which dominate the maps were removed using the Northern VLA Sky Survey. Finally, the authors found radial profiles of the continuum emission (Figure 3) by averaging the brightness in radial bins relative to the center of the galaxy (as determined by the center of stellar light).

These observations probe an important characteristic of dark matter: its annihilation cross section, or probability of interacting. A high cross section should lead to a strong annihilation signature. The plots in Figure 3 show each galaxy’s radial emission profile. If there were no WIMP annihilation in these galaxies, the purple line on each plot would be consistent with zero. The galaxies UMaII and Will1 do not show significant emission, so by assuming the emission is zero, the error bars can provide an upper limit on the cross section:

is less than 10-25 cm3/s.  This limit is comparable to the limit from gamma ray observations of the same galaxies. 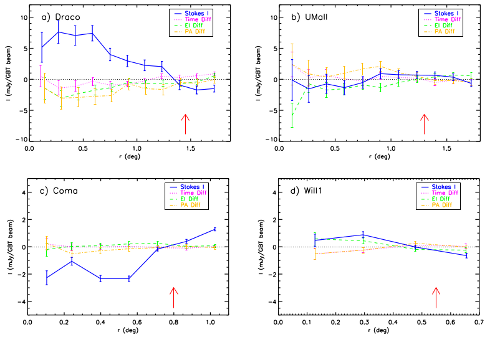 Figure 3: The measured radial profiles of the 4 dSphs (blue line).

The Draco and Coma fields do show significant emission, but the authors argue that these are due to foreground synchrotron emission coming from our own Galaxy, not the dSphs.  This is because the shape of the emission around Draco is asymmetric and does not trace the galaxy’s density distribution. If the emission came from WIMP annihilation, it should follow the density distribution of the galaxy, since the mass of the dSph is dominated by dark matter. Also, if the emission observed were really from WIMP annihilation, the implied cross sections from both galaxies would exceed the limits set by Fermi gamma ray observations.

Even though these observations of dSphs did not yield a detection of the products of WIMP annihilation, the method is promising. Limits on cross sections and annihilation signatures can be improved by mapping more dSphs, taking data further away from the galaxy center, and considering more sophisticated models of dark matter.