Moving into space is necessary to detect lower frequency gravitational waves.  The authors note that staying on Earth is not feasible for two main reasons: First, there is a large acceleration of a ground-based laboratory relative to the local inertial frame (An inertial frame is a frame of reference where Newton’s Laws are observed.  Click here for an explanation of why the Earth’s surface is not quite an inertial frame). Additionally, there is terrestrial gravitational noise at these frequencies coming from seismic events, the atmosphere, and massive bodies (such as a truck) passing by (source). 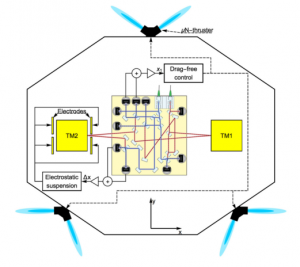 Figure 2 from the paper: Schematic of the LISA Pathfinder spacecraft. TM1 and TM2 are the test masses. Δx is the quantity that needs to be measured in order to calculate Δg, while x1 is the distance between the first test mass and the space craft. Both of these quantities are measured by interferometers. The control loop keeps test mass 2 a fixed distance from test mass 1 and centered in its electrode housing, which serves as an electrostatic shield. Not all electrodes are shown. More information on the forces present can be found in the text of the paper.

Like LIGO, a space-based observatory will operate using the principles of interferometry, with test masses being enclosed in separate spacecraft separated by a few million kilometers (this means that the light from the laser will have to travel a very long distance!).  LISA Pathfinder is dramatically scaled down from what the full observatory will look like.  Most notably, the two gold-platinum alloy test masses are contained within a single spacecraft.  Due to the extremely reduced length of the interferometer arms, LISA Pathfinder is insensitive to gravitational waves.  However, it is sensitive to the differential acceleration between the two test masses.  This is important because the plans for a space-based gravitational wave observatory call for free-falling test masses.

LISA Pathfinder was launched in December 2015 but did not begin science operations until March 1, 2016.  This is because the test was done at Lagrange point L1, where the Sun-Earth gravitational forces equal the centrifugal force felt by the spacecraft, creating an equilibrium point.  Near-perfect free fall is possible here. 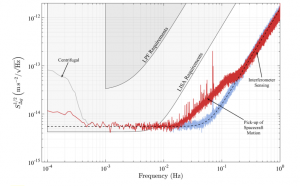 Figure 1 from the paper: The main result. The noise goes with the square root of the power spectral density (y-axis). Gray shows the data, red shows the time series after correcting for the centrifugal force, and light blue shows after the correction for the spacecraft motion. Note that this is much lower than the requirement for the LISA Pathfinder (LPF) mission, and for some frequencies is even below the requirement for a full gravitational space-based observatory (labeled LISA here)

The main observable from this paper is the measurement of Δg, the relative acceleration.  This was measured by measuring Δx, the differential displacement of the two test masses, taking the second derivative (recall that the second time derivative of displacement is acceleration), and adding some corrections for the spacecraft motion, centrifugal force, etc.  (See equation 1 in the paper for a more in-depth explanation).  Excitingly, the noise associated with this relative acceleration is lower than the mission requirement for LISA Pathfinder by a factor of 5.  Even more amazingly, this quantity is below the full eLISA requirement at frequencies higher than 10 mHz, and is within a factor 1.25 of the LISA requirement for all frequencies.  The noise can be explained by Brownian noise from the viscous damping caused by gas surrounding the test masses.  Therefore, this proof-of-concept is a success and a space-based gravitational wave observatory is viable!