As a frequent reader of Astrobite, chances are high that you are a passionate physicist. Then you might also agree with nobel price winner Rutherford, who said: “All of science is either physics or stamp collecting.” Well, I hope you like stamps. Today’s Astrobite deals with chemistry; especially with the production of complex organic molecules – here’s the savior for all of you ASTROwhatsoever – in outflows around low-mass stars. 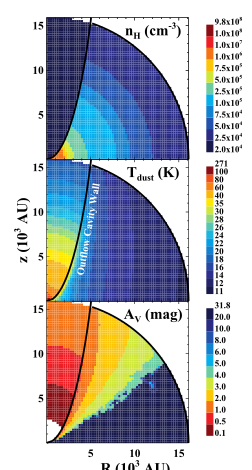 Figure 1: Physical structure of the two-dimensional model around the protostar (located at the origin). Top: Density of the gas; Middle: Temperature of the dust; Bottom: Visual extinction. The three plots clearly illustrate the outflows and envelope as well as the cavity wall in between.

To put it a little bit more into perspective here. A star forms due to gravitational collapse. While the star accretes, it ejects part of its mass in the form of bipolar outflows back into the lower density environment. Astronomers use the term ‘envelope’ when talking about the surrounding within a distance to the protostar of about 10 000 AU. In the last few years astronomers have observed many stars together with their envelope and they found signs of complex organic molecules (COMs). These COMs are particularly interesting for astrobiologists because they are considered the building blocks of life. However, we don’t know where and how they are formed. This is the point, where chemistry, modeling and the authors of today’s paper come into play. The authors use a static two-dimensional model. Static means that the physical conditions such as density or temperature do not change in time; two-dimensional means that the authors consider a slice as an approximation for the more complicated (and computationally more expensive) spherical like structure. Apart from that the authors implement a cavity between the outflow and the rest of the envelope. You can see an illustration of their physical model in Figure 1 (also Figure 1 in the article). For the chemistry, the authors take into account thousands of chemical reactions to model the distribution of COMs in the envelope of a protostar comparable to the young Sun. Additionally, the authors account for the fact that young stars undergo episodes of high luminosity (‘luminosity bursts’) by varying the luminosity of the star in their model.

Production and distribution of complex organics around protostar

The last aspect is critical for the production of COMs. In order to form complex molecules, you need to have molecules with at least one unpaired valence electron, so called free radicals. But how to produce them? Free radicals can be produced by breaking up the simpler molecules that are in the solid phase by a process called photodissociation. However, photodissociation requires energetic photons and these photons have to come from the star itself. It turns out that in order to produce a significant amount of COMs, one needs a fair amount of free radicals and thus an – at least temporally – high energy source, such as it could be provided by young stars undergoing ‘luminosity bursts‘.

Assuming that such periods of high luminosity exist, the authors find that there are three different zones around the young star and its bipolar outflow (see Figure 2, which is Figure 10 in the paper): 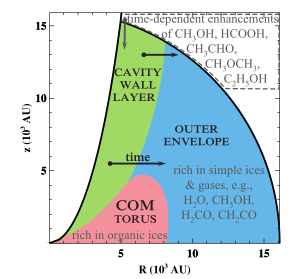 Figure 2: Three distinct zones for different types of molecules around the protostar with its outflow. Solid complex molecules are most abundant in the COM torus (red), while simple molecules are highly predominant in the outer envelope (blue). Note that the envelope can be enriched through infall of molecules in the cavity wall layer (green).

‘Fresh’ molecules can fall from larger distances into the cavity wall and potentially enrich the envelope in COMs. In general, the authors stress that COM abundance is not unique for the solids and the gas phases. For instance; ices in the torus are rich in COMs, while the gas is very poor in COM. Another interesting result of their work is that different COMs in the torus have varying peak abundances. The authors conclude that this hints at different lifetimes of the molecules. This aspect is particularly interesting for astronomers since COMs could be a potential tracer of age for young stars.

Sort of a disclaimer

If you’re thinking: ‘Great! That’s how it looks like around a young star.’, I warn you. The authors do a great job in combining the complexity of chemical reactions and the physics of a young star, but as you probably know from your own life, it is impossible to account for everything. Considering a dynamical three-dimensional surrounding around the evolving protostar might affect parts of the results significantly. Nevertheless, this work provides new helpful constraints on the formation of ‘the building blocks of life’ by respecting the chemistry involved during star formation. By the way, do you remember the Rutherford statement from above? He won his Nobel prize in chemistry.