Title: Abundant molecular oxygen in the coma of comet 67P/Churymov-Gerasimenko

Wrap up of the history of the mission

Recently, a couple of space missions have triggered a lot of attention in the media. Ben has given a nice overview of several important missions in the near future. Among them you can find “Rosetta“, the mission to the comet 67P/Churyumov-Gerasimenko, (or “Chury” in short). Did you know that Chury was actually not the intended target of the mission? The original plan was to fly to comet 46P/Wirtanen in January 2003, but the launch had to be cancelled due to failures at the Ariane 5 rocket. That was the chance of Chury to jump in as an alternative target for the launch of Rosetta and the lander “philae” in March 2004.

About ten years later in August 2014, the lander eventually sent a signal to Earth causing a feeling of relief and joy for the researchers affiliated to the program and besides that a huge “Wow!” in the public (watch the reactions after landing here). Although the lander is (probably) dead, the mission nevertheless has been a huge success. Here’s a brief overview of some of Rosetta’s most important results. 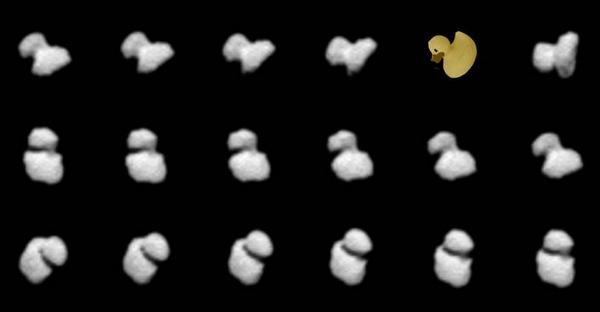 Figure 1: Image tweeted by the Philae Lander on July, 18, 2014 with the tweet: “I was told our target comet looked like a ball or a potato – nobody said anything about a rubber duck… quack!”

Summer on a rubber duck

With a little bit of fantasy, Chury has the shape of a rubber duck (as tweeted by ESA, see figure 1). You may think: “Funny, but so what?” Actually, it strongly indicates that Chury consists of two separate fluffy bodies that collided with at most 10 m/s to form its current shape. The shape has important consequences. Due to the non-symmetrical shape, the comet has a very complicated gravitational field, which made it challenging to land on Chury. Moreover, unlike Earth, the length and characteristics of the seasons are different on the southern and northern hemisphere. While summer lasts for about 3 Earth years on the northern hemisphere with temperatures below 80 K (remember that typical temperatures on Earth are 59 °F = 15 °C = 288 K), it only lasts for a few months on the southern hemisphere, but temperatures exceed 100 K. This has immediate consequences for the element distribution in the coma/atmosphere of the comet. Instead of a homogeneous distribution of constant gas composition, the element abundances vary for different locations. Its composition is also intriguing from another point. In contrast to the cute rubber duck in your bath, Chury stinks awfully due to a significant abundance of hydrogen sulphide, ammonia, formaldehyde and hydrogen cyanide. To take the analogy to an extreme, you could say the duck’s eggs are rotten.

Besides its rather strong odor, Chury is also very enriched in oxygen (left panel in figure 2). The detection of oxygen around the comet is the most surprising result of the mission so far and the main focus of today’s paper. Not only is there oxygen in the form of gaseous O2 around the comet, but there is a lot of it (about 20 % of all the gas). Researchers are currently trying to explain where it comes from, their best guess is that oxygen originates from the interstellar medium. During the journey towards the Sun, oxygen was likely in the form of frozen water, then released as the comet warmed up. Producing O2 on the comet itself seems to be unlikely since studies of O2 production also predict the abundance of O3 (Ozone), which there is no evidence for (right panel in figure 2).

Another astonishing result is the large size of the dust grains around the comet. Images from Rosetta reveal dust grains that are 0.1 mm in size (much larger than usually assumed dust grain sizes of less than 1 micrometer). Therefore the observation of larger grains and grain growth towards the comets surface is an interesting result for research in planet formation considering that planets are made from dust. At last, let’s consider a point that was already mentioned by Ben is the three times higher deuterium to hydrogen ratio compared to Earth. This observation speaks against the theory that water on Earth has been delivered by comets. Nevertheless, the researchers involved in the mission point out that comets might have delivered some ingredients such as noble gases to Earth.

In summary, the mission has already revealed and will continue to reveal astonishing results such as the unusual chemical composition, especially the high amount of O2, the shape of the comet and its fluffy structure. Further analysis of the chemical composition will be the main focus for the near future. Stay tuned for what’s coming up and how it will help us to understand the origin of the solar system a little bit better!