If you haven’t heard about the Rosetta mission, and the European Space Agency’s remarkable feat of landing on a comet, then you must be like it’s lander Philae: living under a rock.

What you probably also didn’t hear much about is the slew of other ways (both recent past and near future) we are exploring up-close-and-personal the more unusual parts of the Solar System. The tiny stuff; the names you didn’t memorize in grade school. That one that doesn’t get to play with the “big boys” anymore. The years of 2014 and 2015 may well be known as the time when our exploration of the solar system truly took off, as we explored asteroids, comets, and minor planets.

Here’s a look back at what we’ve accomplished in the last year, and what we’re about to achieve in the year to come.

Scroll to the bottom to see an abbreviated list of important upcoming events for these missions. 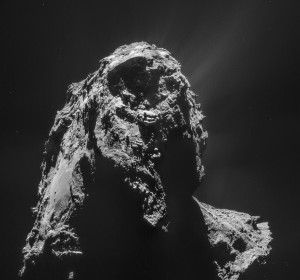 The most recent image of Comet 67P/C-G, taken on January 16th by the orbiting Rosetta spacecraft. Rosetta and its lander Philae (the first objects to orbit and land on a comet) will follow the comet through its orbit to closest solar approach in August 2015. Image c/o ESA

One of the biggest science news pieces of the year, the European Space Agency’s Rosetta spacecraft reached Comet 67P/C-G (right). It began an orbit on August 6th, 2014, after a journey of more than 10 years and 6.4 billion kilometers. On November 12th, the spacecraft’s landing probe Philae became mankind’s first object to land on a comet. Unfortunately, a malfunction in the landing system resulted in Philae bouncing a kilometer off the surface, coming eventually to rest in the shadow of a cliff.

Unable to get adequate sunlight to charge its batteries, Philae quickly went into hibernation mode. Before shutting down it was able to return measurements of gaseous water vapor, but was unable to drill into the surface to measure the content of the solid ice.

Many models suggest that the high water content of Earth may have come from collisions with comets or asteroids during the late stages of the Earth’s formation. Most water is made of ordinary hydrogen and oxygen, but a tiny fraction contains a deuterium atom (a hydrogen isotope made of a proton and a neutron) in hydrogen’s place. One of the main scientific goals of pursuing comets is to identify the source of Earth’s water. The key to accomplishing this is to see if the abundance of deuterium (see this Astrobite) in a comet’s water matches the levels found on Earth. Philae’s water vapor measurements indicate a deuterium abundance more than 3 times higher than on Earth. Perhaps this suggests asteroids are more responsible for Earth’s water supply than comets.

The Rosetta team hopes to be able to confirm this result, and perhaps obtain an ice sample with Philae’s drill, if the lander wakes up. Most of the team has little doubt the lander will resume function in the coming months. But since the orbiting Rosetta still has yet to pinpoint Philae’s final landing spot, the question of when the probe will be able to get the 5 to 7 more watts of energy it needs is a tough question to answer. The comet (and accompanying spacecraft) is approaching the Sun and will reach its closest point in August 2015. The team hopes the change in scenery may bring more sunlight to Philae’s solar cells.

In the meantime, Rosetta will make a close approach orbit of the comet in February 2015 — snapping photos which should resolve details down to a few inches — and is planning to soar through an outgassing jet in July, when the comet’s tail begins to form. The Rosetta mission is scheduled to end in December 2015, although large public support for the mission may help researchers extend its lifetime into 2016.

NASA’s spacecraft Dawn captures images of Ceres: our nearest dwarf planet neighbor and the largest asteroid in the asteroid belt. Dawn will enter an orbit around Ceres beginning in March 2015. Image c/o: NASA/JPL


A few years ago, NASA’s Dawn spacecraft spent about 12 months orbiting Vesta, one of the largest asteroids in the asteroid belt. For more details about Dawn’s encounter with Vesta, see this past Astrobite.

After leaving the orbit around Vesta, Dawn has spent two and a half years traveling across the asteroid belt to catch up to Ceres, the largest known asteroid. On its own, Ceres makes up about 30% of the mass of the entire asteroid belt. It’s so massive, its gravity is strong enough to shape it into a rough sphere, so Ceres is also identified as a dwarf planet.

This week, NASA released the latest images of Ceres (left), taken as Dawn approaches the asteroid. In just a few weeks, on March 6th 2015, Dawn will enter orbit around Ceres. Asteroids and comets are pieces of the debris left over from the formation of the solar system planets. NASA wants to understand Ceres’ formation, its material makeup, and why it didn’t grow any larger. This information will help distinguish between theories that describe how planets formed in our solar system.

As has previously been discussed on Astrobites, long distance observations indicate the presence of water on the dwarf planet. Just like comets, asteroids may be responsible for delivering the Earth’s water supply, and the Dawn team hopes to improve upon these measurements. Dawn’s main science mission continues until July 2015, after which it will be shut off and remain in orbit around Ceres for a very long time. 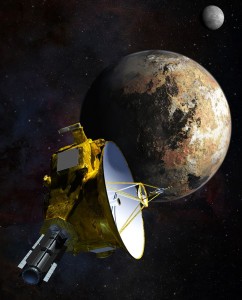 An artist’s illustration of NASA’s New Horizons spacecraft, which will pass by Pluto in July 2015. The spacecraft will not be able to maintain an orbit around the tiny dwarf planet, but will instead fly farther out into the Kuiper Belt. Image c/o: NASA/JPL

Launched in 2006, NASA’s New Horizons has been navigating space for over 9 years, and has perhaps the most exciting itinerary of all the spacecrafts on this list. To save on fuel, New Horizons executed a gravity assist (or slingshot) maneuver around Jupiter in February 2007. Some beautiful photos of Jupiter resulted as an added benefit of this layover.

New Horizons has been in frequent phases of hibernation since it’s encounter with Jupiter, and is now making its approach to Pluto: probably the most popular dwarf planet. On July 14th 2015, New Horizons will make its closest approach within 10,000 kilometers of Pluto. The spacecraft won’t be stopping at Pluto, either, but will continue into the Kuiper Belt to investigate objects astronomers can barely see from Earth. To learn more about New Horizons, and its path after Pluto, see this Astrobite.

The Future of Solar System Science

With Rosetta, Dawn, and New Horizons continuing to gather information, the future looks bright for humanity’s goal of understanding our solar system. Asteroids, comets, dwarf planets, and Kuiper Belt Objects hold many clues for how the planets — including our own — formed from the initial ingredients around the Sun. In the next decade, NASA hopes to complete a mission to capture an asteroid and bring it into orbit around the Moon. This would be a remarkable opportunity to study the remnants of the solar system’s formation.

For the present, here is a timeline of the most important events coming in the future of space exploration: