Move over Philae, we have a new lander in town

Europa is the smallest of the Galilean moons orbiting Jupiter, but it’s potentially one of the most exciting bodies in our diverse Solar System. Why? With oceans of liquid water hiding underneath its icy crust, Europa is an essential target in the search for life beyond our pale blue dot. To uncover the secrets of this mysterious moon we must take one giant leap for aliens everywhere and get to grips with its poorly understood surface. 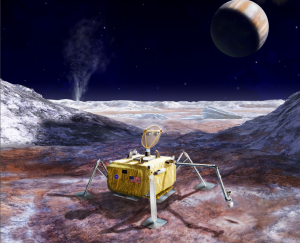 Figure 1: Artist impression of the lander on the surface of Europa. Credit: Michael Carroll

Today’s bite will be going beyond the extremely cool science goals of a recently proposed Europa lander, and focusing on one big question. How do we successfully land on a moon?

Since the beginning of the space race, we’ve sent probes to study the dense Venetian atmosphere, rovers to traverse the rusty terrain of Mars and have even bounced on the duck-shaped comet 67P/Churyumov–Gerasimenko.  There have been many triumphs and failures during our attempt to explore the Solar System (thankfully someone has been keeping score – see Interplanetary Lobbing), but how good are we at landing on moons? So far we’ve had many successful landings on our own Moon, however we have only managed to land on one other moon – Titan (Saturn’s giant moon). Do not fear, as we have also landed on Mars, Venus and even two asteroids. On to our next concern – how do we get to Europa? 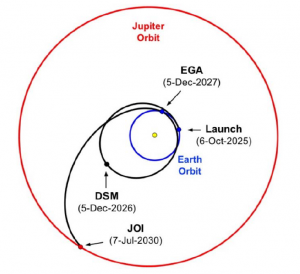 Getting to Jupiter is relatively easy, but putting something in orbit around the giant planet presents more of a challenge. In 1979 it took Voyager 1 546 days to reach Jupiter, but sadly a spacecraft travelling that fast will just fly right on by. To place a spacecraft in orbit around a planet we must take a slower, indirect journey which requires gravity assists. If launched in October 2025, the Carrier and Relay Orbiter (CRO) will travel out towards the asteroid belt before being drawn back towards the Earth because of the gravitational pull of the Sun (DSM – Deep Space Manuever). By December 2027, a close encounter with the Earth (EGA – Earth Gravity Assist) will propel the CRO out to Jupiter’s orbit by July 2030 (JOI – Jupiter Orbit Insertion). Once the JOI is complete, the CRO will require several more gravity assists from the Galilean moons to achieve an orbit around Europa, adding a further 18 months to the journey. Now we’re in orbit, how do send a lander to the surface?

Woah! Now to the surface * 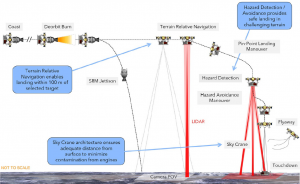 There are two common methods used to place a lander on an extra-terrestrial body which require the use of airbags and/or lander legs. Often scientists make use of the atmosphere and deploy a parachute to slow the craft down – clearly not an option for atmosphere-less Europa. Next a lander will either employ airbags for protection upon impact (limiting the payload) or will use rocket thrusters to control the descent before landing on legs (could pollute the local environment), but neither method was suitable for Curiosity – the most recent successful mission to Mars. Instead NASA used a sky crane to lower the rover to the surface and scientists intend to implement this method again on Europa. There are several reasons for this, but an important one is that it allows for a hazard detection/avoidance system to be put in place. Landing on Europa must utilize a fully automated process because it takes too long to communicate with the CRO. This means the lander must be able to adjust its own course to ensure a successful touchdown on a surface we know so little about, which introduces the next issue – where do we land?

Multiple flybys of Europa have been undertaken courtesy of Pioneer 10 & 11, the Voyager probes and most recently the New Horizons mission, however it was the Galileo satellite in 2003 which has provided the most detailed images to date. As groundbreaking as these images are, we would struggle to place a lander in a safe place of scientific interest without more information. 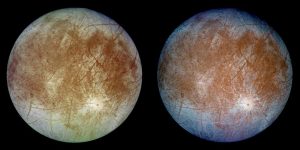 Figure 4:  Some of the best images we have of Europa taken by the Galileo satellite. Credit: NASA

Introducing the Europa Multiple-Flyby Mission! NASA recently selected nine instruments for a future mission to Europa, which could be launched as early as 2020, including cameras and spectrometers for high resolution images of the surface and an ice penetrating radar to determine the thickness of the icy crust. This mission intends to perform 45 flybys of Europa, allowing scientists to identify candidate sites for the lander. If you’re interested in planetary science this could be quite an exciting opportunity, as the SDT intends to host an open, inclusive and publicly visible landing site selection process (see Figure 6.7 of the report).

Having visited comets, planets and other moons, landing on Europa presents one of the best opportunities for discovering extra-terrestrial life. As with all space missions, a Europa lander will require thousands of hours of work by dedicated scientists for the next 8 years and that’s just to get it to the launch pad. If this little spacecraft can survive a launch, several gravity assists and the small matter of a soft landing, it has the potential to test new technology, revolutionise astrobiology and improve our understanding of an unexplored moon. The mission to land on Europa is still in the early stages of development, but combined with the more mature Europa Multiple-Flyby Mission, it seems likely the proposed lander could become a fully fledged, physical craft in the near future.

* I’m really sorry, but I’ve been revisiting the 90s