The Laser Interferometer Gravitational-Wave Observatory (LIGO) collaboration has been receiving a lot of press in recent years, with a run of groundbreaking gravitational wave (GW) detections (most recently, a neutron star binary!), capturing the excitement of the astrophysics community and general public alike. All of the gravitational waves detected so far have been produced by compact binary mergers. This series of LIGO discoveries begs the question – where are the gravitational waves produced by triples? Triple systems are not uncommon in astrophysics – but how would we distinguish a standard compact binary coalescence signal from one produced by a tight binary in orbit around a triple companion? Todays’ paper tackles this question by identifying signatures of the triple that are apparent in the GW signal.

What is a hierarchical triple system?


Triple systems consist of three celestial bodies orbiting each other simultaneously. A physical triple system usually exhibits a hierarchical structure. Two of the objects form a close binary, called the inner binary, and the third companion lies on the outskirts, orbiting at distance that far exceeds the length of the inner binary separation.

Hierarchical triples are prevalent in astrophysics – indeed, we live in the midst of one! The Earth-Moon-Sun is the oldest triple system that humans have ever pondered. It has a clear hierarchical structure: we can straightforwardly decouple the system into separate two-body problems: Earth-Moon and Sun-Earth. There is good reason for the presence of hierarchical structure in a three-body system: removing the hierarchy from a triple rapidly leads to instability and chaos. Triples without hierarchy do not last for long (the third companion is ejected or two of the bodies collide) making them difficult to observe. The emergence of chaos in the three-body problem is a topic that has endlessly fascinated scientists – unlike the two-body problem, no closed form solution exists in general and the evolution of the system can be highly chaotic.

The chance of finding a triple system may vary depending on the surrounding astrophysical environment. A process called common envelope evolution, where all the compact objects share a common envelope of gas, can lead to the formation of close triples. The compact binary object mergers detected by LIGO are believed to have formed in dense stellar environments; triple systems could also emerge dynamically in these surroundings. It is even possible that the influence of the triple companion drives eccentricity oscillations which culminate in a merger (called the Kozai-Lidov effect). A recent bite discussed how three-body interactions and accretion can play a role in facilitating binary mergers. 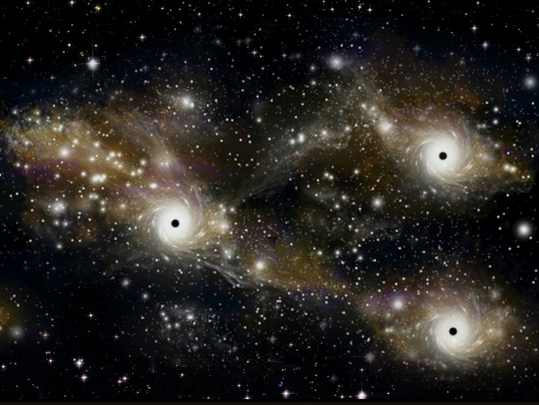 Black holes are commonly expected to reside in triple systems (unless they receive a large kick when they first form); an artist’s impression of such a system is depicted in Figure 2. The inspiral of the inner black hole binary is the potential source of gravitational waves while the third black hole companion has the effect of perturbing the GW signal. Today’s paper explains exactly how the presence of the triple companion will modify the form of the gravitational wave.


We can draw an analogy between a pulsar binary (where a pulsar orbits another astrophysical object) and a hierarchical triple system of compact objects. In the case of the pulsar, the pulse it emits is modulated by its orbit around another body. Similarly, the gravitational wave signal emitted by the inner binary is modulated by its orbit around the third companion.

The third companion modifies the GW signal by adding time delays to the signal. In pulsar binary terminology, these delays can be categorized into three classes: Rømer, Einstein and Shapiro. For example, the Einstein delay

arises due to the time dilation and gravitational redshift associated with the third companion, and the Shapiro delay

accounts for the delay in the signal as it travels through the gravitational well of the third companion.

Figure 3: A schematic of the hierarchical triple system under investigation. The inner binary separation shrinks as it emits gravitational waves. The signal is blue (red) shifted as it moves towards (away) from the observer. Figure 1 in paper.

The most significant contribution is, as for pulses from pulsar binaries, the variation of the line-of-sight distance between the source and the observer as the inner binary orbits the third companion, resulting in a shift in the arrival time of signal called a Rømer delay

(see Figure 3 for a schematic). Figure 3 shows how the path length the signal needs to travel to reach the observer will vary in time as the inner binary orbits the companion; the orbit leads to a red-(blue-)shifting of the signal as the inner binary moves away (towards) the observer. The Shapiro delay is a secondary effect relative to the Rømer delay; it may be noticeable where the third black hole companion is large e.g. an intermediate mass black hole or a supermassive black hole. The time-varying gravitational redshift (Einstein delay) can also be consequential in many cases. 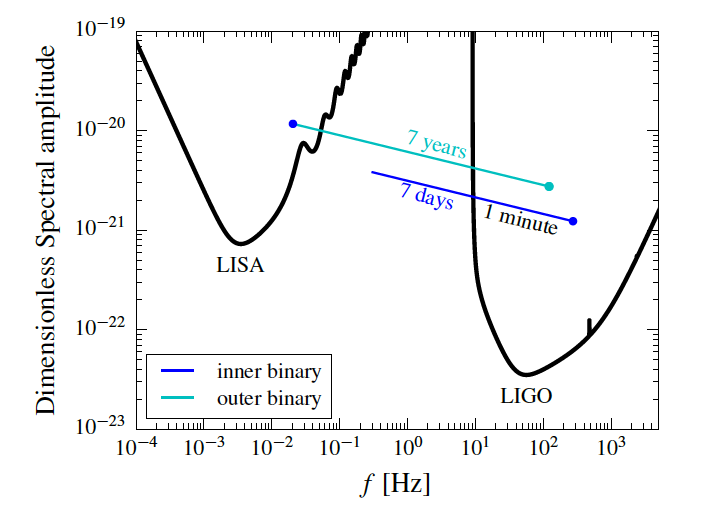 Figure 4. An example of a triple system being coincidentally detected in both the LIGO and LISA bands. Figure 5 in paper.

An amazing consequence of triple systems is the possibility of detecting the system in multiple frequency bands in different detectors! LIGO is the current ground-based gravitational wave detector, while LISA is a space-based detector set to launch in the future (with the immensely successful LISA Pathfinder mission already having demonstrated the effectiveness of the technology) that will detect gravitational waves with a longer wavelength. We can exploit both of these detectors for a single system of compact objects in the following way: as the inner binary merges in the LIGO frequency band, the outer binary can simultaneously be detected by LISA (see Figure 3). Then, once the outer binary separation is small enough, the outer binary could also merge within a few years in the LIGO band! Having several coincident detections for the same system could lead to extremely accurate parameter estimation – as well as being an incredible feat in and of itself!