Title: Gravitational Waves from the Remnants of the First Stars

The detection of gravitational waves (neatly summarized in this excellent astrobites post) provided astronomers with an entirely new way of understanding the cosmos. With the notable exception of a handful of neutrinos from SN 1987A, all of our information about the universe outside of our galaxy had previously come in the form of little packets of electromagnetic radiation known as photons. Gravitational waves, on the other hand, are ripples in spacetime–a totally different phenomenon. They cause the distances between objects in spacetime to change as they pass through.

The Advanced Laser Interferometer Gravitational-Wave Observatory’s (aLIGO) detection of GW150914 (so named because it was detected on September 14, 2015) was the result of the inspiral and merger of two stellar black holes (BHs). The larger of the two black holes was about 36 solar masses and the smaller one about 29 solar masses. This first detection of gravitational waves has already provided enough information for scientists to start inferring rates of black hole-black hole (BH-BH) mergers. 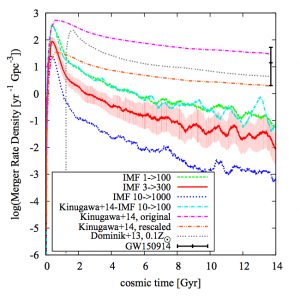 Figure 1 (Figure 2 from the paper) shows the intrinsic merger rate densities for their models (this includes NS-NS, NS-BH, and BH-BH mergers) compared to the literature.  The red shaded area shows the variance for the fiducial IMF. The model from Kinugawa et al. (2014) is reproduced with both the original star formation rate (SFR) and with the SFR rescaled to match this paper’s. The original SFR from the Kinugawa (which does not agree with the 2015 Planck results) paper produces a much higher merger rate density. The Dominik et al. (2013) curve shows the merger rate for later generations of stars (Pop I/II) that have a tenth of the solar metallicity. GW150914’s point shows the estimated merger rate density inferred from the detection, with error bars. The merger rate in the local universe of primordial black holes is much lower than predicted in previous studies, meaning that most of the mergers that we detect should come from stellar remnants of Pop I/II.

The authors of today’s paper estimate the probability of detecting gravitational waves from the very first generation of stars, known as Population III (Pop III), stars with aLIGO. Pop III stars, which are made from the pristine (read: zero-metallicity) gas leftover from big-bang nucleosynthesis, are thought to be more massive than later generations of stars. They are relatively rare in the local universe, but should produce strong signals in gravitational waves thanks to their high masses. Detection rates for their BH-BH mergers should therefore be high.

The authors begin by modeling the formation of dark matter halos from z=50 to z=6 (here z means redshift and translates to about 0.2-1.0 billion years after the Big Bang), when they expect that no more Pop III stars will form. The authors populate their simulated halos with stars of various masses determined by a logarithmically-flat IMF (initial mass function). Since the exact IMF of Pop III stars is unknown, they consider three cases: their fiducial IMF of 3-300 solar masses, a low-mass case where the stars range from 1-100 solar masses, and a high-mass case of 10-1000 solar masses. The total stellar mass in each halo is then determined by the star-formation efficiency, which they make sure is consistent with the results from Planck. 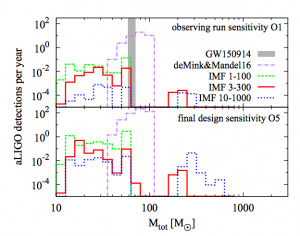 Figure 2 (Figure 3 from the paper) shows the expected number of BH-BH merger detections as a function of the total mass of the binary system. The top shows the current sensitivity of aLIGO and the bottom shows the final sensitivity. The gray bar indicates where GW150914 falls. The de Mink & Mandel (2016) histogram indicates the estimated rate of Pop I/II star detections. As we can see, mergers from remnants of Pop I/II stars are expected to dominate in the mass range between 30 and 100 solar masses. However, if aLIGO detects enough events that result from binary systems with approximately 300 solar masses and above (which must come from Pop III stars), it will be able to discriminate between the three Pop III IMFs (initial mass function–basically the distribution of masses) discussed in this paper.

Like tango, it takes two to make gravitational waves, so they use previous studies of Pop III stars to get an estimate for the fraction of the stars in binary systems. The probability for any single star to be in a binary is 50% in their model, but they note that it is easy to scale their results with different fractions of binary stars. The authors also take into account the fact that stars in binary systems usually have similar mass and that stars in the 140-260 solar mass range are expected to blow apart completely as pair-instability supernovae, leaving no compact remnants (i.e. black holes) behind. They then calculate the signal-to-noise ratio of a single aLIGO detector for each of their mergers and to determine if something is a detection.

The result? Compared to previous studies which do not match the results of the Planck paper quite as well, their star formation rates are lower, as are their merger rate densities. They also find that the number of mergers they expect is largely dominated by the maximum mass in each distribution, since less massive stars produce neutron stars instead of black holes, which have a lower merger rate. On the other hand, the merger rate density decreases as the masses of the stars get higher since fewer high-mass binary pairs are formed in any given location. Figure 1 shows the merger rate densities that they obtained for each of their mass distributions.

Even with all of this information, how would we know that what we have detected is of primordial origin (and not something that formed more recently)? Since Pop III stars are more massive than their later counterparts, any remnants with masses greater than 42 solar masses must have come from the earliest stars (even stars with a tenth of the metallicity of our Sun would not leave remnants more massive than this). Thus the contribution to the BH-BH merger rate from Pop III stars varies as a function of the mass of the mergers, which is demonstrated in Figure 2. Though the primordial BH-BH merger rate that we could detect would be small, the massiveness of the black holes will make their gravitational wave signal stronger and thus easier to detect. This means that given our detection rate of BH-BH mergers, we might be able to rule out or put bounds on our Pop III mass distribution.

They conclude that GW150914 had about a 1% probability of being from primordial origin and estimate that aLIGO will probably be able to detect about 5 primordial BH-BH mergers a year. By looking at the rate of BH-BH mergers that we actually do detect, we’ll also be able to learn about the stars that these remnants originated from.