You may be familiar with the tagline from the movie Alien, “In space, no one can hear you scream”, but what if I told you on cosmological scales there is somewhat of an exception? During the earliest periods of the universe, cosmic forces led to a phenomenon that would be analogous to sound. In today’s bite, we will see how astronomers plan to detect these oscillations.

The competing forces of gravity and radiation pressure, caused fluctuations in the densities of galaxies and the Intergalactic Medium (IGM), resulting in periodic dense and under-dense regions of space. The oscillations in density are what we refer to as Baryon Acoustic Oscillations (BAOs). They provide a standard ruler for cosmological scales comparable to how supernovae are used as standard candles, and therefore can be very useful for constraining cosmological parameters.

How to detect Ancient Sound

The Square Kilometer Array (SKA) is one of the most ambitious, if not the most ambitious radio telescope arrays ever proposed. It will cover the radio bandwidth of 50 MHz to 14 GHz by utilizing several different antenna designs and have a square kilometer of collecting area. Today’s paper only concerns the Phase 1 mid to high frequency (350 MHz to 14 GHz) array of the SKA, known as SKA1-Mid.

Detection of BAOs can be accomplished by a large scale mapping of unresolved emission from neutral hydrogen (HI), also known as the 21cm emission (for its wavelength). HI can give us this ability to map out huge swaths of space, as it is the most abundant element in the universe and exists everywhere. However it’s not as simple as using a radio telescope and pointing towards the sky. Galactic and extragalactic foregrounds that are extremely bright can overpower the BAO signal and there is also the issue of the instrument’s response (how the receiver sees a signal) and noise. To determine the feasibility of detecting BAOs using SKA1-Mid with this technique, the authors turn to simulation. They simulate a cosmological HI signal and galactic/extragalactic foregrounds, as if they were observed by the proposed SKA1-Mid in single dish mode for intensity mapping. There were then 3 versions of the final simulations to compare, one with just the cosmological HI signal, the HI signal + instrument noise, and the HI signal + foregrounds + instrument noise.

Some wiggle room for BAOs 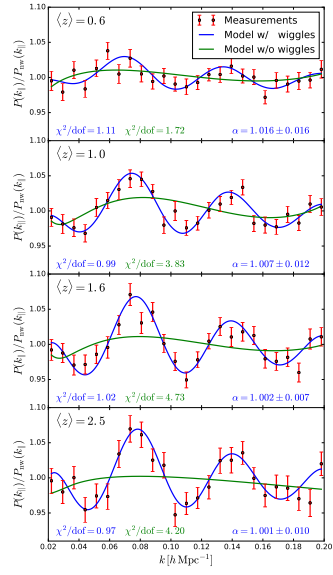 Figure 1: Measurements of a simulation (Red) with only the HI cosmological signal. It can be seen that the models with BAOs (Blue) closely follow the measurements of the HI signal, but the real test is whether the SKA1-Mid can detect the BAO signal through foregrounds and noise.

The authors report a difficulty in accurately pinning down a BAO detection at low (z~0.6) and high (z~2.5) redshifts. At low redshifts a detection is limited by a weak BAO signal, while the high redshift region is limited by the telescope beam size smearing out the signal and reducing the signal to noise ratio. In Fig. 1 the cosmological HI signal (free of noise or foregrounds) was sampled and fit to 2 models, a BAO and non-BAO model. In that case, a very clear detection could be technically possible. They go on to show that when including foregrounds and instrument response, the number of simulations with clear detections over redshift begin to drop. The highest redshift bin closest to the end of reionization at z=2.5, shows a decline to 75% of simulations with a clear BAO detection.

These results point out that a potential BAO detection for the SKA1 could be right around the corner, lending support to previous BAO measurements by the Sloan Digital Sky Survey and WiggleZ. We are certainly entering an exciting era of radio astronomy and cosmology. These new instruments have the ability to give us a wealth of new information on BAOs, fast radio bursts, the epoch of reionization and the cosmic dark ages.