In a time long long ago…

The story we’re hearing today requires us to go back to the beginning of the Universe and explore briefly its rich yet mysterious history. The Big Bang marks the creation of the Universe 13.8 billion years ago. Seconds after the Big Bang, fundamental particles came into existence. They smashed together to form protons and neutrons, which collided to form the nuclei of hydrogen, helium, and lithium. Electrons, at this time, were wheezing by at such high velocities to be captured by their surrounding atomic nuclei.  The Universe was ionized and there were no stable atoms.

The Universe coming of age: Recombination and Reionization

After 300,000 or so years later, the Universe had cooled down a little bit. The electrons weren’t moving as fast as before and could be captured by atomic nuclei to form neutral atoms. This ushered in the era of recombination and propelled the Universe toward a neutral state. Structure formation happened next, where some of the first structures to form are thought to have been quasars (actively accreting supermassive black holes), massive galaxies, and the first generation of stars (population III stars). The intense radiation from incipient quasars and stars started to ionize the neutral hydrogen in their surroundings, beckoning the second milestone of the Universe known as the epoch of reionization (EoR). Recent cosmological studies suggested that the reionization epoch began no later than redshift (z) ~ 10.6, corresponding to ~350 Myr after the Big Bang.

To probe when reionization ended or completed, we can look at the spectra of high-redshift quasars and compare them with that of low-redshift quasars. Figure 1 shows this comparison. The spectrum of a quasar at z ~ 6 shows almost zero flux in the region of wavelengths shorter than the quasar’s redshifted Lyman-alpha line. This feature is known as the Gunn-Peterson trough and is caused by the absorption of the quasar light when it travels through the neutral space and gets absorbed by neutral hydrogen. Low-redshift quasars do not show this feature as the hydrogen along the path of the quasar light is already ionized. Quasar light does not get absorbed and can travel unobstructed to our view. The difference in the spectra of low- and high-redshift quasars suggests that the Universe approached the end of reionization around z ~ 6, corresponding to ~1 Gyr after the Big Bang. (This astrobite provides a good review of reionization and its relation to quasar spectum.) 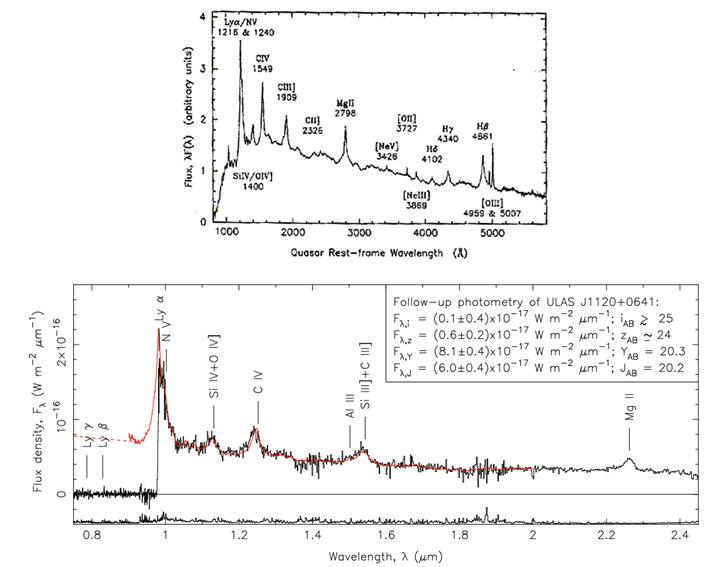 Fig 1 – The top panel is a synthetic quasar spectrum at z = 0, compared with the bottom panel showing the spectrum of the current known highest redshift quasar ULAS J112001.48+064124.3 (hereafter ULAS J1120+0641) at z ~ 7.1. While the Lyman-alpha line of the top spectrum is located at its rest-frame wavelength of 1216 nm, it is very redshifted in the spectrum of ULAS J1120+0641 (note the scale of the wavelengths). Compared to the low-redshift spectrum, there is a rapid drop in flux before the Lyman-alpha line for ULAS J1120+0641, signifying the Gunn-Peterson trough. [Top figure from P J. Francis et al. 1991 and bottom figure from Mortlock et al. 2011]

Problems with Reionization, and a Mini Solution

The topic of today’s paper concerns possible ionizing sources during the epoch of reionization, which also happens to be one of the actively-researched questions in astronomy. Quasars and stars in galaxies are the most probable ionizing sources, since they are emitters of the Universe most intense radiation (see this astrobite for how galaxies might ionize the early Universe). This intense radiation falls in the UV and X-ray regimes and can ionize neutral hydrogen (and potentially also neutral helium, which requires twice as much ionizing energy). But, there are problems with this picture.

First of all, the ionizing radiation from high-redshift galaxies are found to be insufficient to maintain the Universe’s immense bath of hydrogen in ionized state. To make up for this, the fraction of ionizing photons that escape the galaxies (and contribute to reionization) — known as the escape fraction — has to be higher than what we see observationally. Second of all, we believe that the contribution of quasars to the ionizing radiation becomes less important at higher and higher redshifts and is negligible at z >~ 6. So, we have a conundrum here. If we can’t solve the problem of reionization with quasars and galaxies, we need other ionizing sources. The paper today investigates one particular ionizing source: mini-quasars. 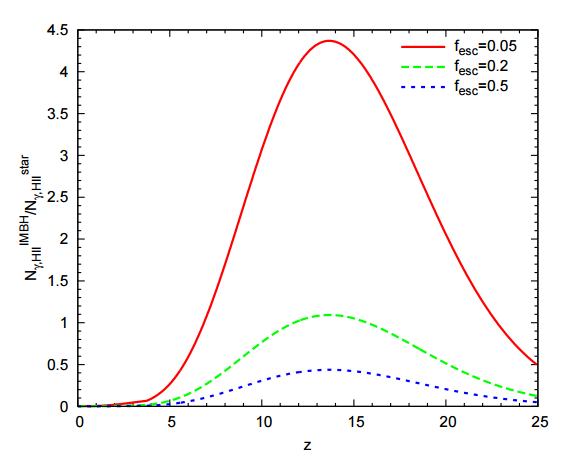 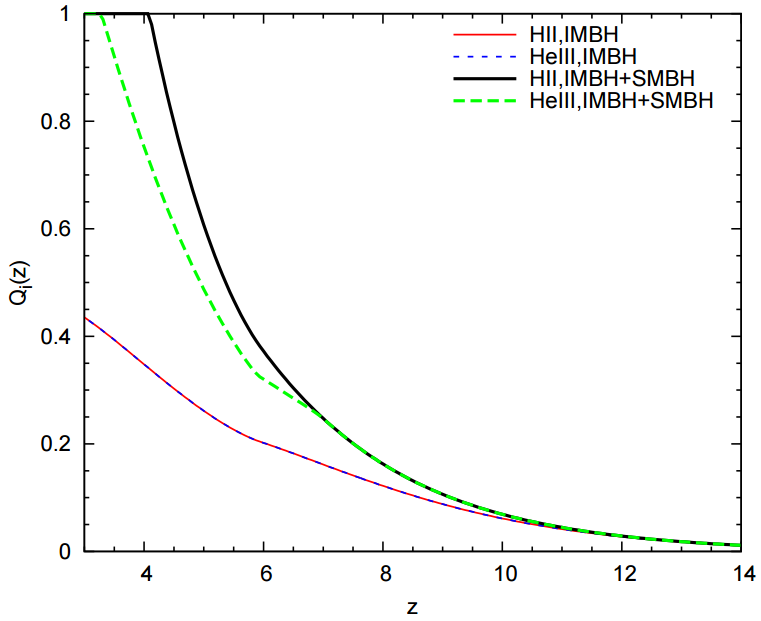 Fig 3 – Volume of space filled by ionized hydrogen and helium, Qi(z), as a function of redshift z. The different colored lines signify the contributions of mini-quasars (IMBH) and quasars (SMBH) to hydrogen and helium reionizations. [Figure 3 of the paper] 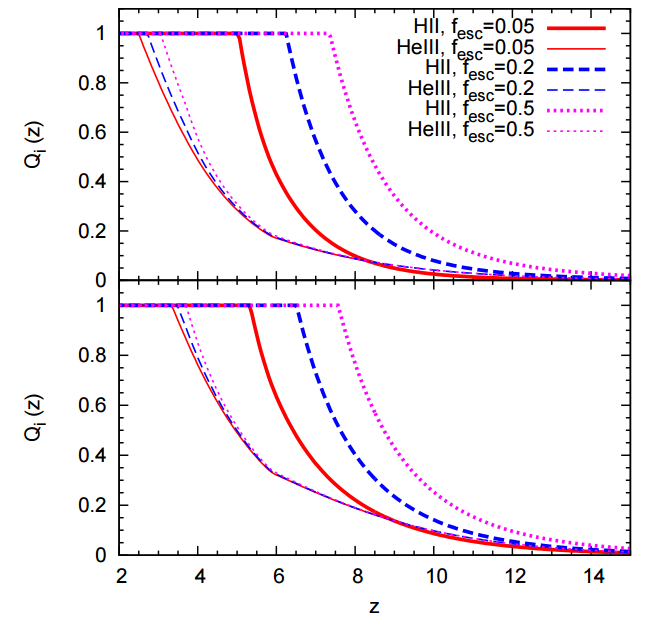 The authors caution against a couple of caveats in their paper. Although they demonstrate that contribution from mini-quasars is not negligible, this is only for the most optimistic case where all photons from the mini-quasars contribute to reionization. The authors also did not address the important issue of feedback from accretion onto IMBHs, which regulates BHs growth and consequently determines how common mini-quasars are. The escape fractions from stars also need to be better constrained in order to place a tighter limit on the joint contribution of mini-quasars and stars to reionization. Improved measurements of helium reionization would also help in constraining the properties of mini-quasars. Phew….sounds like we still have a lot of work to do. This paper presents some interesting results, but we are definitely still treading on muddy grounds and the business of cosmic reionization is not any less tricky than we hope.