This guest post is written by Ziad Sakr, a PhD student between Toulouse and Beirut. He works on everything related to cosmology, theoretical and observational issues, especially how to constrain theories of modified gravity using Clusters of Galaxies.

Light and Matter Interactions in a Cosmological Context

According to the Big Bang theory, the universe started as a hot, dense medium. Elementary particles were created, forming protons and neutrons, which eventually (380000 years later) combined into neutral atoms. One billion year after that, stars and galaxies begin to form, producing light and ultraviolet radiation that reionized the atoms. The formation of Active Galactic Nuclei can also equally contribute to this phenomenon.

What the contributions of these two sources (stars in galaxies or AGNs) are to this reonization is still in debate. The ionization must not be followed by a recombination, so a certain fraction of the ions and electrons must escape the galaxies to where the density of ions and electrons is low. Small and intermediate galaxies that blow their gas are good candidates, but we do not observe the appropriate escaping fraction. Exceptionally bright AGN known as QUASARS couldn’t account for it either. Mini-quasars were suggested to be added to account for the missing part. This works with the assumption that the escape fraction of particles from galaxies is enough small. In the same spirit, this paper investigates if adding ultra faint galaxies could be sufficient to fill the gap of missing energy sources for reionization.

The idea is to detect the faint galaxies, estimate their luminosities and constrain the ultraviolet luminosity function. This function is simply how many galaxies are found having a certain luminosity that lies in the ultraviolet range. Fitting a plot representing this function (Figure 1) with these new observation points, the authors hope to find a slope steeper than what is known and thus by integrating the energy flux density over all the magnitudes we get a bigger overall value that could account for the observed cosmic reionization.

To perform these steps, the researchers pointed first the Wide Field Camera onboard the Hubble Space Telescope (HST) with filters to detect their candidates from the ultraviolet dropout at the Lyman alpha wavelength, a characteristic of the intervening hydrogen between the observer and the distant galaxies.

They used next HST in the optical band to observe through the gravitational lensing of massive clusters. The light from background faint galaxies is bent, concentrated and magnified by this lensing allowing observation of faint galaxies’ mass and volume. 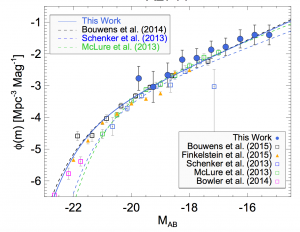 Figure 1: UV logarithmic luminosity function at z=7 for one of the fields. The blue circles are obtained by this research and the lines are fittings for the Schechter analytic Luminosity Function. The more negative values indicate a brighter magnitude (from a traditional convention). Notice the steepness required for this work to account for the captured data but also the large error bars relative to other studies.

They detect 227 galaxies at z = 6-7 and 25 at z = 8 (around 13.5 billion years from now!). Combining their results with previous studies on brighter galaxies, they try to get the slope of the faint end of the Luminosity Function (LF) by performing a fitting that depends on the accuracy of the observations. We see in Figure 1 that with the addition of the new data, steeper slope is needed, favoring the hypothesis of the paper.

Now to know whether the new determined ultraviolet LF is sufficient to reionize the intergalactic medium, they need to assume additional parameters, like how much of this ultraviolet luminosity is able to ionize the medium or the escape fraction we mentioned before, etc… Taking those corrections into account and after integrating along the whole luminosity range down to Muv = -15, they obtained a value that lies within 68 % of the theoretical limits required to maintain the IGM ionized at z = 7 (see Figure 2). These findings are very consistent with calculations although a better precision is still needed.

What This Study Adds

This paper shows the advantage of combining two capabilities of HST. The lensing detection from optical capture of the shear of light caused by massive objects is the first one. Appropriate filters to determine faint galaxies number densities being the second. However, to determine the contribution of different sources of reionization, like galaxies or AGNs, putting aside some technical and theoretical issues, more precise data are needed to eliminate uncertainties (notice the increase of error bars in Figure 1 for fainter limits). We hope that the more powerful upcoming telescopes, JWST and WFIRST for example, should “enlighten” us more on this subject. 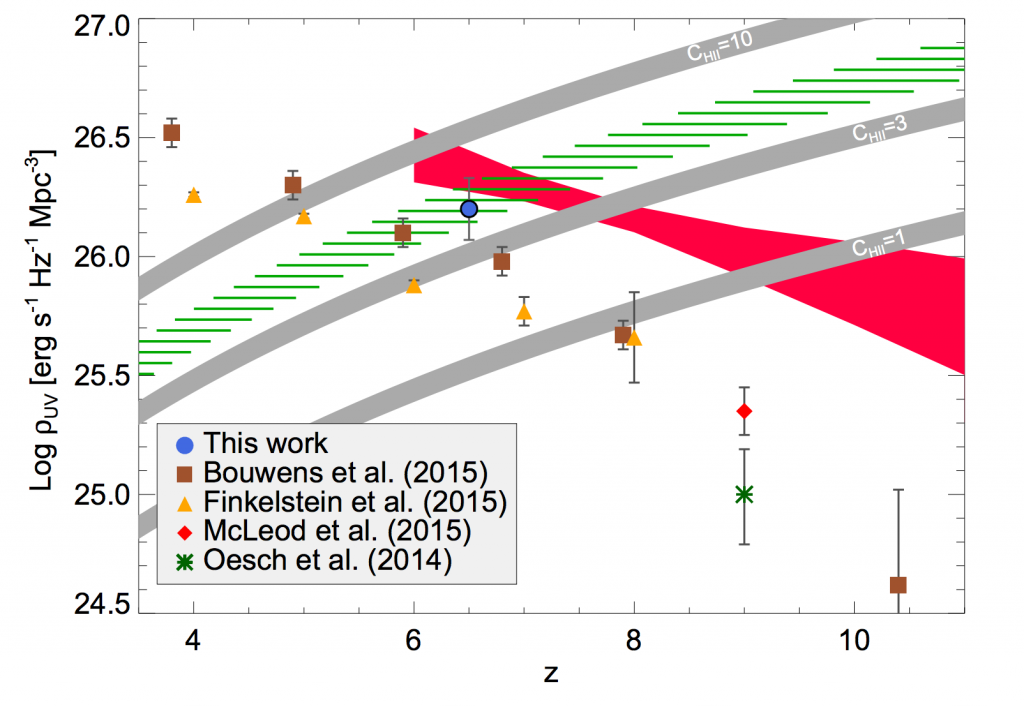 Figure 2 : The evolution of the UV luminosity density of galaxies with z. The value obtained for this work is the result of integrating the LF in Fig . 1 to Muv = -15. We can see that it lies at the intersections of regions (the green dashed, the red and grey shaded) of theoretical calculations obtained from other studies having the same characteristics in common. The other brown, yellow, red and greens points are values from other studies computed for less faint luminosity cutoffs like -18 and -17 for different redshifts.