The Epoch of Reionization

The basic process of reionization: radiation eats away at the neutral medium, creating HII (ionized hydrogen) bubbles, until the universe is completely ionized

When we look out at the universe today, we can see that most normal matter is in the form of free protons and electrons — that is, the universe is ionized.  But it hasn’t always been this way. About 300,000 years after the Big Bang the original primordial plasma cooled down enough that protons and electrons combined to form neutral hydrogen atoms, creating the Cosmic Microwave Background in the process. Between that point and today, something must have happened to convert all of that neutral matter back into an ionized state. The search for this process, known as the Epoch of Reionization (EoR), is one of the most exciting topics in modern cosmology (see these Astrobites for previous work on the topic).

To ionize hydrogen, we need a source that produces radiation more energetic than 13.6 eV: ultraviolet light or stronger. We expect that in the early universe this radiation was provided by the first stars and galaxies. As these objects produced ionizing light, they would have eaten away “holes” in the neutral medium in which they were embedded, in a sort of “swiss cheese” topology. Eventually these ionized bubbles overlapped, creating the universe we see today.

Through observations of quasar spectra and the Cosmic Microwave Background, we have roughly constrained the redshift boundaries of reionization. We know that at z > 10 the universe was still mostly neutral, but that by z = 6 reionization was close to complete. However, seeing the structures of neutral and ionized hydrogen during this period would provide insight into the actual ionization mechanism. This is where 21 cm observations come in. Neutral hydrogen emits radiation at this wavelength, so if we could detect the highly redshifted emission at different stages in the universe’s evolution, we could in principle get a 3-dimensional image of the structure of the intergalactic medium (IGM) during reionization. 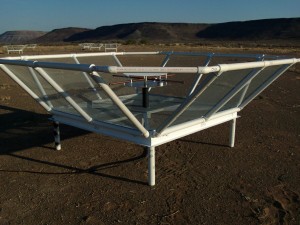 A PAPER dipole antenna in the Karoo desert

The 21 cm line in our rest frame corresponds to 1420 MHz, but hydrogen at a redshift of 7.7 would be observed at a frequency of 1420 MHz / (1+7.7) = 163 MHz, so observing the same redshifted gas during reionization requires long wavelength radio astronomy. The PAPER (Precision Array for Probing the Epoch of Reionization) instrument consists of many dipole antennas connected in an interferometer, with the main science observations conducted with a 32-element deployment in the Karoo desert of South Africa. These antennas are sensitive to 100-200 MHz radiation.

The first goal of this EoR experiment is to make a positive detection of the neutral hydrogen signal.  But instead of looking a a map of the hydrogen intensity in real (i.e. position) space, we decompose the map into its Fourier components and make a power spectrum.  This transformation shows the amount of structure on the sky as a function of lengthscale, parametrized by a wavevector k.  Large wavevectors correspond to small physical scales, and vice versa.  So a power spectrum with strong high-k components indicates that the map has lots of small-scale structure.  As an interferometer, PAPER directly measures Fourier modes on the sky perpendicular to the line of sight, and accesses modes parallel to the line of sight through the Fourier transform of frequency data.

In principle, this is an easy measurement to make. Just tune your antenna to your desired redshifted frequency, calculate a power spectrum, and you’re done!  An enormous problem, however, is the existence of the Galaxy’s synchrotron radiation, which is very strong at these low frequencies. Extragalactic point sources also contaminate the measurements, and manmade radio frequency interference can also show up (explaining PAPER’s remote location).  Foreground emission is expected to exceed the EoR signal by 9 orders of magnitude! Fortunately, in the frequency domain, foregrounds look different from the cosmological signal.  In this work PAPER uses a new technique called delay-spectrum analysis to separate out foregrounds.  Galactic foregrounds are smooth and coherent over the 100 MHz bandwidth of the experiment, while the 21 cm signal is not.  Using this fact, delay-spectrum analysis suppresses contaminating signals by over 8 orders of magnitude.

The basic result is shown below: a new upper limit on the power spectrum of neutral hydrogen at z = 7.7. This cosmological bin was chosen because it offered the lowest noise and foreground residuals. For a wavevector k of 0.1 h Mpc^-1, the 2-sigma upper limit is 2700 mK^2.  This means that after foreground subtraction, PAPER is confident that at z = 7.7,  there was not enough neutral hydrogen to produce a signal stronger than 52 mK at these lengthscales.  This limit is an order of magnitude lower than the previous upper limit, attesting to the sensitivity of the experiment and the robustness of the foreground suppression. 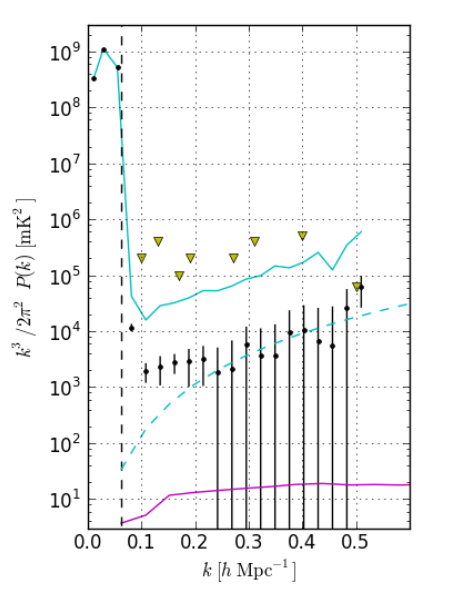 But what does this number mean for the reionization process? It allows for a constraint on the mean 21 cm brightness temperature, which in overdense regions is proportional to the overdensity, and in partially ionized regions is proportional to the neutral fraction. Constraining this parameter allows different reionization models to be tested. Importantly, the measurements are inconsistent with a potential scenario in which the IGM gas cools just from adiabatic expansion.  This result is evidence that there was large-scale heating of the neutral IGM during reionization at z > 7.  The most likely sources are X-ray heating from supernovae, high-mass X-ray binaries, or small quasars.

The PAPER results are already within an order of magnitude of the expected EoR signature. Several other 21 cm experiments also exist, such as GMRT, LOFAR, and MWA. As these projects take more data, add more antennas, and new experiments such as HERA come online, it’s just a matter of time until we detect a real reionization signal!