A Radio Bright Quasar at the Edge

Title: A Powerful Radio-Loud Quasar at the end of Cosmic Reionization

First Author’s Institution: The Observatories of the Carnegie Institution for Science, Pasadena, CA

Quasars are some of the most interesting astronomical objects, able to provide us with information across both astrophysics and cosmology. When a quasar with unique properties, such as being exceptionally luminous is discovered, it’s particularly eye-catching. This is because it can provide an opportunity to make measurements that wouldn’t be possible otherwise, as we will explore in today’s astrobite.

What’s all the fuss about quasars?

Astronomers look to quasars because of the extreme conditions surrounding their existence. They are exceptionally bright and emit across the entire span of the electromagnetic spectrum. These luminous emissions are thought to be due to the accretion of gas onto a supermassive black hole at the center. So you might be asking yourself, if these are so bright, why do we even need telescopes to see them? Well that’s because most quasars are at incredible distances, located at redshifts of z > 0.1, meaning relative to anything local to us, they’ll appear very dim. In fact the closest quasar to us, Markarian 231, is still at a measurable redshift of z=0.04.

Figure 1: Flux density of a quasar emission across observed wavelengths. The rapidly varying peaks from ~ 4300 to 4900 Angstroms is known as the Lyman Alpha Forest, where dips correspond to neutral hydrogen that have absorbed Lyman Alpha photons. Taken from http://www.aip.de/groups/cosmology/im.html

What we want to highlight today are quasars on the opposite end of that spectrum, those that are very far away, at high redshift. These types of quasars can give us direct probes to intermediate periods in the Universe’s history, like a certain epoch that may have left the Universe reionized. One way a quasar can tell us about the timeline of the Universe is through the Lyman alpha Forest, which provides us with hints about neutral hydrogen content in the intervening intergalactic medium (IGM). This happens when higher energy UV emissions (shorter wavelength than the Lyman Alpha line) from high redshift galaxies get redshifted into the Lyman Alpha absorption range. This leaves dips in the flux density when observed here on Earth, like in the example in Figure 1. We can directly relate these dips in the flux density to the redshift location of neutral hydrogen.

The Epoch of Reionization (EoR) is a period in cosmic history when neutral hydrogen from the early universe became reionized. This was due to the earliest stars and galaxies generating an abundance of ionizing UV radiation which systematically reionzied the surrounding hydrogen beginning somewhere around a redshift of 12 (300 Myr after the Big Bang). This process, based on our best “guess”, has reionization completing somewhere in the region of redshift 6. Having a rough idea when the EoR ended gives us a great starting point to begin searching for additional evidence of the reionization process. Thus why we are very excited about discovering quasars at very high redshift, because they can directly probe the amount of neutral hydrogen present in the IGM. 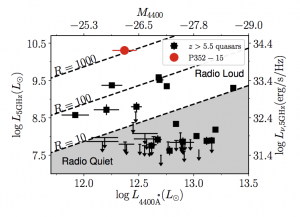 Figure 2: The relative log luminosities of quasars at 4000 Angstroms to radio emissions at 5GHz. This shows that the quasar P352-15 is radio brightest of all competing high redshift quasars. Figure 4 from the paper.

Now moving onto the new discovery, the radio brightest high redshift quasar PSO J352.4034-15.3373. Only 15-20% of all quasars are considered radio loud, meaning that radio emissions are the brightest components of the quasar spectrum. This newly discovered quasar, which was determined to be at redshift z=5.82, has a radio flux density an order of magnitude greater than the next best radio loud high redshift quasar (see Figure 2)! The peak flux density of PSO J352-15 was measured to be approximately 100 mJy in the observing frequencies of 3GHz to 230MHz. In comparison, Cygnus A, one of the brightest radio galaxies nearby has a flux density on the order of 10-100 Jy, which demonstrates why these high redshift quasars are difficult to see.

Of particular interest to reionization is the spectroscopic follow-up of PSO J352-15. In Figure 3 we can see that compared to the quasar template (blue dashed line), there is a sharp drop-off in flux density at 8300 Angstroms. Similar to the Lyman Alpha Forest mentioned before, this sharp absorption feature hints to a dense nearby environment, which means lots of neutral hydrogen. This interesting feature of PSO J352-15 puts it in a good position to probe for 21cm EoR measurements using radio telescopes such as the Murchison Widefield Array or Giant Meterwave Radio Telescope. 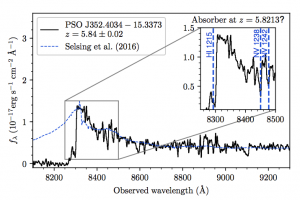 Figure 3: Flux density measurement over observed wavelengths of the quasar PSO J352.4034-15.3373. A sharp drop-off at a wavelength of ~8300 Angstroms indicates that between us and the quasar is a very dense lyman alpha absorbing environment. Figure 1 from the paper.

Going beyond cosmological implications, the authors additionally point to future potential studies for PSO J352-15 that could include radio-jet measurements to understand how supermassive black holes form, and how important radio-mode feedback is to the earliest galaxies. To see additional information on PSO J352-15 you can check out the companion paper which goes into the components and morphology of the quasar.