The early universe encompasses many scarcely understood phenomena both cosmological and astrophysical that we hope to begin exploring. This can be made possible by looking at the highly redshifted 21cm emission (see here for why this emission happens) from neutral hydrogen which puts these observations from the cosmic dawn relevant to today’s astrobite into the radio frequency range of 100-140 MHz. But this signal is notoriously faint, and requires some of the most sensitive instruments ever designed to observe it. Currently this is an emerging field where most of the instruments with the necessary sensitivity are only now entering the development stage. This certainly won’t stop us from understanding the potential pitfalls we may encounter along the way in measuring the early universe. We can of course anticipate how well we can detect this signal through simulations of the 21cm emission and our next generation radio telescopes.

When the first galaxies began to form they also began to emit UV radiation. This UV radiation reionized the surrounding neutral hydrogen, which means that it can no longer emit the 21cm emission. From our perspective when observing this we see large spherical holes (bubbles) begin to form over time, making a ‘Swiss cheese’-like effect at the largest scales. To make up for a lack of bubble observations, simulations of bubble formation from the Dark ages Reionization & Galaxy Formation Simulation (DRAGONS) (for an example see Fig. 1) were created.

Fig 1: Example of two galaxies with similar luminosities and solar mass from the DRAGON simulation. The progression of reionization of the galaxies is seen in the form of growing bubble size over redshift.

Using information about mean bubble size and luminosity from DRAGONS, a relationship between the two can be found. This helps us in sampling appropriate galaxies to survey from the future Wide-Field Infrared Survey Telescope High Latitude Survey  (WFIRST-HLS). Fig 2. shows that the mean bubble size

, increases linearly with luminosity. (Another example of associating bubble size and luminosity can be seen in this astrobite.) 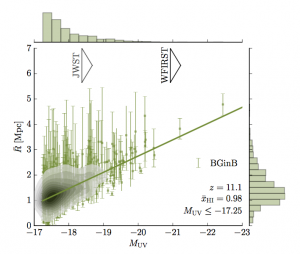 Fig. 2: The authors show through simulation of reionization bubbles around galaxies that they have a linear relationship between the mean bubble size

and the UV magnitude

21cm Bubble Observing with the SKA

The Square Kilometer Array (SKA) is an upcoming radio interferometer array located in South Africa and Western Australia. It will consist of 1 sq. km of collecting area, making it the most sensitive array to ever exist, and a perfect instrument for observing the 21cm signal. Observation of the 21cm signal is dependent on the differential brightness temperature,

The differential brightness temperature depends on the dark matter over-density

(small fluctuations in the density), the spin temperature

, and the fraction of neutral hydrogen

. It’s important to note that

is spatially dependent, as both

For simulating the observation of the 21cm differential brightness temperature from the cosmic dawn, they use the  SKA1-Low specifications which determine the sensitivity (see here for some basic interferometry) and observational hours required . But the sensitivity of the SKA isn’t enough, so stacking spectra (averaging observations over frequency) must be used. By focusing on high redshift galaxies (z > 9) predicted from the WFIRST-HLS, and stacking future SKA1-Low observations centered on these galaxies, the bubbles from reionization should be observable. An example of how likely these bubbles can be measured is seen in Fig. 3, which shows that the signal to noise ratio (SNR) grows considerably for stacking 100+ galaxy observations in the case where

Fig. 3: The SNR for observing reionization bubbles increases if more spectra are stacked (100,200,300) and if

is saturated (right), which means

It appears from the author’s results that imaging individual bubbles from reionization doesn’t seem too likely as there is too much uncertainty in redshift and a high sensitivity required from the radio interferometer. But the technique the authors of today’s astrobite describe of stacking spectra over many galaxies does appear to provide that extra sensitivity for a measurement. There is also the big caveat of this being an ideal case, because our observations of the early universe are troubled by bright galactic and extragalactic foregrounds. The work in this astrobite also demonstrates that making a measurement of reionization and its characteristic bubbles may rely on a synthesized approach e.g. using both 21cm and near infrared observations.