It’s a generally accepted idea that the earliest galaxies reionized the universe, however it’s always interesting and fun to explore potentially rare sources, especially when they’re as cool as AGN. Now “what are AGN ?” you may ask. Active Galactic Nuclei, such as quasars, are a galaxy with a compact core that are thought to host supermassive black holes at their center. These central black holes accrete matter surrounding them, causing these galaxies to have an abnormally high luminosity across the electromagnetic spectrum. Initially it was thought that AGN at high redshift were uncommon and therefore could not be a primary source for reionization. Recent detections of high redshift AGN have changed that outlook and this motivates today’s astrobite about how AGN affect the 21cm signal from reionization. 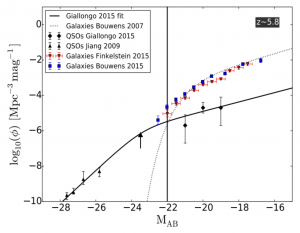 Figure 1: AGN luminosity function showing the Giallongo (2015) faint AGNs (QSOs) at redshift z = 5.8. This shows that there are potentially more AGN at high redshift than initially thought and provides more motivation for the possibility of an AGN dominated reionization scenario. (Taken from Chardin 2017)

The original understanding of the AGN luminosity function was that it had a relatively flat faint end at high redshift, meaning that the number of faint galaxies increased slowly as you moved to lower luminosities. This was somewhat upset when work was released by Giallongo et. al (2015), which shows that they were able to find ~20 AGNs at high redshift. These AGNs lifted the faint end of the luminosity function (see Figure 1) which led to a natural question of, “could these newly found faint high redshift AGN account for the necessary photons for driving reionization?”

This wasn’t the only recent evidence supporting an AGN dominated reionization, as measurements of the Lyman

opacity (how many photons are transmitted through) fluctuate at scales supposedly much larger than you’d see in a galaxy dominated reionization. In light of this fact, it can be inferred that AGNs could have had a more important role in reionization.

So now that we’ve established some motivation for why these objects are interesting in terms of reionization of the universe, is it possible to discern an AGN or galaxy driven reionization from the 21cm neutral hydrogen signal?

The affect of AGN on the 21cm signal 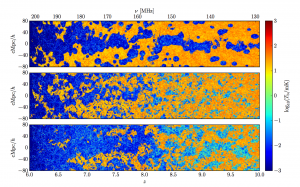 Figure 2: The top panel shows the 21cm signal over redshift as driven by AGNs, while the bottom two panels are galaxy driven reionizations. There is a distinct difference between these two scenarios, where for AGN reionization the 21cm signal will be more clumped together while galaxy reionization would be more patchy.

To understand AGN reionization the authors in today’s astrobite used the Sherwood hydrodynamical simulation which has a high dynamic range (meaning it retains important information at small and large scales). To model the AGN in the simulation the

relation (learn more about this relationship here) is used to approximate the blackhole mass which in turn can give the number of ionizing photons. The results of this simulation can be seen in Figure 2, where the top panel demonstrates the AGN dominated reionization in the form of the 21cm signal over redshift. In terms of the spatial fluctuations of the 21cm signal in these simulations there is a clear difference of scale for reionization ‘bubbles‘ in the AGN and galaxy versions. The AGN dominated scenario has an obvious amount of clumping in the 21cm signal where the galaxy dominated is more patchy. Luckily this distribution translates to a somewhat unique type of 21cm signal which has more power located on the largest scales (for galaxies the 21cm signal would be more faint at all scales).

When we finally do approach the sensitivities that our radio telescope arrays (HERA,LOFAR,SKA) require to make a detection of the 21cm signal from reionization, it appears that we should be able to quickly rule out AGN dominated reionization. This is of course due to that extra bit of signal at large scales which should be detectable first. It’s also a very real possibility (and probable) that reionization was driven by a mix of galaxy and AGN. This would obviously complicate things and might keep us in suspense until we can actually image this process.