Active supermassive black holes, also known as quasars, are “active” because they continuously feed on materials that spiral into them, forming accretion disks. These accretion disks light up the surrounding of the black holes and make them visible (see the featured image for a very realistic rendering of an accretion disk from the movie Interstellar). Intuitively then, how luminous and massive a quasar grows to be must somehow depend on the size and structure of its disk. The properties of the quasar are then believed to affect the evolution of its host galaxy, as suggested by various black hole and host galaxy relations such as the MBH-σ and MBH-Mbulge relations.

But alas, most quasars are simply too far away and their accretion disks far too small for our current telescopes to resolve  (i.e. take sharp images of). The handful of size measurements of quasar disks we currently have come mostly from gravitational microlensing, which requires years of monitoring and significant amount of (good) modeling. An alternative and more direct approach to probe the quasar disks is by extracting information from the quasar variability in luminosity.

Quasars are known to vary in an irregular and non-periodic manner (i.e. stochastically or randomly), where their variability is believed to be driven by the innermost region of the disk close to the black hole. As the inner disk experiences instability and varies in luminosity, the variability would need some time to propagate to the outer disk, causing the variability in the outer regions to lag behind that of the inner regions. The time delay is set by the size of the disk and the speed of light. Therefore, by measuring the time delay of the variability between the outer and inner disk, we can constrain the size of the disk. This is the core idea behind the technique of reverberation mapping, commonly applied to map out the sizes of the quasars broad line regions (BLR; see this very helpful schematic), which are then used to measure black hole masses.

Compared to reverberation mapping of the BLR, where the lags are measured between the continuum light curve (emitted by the accretion disk) and the broad emission lines light curve (emitted by gases in the BLR), reverberation mapping of accretion disk measures the lags between the continuum light curves at different wavelengths of light. Since continuum emission originates from the disk, this directly probes the structure the disk itself. As temperature varies between different disk annuli, different wavelengths of light are emitted; UV light is emitted closer to the inner disk while optical light further out. 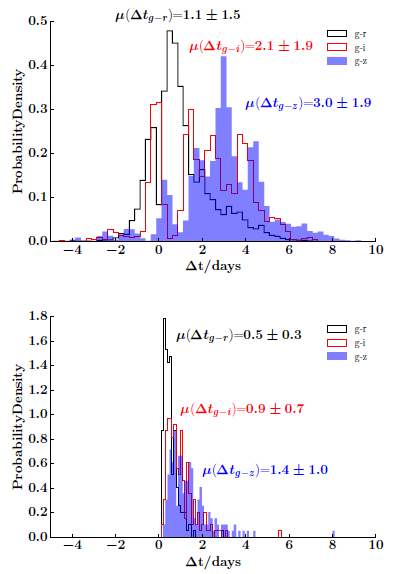 Fig. 1 – Variability lags (in unit of days) between the r-, i-, and z-bands and the g-band of the two hundred or so quasars in this study. Top panel shows the observational results, compared with theoretical predictions on the bottom panel. Notice the broader (as well as negative) lag distributions in the top figure compared with the bottom figure. [Figure 10 in the paper]

In this paper, the authors measured the optical lags of more than two hundred quasars using four years of data from the Pan-STARRS survey. This is a significant jump in numbers as, due to the intensive monitoring required, reverberation mapping of quasar disks has only been done on tens of quasars. The quasar sample in this paper consists of sources that the Sloan Digital Sky Survey (SDSS) classifies as quasars and are located at redshifts around 0.3 and 1. These redshifts are where emission lines from the BLR are least likely to be redshifted into the optical wavelengths to contaminate the continuum light curves. The authors used an algorithm based on modeling quasar variability, known as JAVELIN, to measure the lags between the continuum light curves in different photometric filters (or different bands). The top figure in Figure 1 shows the observed distributions of variability lags in the r, i, and z band from the g-band variability for the whole sample, while the bottom figure shows the predicted lag distribution from standard accretion disk theory, which posits that accretion disk is geometrically thin, optically thick, and radiatively efficient. As seen from the figure, the mean lags increase from shorter to longer wavelengths, while also having two to three times larger values compared to theoretical estimates. These larger lags imply longer light travel times and so larger accretion disks, which also agree with findings using gravitational microlensing.

While there seems to be a general increase of lags towards longer wavelengths, a number of quasars show negative g-r lags, as shown by the topmost panel in Figure 2. After ruling out factors such as observing cadence and technicalities of the JAVELIN code as contributors, the authors believe these negative lags to be real, possibly indicating some off-centered and inward-traveling disturbances that arise at the outer disk where light of longer wavelengths is emitted. To tease out the sources of these off-centered variabilities would require, as you may have guessed, more work and more data. But this statistical study of hundreds of quasars lends support to the gradually emerging picture that quasars might harbor larger cookie jars, well, accretion disks, than we initially believe. 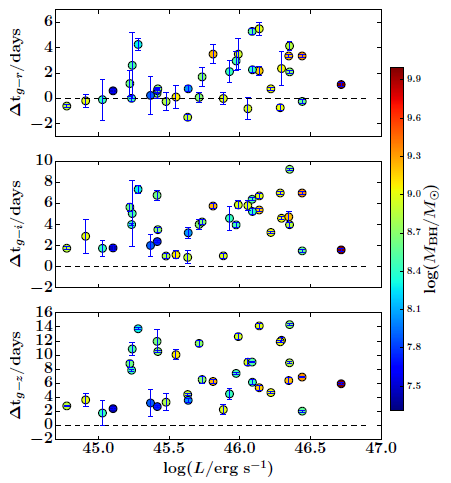 Fig. 2 – Distribution of lags as a function of the quasar apparent luminosity for a subsample of quasars with clear lag detections. The points are color-coded according to the black hole mass. Some quasars have negative g-r lags (topmost panel), where points lie below the dashed horizontal line. [Figure 12 in the paper]

How to Break Through a Wall in the Universe?

A Black Hole at the Heart of the Archer

The “Turbulent” Relationship between Stellar Feedback and Magnetic Fields