This period of ionisation of intergalactic hydrogen by the first stars and galaxies (and perhaps even the black holes at the centres of galaxies) proceeded for around 600 million years, until almost all of the hydrogen in the universe was ionised (see figure 1). It’s known as the reionisation era (see here for a more thorough introduction), and it’s hugely important to understand, since it’s during this time that the first stars and galaxies formed.

Figure 1: Timeline of the universe showing the reionisation era. Notice the bubbles of reionised hydrogen that start to appear at the end of the cosmic dark ages from the first stars and galaxies, spreading out and overlapping until the whole universe is reionised.

Reionisation requires high energy light. This light is only produced by the youngest, most massive stars. Unfortunately, these stars ‘live fast and die young’, creating lots of high energy light but only for a short period of time. They tend to ionise their surroundings really effectively, but don’t live long enough to benefit from their hard work by shining in to the cosmos.

The fraction of high energy light that escapes from around galaxies is known as the escape fraction. For most clusters of stars and galaxies this is really low. They are initially surrounded by lots of neutral hydrogen, which blocks the light. And even after their massive stars ionise this, they die, and stop creating high energy light. We see this in simulations, and in observations of galaxies in our own backyard.

This is where the puzzle starts. We’re pretty sure we know when reionisation started and ended. And we know approximately how much neutral hydrogen there was at the start. To fully ionise all of this neutral hydrogen, in this timeframe, requires a much higher escape fraction. So why don’t we see this in our simulations and observations?

Today’s paper proposes that binary stars are the answer to all of our (escape fraction-based) problems, due to their dramatic effect on this crucial parameter. 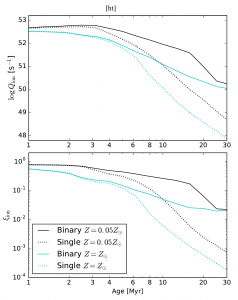 Binary stars can make all the difference thanks to interactions. Some stars in binary systems suck material off their companions, getting bigger in the process. Binary stars can also merge in to a single, much bigger star. These higher mass stars are big enough to emit the high energy light we need to ionise neutral hydrogen.

The crucial thing to understand is that these giant stars can form from binaries long after the star cluster has formed. As discussed above, the first high mass stars from the star cluster have already ionised the surrounding neutral hydrogen. The new high mass stars, formed from the binaries, are then free to release their high energy light uninhibited in to the cosmos.

The authors investigate how this could work using a new model that incorporates these binary processes. They apply it to simulations of galaxies, and find that the fraction of high energy light that escapes the galaxy (the escape fraction we discussed earlier) is boosted by a factor of ~3-6. This fits what we need to ionise the universe in time. Problem solved!

Or is it? The binary star model used is still being thoroughly explored, and it’s up for debate how well it explains other important characteristics of galaxies during this era. But it is an intriguing proposal, and one that will be investigated thoroughly by observational astronomers in the near future.