Title: The Indirect Influence of Quasars on Reionization

First, a brief history of the early universe: in the beginning, there were photons, protons, neutrons and electrons (ok, not the very beginning — about 10 seconds after the Big Bang. A lot of stuff happened before that, but let’s start from there). Matter was all in a hot plasma, and stayed that way for almost 380,000 years. Finally everything cooled down enough for electrons to combine with protons to form atoms. The universe became neutral, and the dark ages began: the only photons were those left over from recombination, which form the cosmic microwave background, and for hundreds of millions of years there were no other sources of light. Once the first stars and galaxies form, they produce ultraviolet photons with energies high enough to ionize the neutral matter that the universe is composed of. This marks the epoch of reionization.

The universe around us today is ionized, and finding exactly when and how it became reionized is one of the great challenges in modern astrophysics — many previous astrobites have discussed this problem. There is some controversy as to what those first sources of ionizing photons were. Perhaps runaway stars, AGN, globular clusters, or low mass galaxies; the dominant mechanism is still up for debate. A big problem is how to get ionizing radiation out of a galaxy. Even if massive stars are pumping out UV photons, gas and dust inside the galaxy can re-absorb them and prevent any from leaking out into the wider universe. The fraction of ionizing photons that can get out is quantified by fesc, the escape fraction.

The authors of today’s paper investigate the role of quasars in the reionization of the universe. Instead of considering the UV photons generated by quasars themselves (quasars have been ruled out as a significant source of reionizing photons by several other authors), they look at the indirect effect that they may have. Winds and outflows produced by these supermassive-black-hole-powered engines may blow out intervening gas clouds, allowing more stellar ionizing photons to be released into the universe.

The authors simulate a universe to investigate the effect of quasars at very early times, using an N-body simulation with a semi-analytical model of galaxy evolution. They tweak their model to allow quasar-driven winds that are prompted by galaxy mergers. They then compare two different scenarios: one with a low baseline fesc which is boosted every time there is a quasar wind, and the other in which fesc is fixed at a higher value. 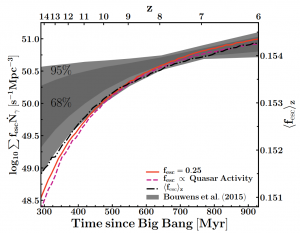 Figure 1 shows how the escape fraction changes over time, with the grey shaded regions showing estimates of fesc from observations of high redshift galaxies. Both scenarios fit reasonably well with observations — despite having a much lower baseline fesc, the quasar wind boosts are able to release enough ionizing photons. However, both models fail at redshifts > 10, where they do not generate a high enough escape fraction. The authors attribute this to the resolution of the simulation being too low to capture galaxies in the very smallest dark matter halos, which may contribute significantly to the ionizing radiation, or alternatively that the baseline fesc should be higher at earlier times. 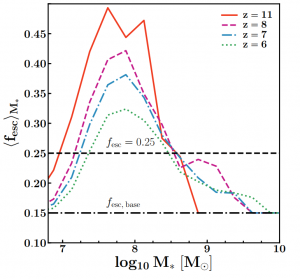 Figure 2: The average fesc for a given stellar mass in the quasar-boosted scenario, at different redshifts. Figure 3 in the paper.

The authors also investigate how fesc changes with galaxy mass in the quasar-boosted scenario. Figure 2 shows the average fesc for a given stellar mass at different redshifts in the simulation. At all redshifts, there is a peak at stellar masses of around 107.5 — 108 solar masses, since the quasar-boosting effect is most significant in these intermediate mass objects. Lower mass galaxies may not host AGN, and larger galaxies have too much gas for the quasar wind to blow enough of it away. If indeed quasars have a boosting effect on the escape fraction, the increased impact of intermediate mass galaxies should be observable in the 21 cm power spectrum, making this an interesting prediction for future observational work.

This paper explores the idea that quasar activity may boost the escape fraction of ionizing photons, and shows with a very simple toy model that they could play a critical role during the epoch of reionization. Like many models of reionization, this can only be tested when our capabilities of measuring reionization improve. Next generation radio telescopes such as HERA, PAPER, and the Square Kilometre Array aim to measure the 21 cm power spectrum in detail, which, in combination with models like this, will improve our understanding of the physical processes responsible for reionizing the universe.