Of the multitude of galaxies in the universe, none are so close to us and so numerous as the dwarf galaxies. With 59 little galaxies whirling around the Milky Way, one might think that astronomers would understand them perfectly by now; they are, after all, relatively accessible. However, mysteries abound surrounding their origins and evolutionary history, and they have introduced all kinds of problems into our understanding of astronomy. There doesn’t appear to be enough of them, occasionally they appear to be missing their dark matter and, most pertinent to today’s paper (although perhaps less exciting-sounding), some of them have peculiarly old stellar populations. A few of these galaxies contain stars that, the youngest of which appear to have formed when the universe was less than one billion years old, a mere 7% of its current age. What could cause these particular dwarf galaxies to host only incredibly ancient stars?

One explanation that has been put forward is that an event from early in the universe’s history, called reionization, could have played a hand in this. During this time period, the amount of radiation coming from stars and galaxies ramped up and ionized almost all of the hydrogen in the universe, deconstructing hydrogen atoms into their component nuclei and electrons (this is where the name “reionization” comes from). But even as this radiation was splitting apart hydrogen atoms, it was simultaneously heating up all of the gaseous elements, including the hydrogen, as well as helium and the other less abundant elements. It is theorized that this heating effect on the gas may have somehow either (1) prevented dwarf galaxies from collecting new gas or (2) caused them to lose what gas they already had, as it photoevaporated away. It is also believed to be more significant for smaller galaxies.

The investigators behind today’s paper have used cosmological simulations—which model dark matter and baryonic matter (i.e. the kind that both stars and your coffee cup are made of) from very early times to form galaxies, the cosmic web, and any other large-scale object in the universe that you can think of—to examine how including a simulated reionization event may have affected dwarf galaxies’ ability to accrete and retain the gas necessary for forming stars. These simulations in particular, called SPHINX, incorporate radiative transfer, allowing the researchers to create a more realistic representation of reionization than a simulation that excludes these calculations.

To understand how dwarf galaxies were affected by reionization, it is crucial to establish the effect that reionization had on the cosmic web. This colossal structure, noted for its resemblance to the network of neurons inside the human brain, is made up of filaments, long narrow tendrils of gas gravitationally confined by a scaffold of dark matter, as well as nodes, where filaments intersect and many galaxy clusters lie. Galaxies in the distant past are believed to have fed on gas from the filaments, as infalling gas was shocked while encountering the dense gas associated with the galaxy. The buildup in gas density that occurs at a shock boundary causes increased cooling rates, allowing the gas to then fall in to the central galaxy, building up the latter’s reservoir of star-forming material. If some fundamental characteristic of either the filaments or the galaxies was changed when reionization occurred, perhaps this process could have been halted. 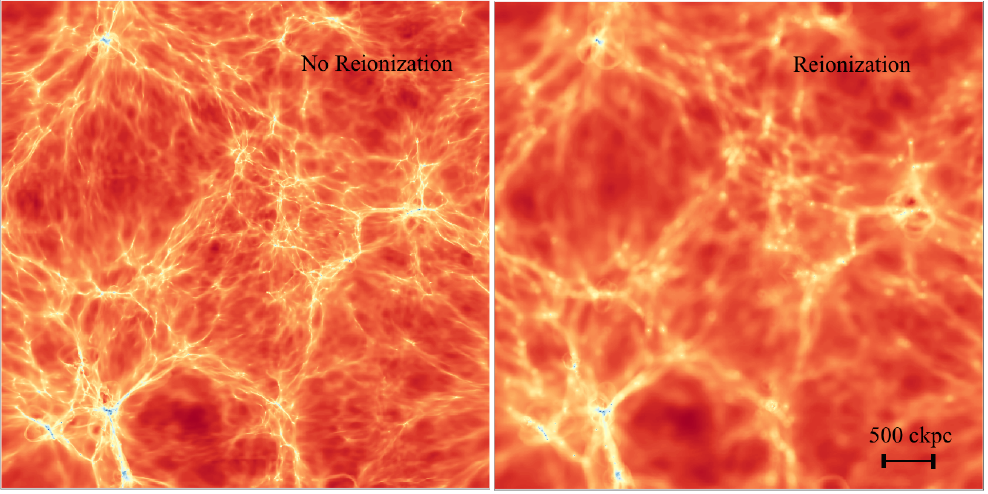 Figure 1: Direct comparison between the cosmic web when simulations exclude (left) and include (right) reionization. Note how the reionization causes filaments to become “smoothed out”. Excerpt from Figure 2 in the paper.

From a map of gas density, it is apparent that including reionization in the simulations causes filament densities to become smoothed out (Figure 1). The physical explanation for this is simple: reionization heats the gas up, which increases the pressure in comparison to the control simulation, which in turn lowers the density. This isn’t the only side effect, however, as simultaneously the gas density farther from the center of the filament grows, increasing the physical size of the filament. This is probably due to gas still being gravitationally attracted to the gaseous filament and its dark matter core, but this attraction being unable to overcome the higher gas pressure and staying trapped at a larger distance. Further, the total gas content of some filaments is reduced significantly, up to more than 80% in some cases.

What are the consequences for gas accretion onto dwarf galaxies? A larger and less dense filament is not as helpful for accretion onto a galaxy as a compact and dense one; both the increase in size of the filaments and their reduction in density result in shocks happening at a greater distance from the  galaxy, meaning that it is less likely to obtain any of the gas. The more similar the diameter of the galaxy to that of the filament, the less gas it is likely to accumulate from the event.

Figure 2: The gas density of a filament as it varies with distance from the filament center. The z values, where z is an abbreviation for the redshift, indicate the age of the universe, with higher values indicating a younger universe. Note the decreased density for lower radii and the increased density at higher radii in the simulations with reionization. Excerpt from Figure 4 in the paper.

How low can the inflow rates go?

The authors examine the trends in simulated galaxies as well, looking at how their gas inflow and outflow rates, and gas masses change in response to reionization in the simulations. Since the theory is that smaller galaxies will have trouble forming stars after reionization, the galaxies are separated into bins based on their mass, ranging from less than 30 million solar masses to greater than 100 million solar masses. Despite the wide range, all of these masses are technically considered dwarf galaxies. Another important note: “outflow” here does not mean a traditional galaxy outflow, as might be driven by supernovae or stellar feedback. The simulated galaxies were selected specifically to have no stars, so gas outflows here are due solely to other processes, such as photoevaporation.

Separating the galaxies in this way, the authors find that the inflow rates for almost all dwarf galaxies decrease after reionization, but that they decrease more rapidly for lower mass systems (Figure 3). Further, dwarf galaxies whose environment becomes reionized later in time have more rapid decreases in inflows, probably due to the more intense radiation at later times. This is not good news for galaxies that want to form stars, and the news is only getting worse! They also find that outflow rates typically increase after reionization, meaning that dwarf galaxies are simultaneously taking less gas in and expelling more gas, and again the increase in outflow rate is worse for the lowest mass galaxies. 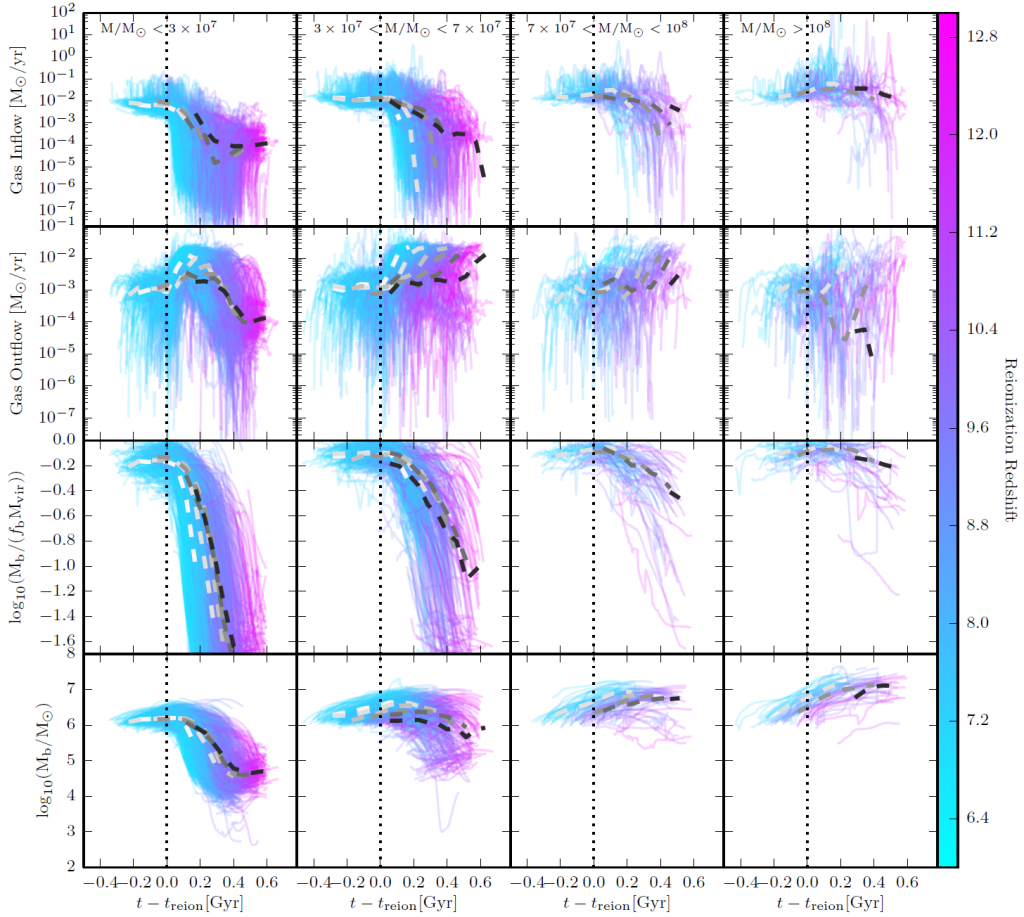 From this investigation, although it is only one of many on this subject, it is apparent that dwarf galaxies should, in theory, be significantly affected by reionization, perhaps to the extent that the lowest mass dwarfs would lose the material necessary to form stars. For the ones that are less than 30 million solar masses, photoevaporation seems to be the most important driver of gas loss, while for larger galaxies the reduction in post-reionization inflow rate seems much more significant. However, reionization doesn’t appear to deplete all of their gas, so it remains unclear if this is the sole explanation for the old stellar populations in dwarf galaxies.