The Imprint of Cosmic Reionization on Dwarf Galaxies

Title: The Imprint of Cosmic Reionisation on the Luminosity Function of Galaxies

More than 13 billion years ago, the Universe was dark and starless – an era referred to as the cosmic “dark ages.” Then, the first galaxies began to form. As clouds of gas cooled and condensed in their centers, the stars that were born illuminated the cosmos. These stars unleashed energetic ultraviolet (UV) photons, which bombarded the surrounding neutral hydrogen gas, separating it into charged protons and electrons, in a process called reionization (Figure 1).

Figure 1. A timeline showing the  evolution of the Universe. As the first stars and galaxies began to form, they illuminated the dark ages and reionized the Universe. (Credit: NAOJ)

This reionization was a milestone in the evolution of our Universe, but there is still much about it that we do not understand. We know it took place when the Universe was about a billion years old, but we don’t know exactly when and we don’t know the precise effect it had on the earliest galaxies. Actually observing so far back in time is exceedingly difficult (although progress is being made!), but luckily we don’t have to look that far to learn something about this period. Dwarf galaxies in our own neighborhood contain essential clues about this mysterious era.

These tiniest galaxies are suspected of being the driving force of reionization. They may be small, but they greatly outnumbered larger galaxies, and their first stars dominated the reionization of our Universe. They were also the most sensitive to the effects of reionization. The UV photons that reionized the cold hydrogen also heated it up, preventing it from condensing to continue forming stars in all but the largest galaxies. This means that the growth of the stellar population of the smallest galaxies would have been stunted, preventing them from increasing in brightness after reionization. By studying dwarf galaxies in the nearby Universe, we can learn about reionization in the distant past. In particular, the nature of the dwarf galaxies we observe today depends on two things – the time when reionization occurred, and the mass cutoff below which star formation was shut off.

These are the questions that the authors of today’s paper seek to answer. In particular they look at the effect of reionization on the “luminosity function” of dwarf galaxies. The luminosity function refers to the number of galaxies as a function of brightness. Within the luminosity function, reionization produces two populations of galaxies – those that are large enough to trap hot gas and to continue forming stars, thereby increasing in brightness, and those that are too small. These two populations would appear as two peaks (as in Figure 2 below). The first, fainter peak contains the galaxies that formed stars leading up to reionization and then suddenly stopped. The second, brighter peak contains the galaxies that have continued forming stars.

These peaks in the luminosity function contain the answers to the two questions posed above: when did reionization occur, and which galaxies were able to continue forming stars? The time of reionization determines the number of faint galaxies. If reionization happened later, more faint galaxies would have been able to form before being shut down, and the height of the first peak would be greater. The mass cutoff below which galaxies were not able to form stars after reionization determines the position of the valley between the two peaks. If the mass cutoff is larger, more galaxies will be left behind in the first population, and the valley will be brighter, and vice versa. Figure 2 illustrates the effect of changing the time of reionization and the cutoff mass on the luminosity function. 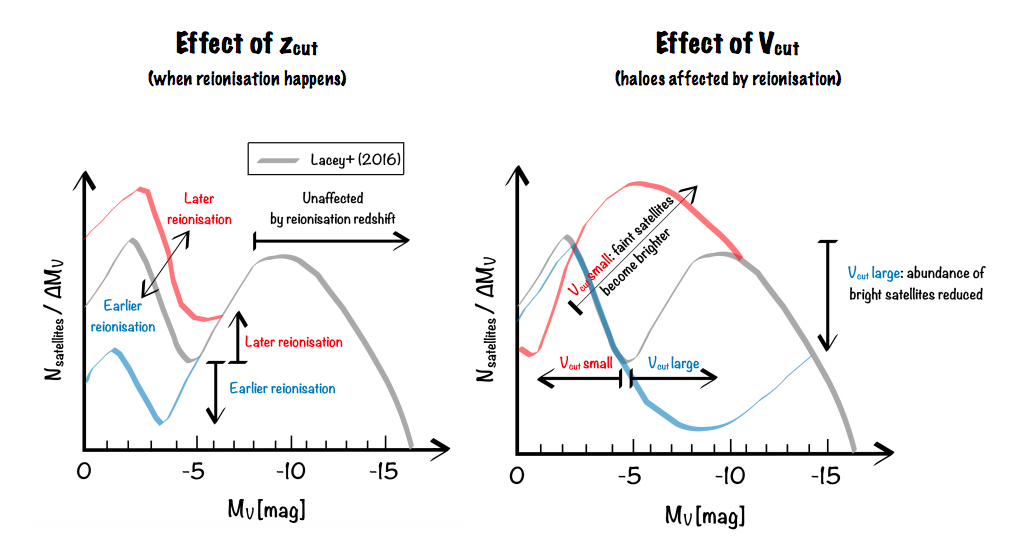 The authors of today’s paper quantified this effect on the luminosity function using numerical simulations and then compared the predictions to observations of nearby dwarf galaxies. The comparison between the simulation and the data is shown below in Figure 3. The most significant result is that the data is best matched if reionization occurred later than other predictions (redshift of z = 6, rather than z = 8.8 as suggested by the Planck collaboration). 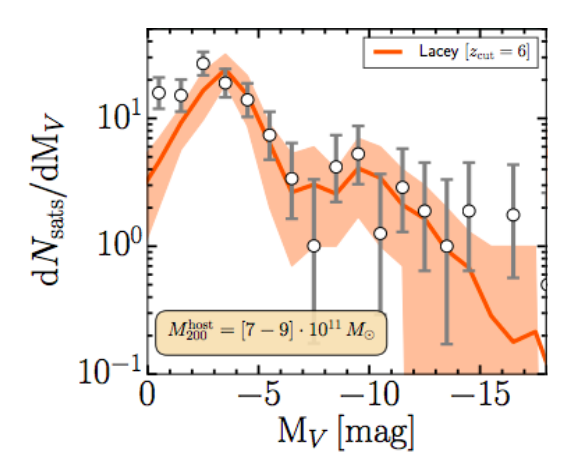 Figure 3. Comparison between the dwarf galaxies observed in the local Universe and the predicted luminosity function. The best match corresponds to relatively low redshift of reionization, z = 6. (Credit: Panel from Figure 7 in the paper.)

This will be an exciting result, if confirmed! As we continue to detect more dwarf galaxies and increase our understanding of the luminosity function, this will be a powerful method to learn about the era of reionization.

When the Neighborhood Dwarf Galaxies were Kids