When the Neighborhood Dwarf Galaxies were Kids

The heavens bespeak a dark and quiet night, glinting here and there with distant stars and yet more distant galaxies.  But in ages past, long before the birth of our stalwart Sun, before even the supernovae that spewed the calcium in our bones and the iron in our blood into the gas that formed the Sun and the Solar System, there was darkness.  The cosmic dark ages reigned for nearly a million years before the first stars blinked blearily on.

Then suddenly there came an age of light.  We’re not entirely sure what exactly lit up the universe, but among the suspects are the first galaxies.  Once practically invisible, they were lit aflame as the first stars began to burn hot and bright within them.  They generated copious amounts of ultra-violet (UV) light, energetic enough to ionize the hydrogen in the universe.  So much UV flux was generated that nearly all the hydrogen in the universe was ionized, leaving the universe clear and transparent and allowing us the majestic views of faraway galaxies that we take for granted today.

Figure 1.  The role small galaxies like the Milky Way’s newly discovered ultra-faint galaxies could have had in reionizing the universe.  The top panel shows the number density of galaxies as a function of how bright they were in the ultra-violet (MUV), what we call the Schechter function.  The colors denote how the numbers changed with time; purple (z ~ 8) denotes when reionization occurred, and the lighter colors denote the subsequent evolution after reionization.  Far more faint galaxies (less negative MUV) exist compared to brighter galaxies.  Together, they produced most of the UV flux during reionization, as shown in the middle and bottom panels:  the middle panel shows the density of UV photons (which is clearly highest at the faint end), and the bottom panel shows the cumulative fraction of the flux that galaxies brighter than a given MUV were generating.  As much as 50-80% of the UV flux that reionized the universe may have come from galaxies fainter than MUV ~ -10!  Figure taken from today’s paper.

The authors of today’s paper investigate what role the newly discovered ultra-faint dwarf galaxies orbiting our Milky Way could have had during this epoch of reionization.  For it turns out that our most careful galaxy counts—which we’ve codified into what we now call the Schechter function (see Figure 1)—tell us that the universe swarms with dwarf galaxies, which are at least a thousand times less massive than the more familiar grand spirals such as the Milky Way.  The Milky Way itself is thought to be surrounded by several hundreds, if not thousands, of such galaxies.  Dwarf galaxies are so numerous that together, they may have been able to provide much of the UV photons required.  It was an age in which the smallest galaxies ruled the ultra-violet skies.

We don’t know for sure if dwarf galaxies can solve the mystery of reionization.  The problem is that it’s extremely difficult to peer into the universe’s distant past, and literally impossible to observe the faint dwarfs that existed then.  Our best observations hint that there were many more dwarfs in the past than in the present, before they were torn apart and cannibalized by larger galaxies.

To work around these uncertainties, the authors did something simple.  They worked out when the stars in the Milky Way’s ultra-faint dwarfs formed to determine how much UV light they’d give off during reionization.  They then asked:  If the Schechter function was valid for dwarfs as dim as the Milky Way’s faintest dwarfs used to be, how much UV light would they have produced?  They found that dwarfs could have generated as much as 50-80% of the UV photons needed to reionize the universe.

There’s hints, however, that such a simple extrapolation of the Schechter function to ultra-faint galaxies overestimates the number of bright UV-emitting dwarfs.  The Schechter function predicts that we should see as many as ten times the number of bright dwarfs around the Milky Way than we actually do.  And it’s becoming clear that the smallest galaxies have trouble producing UV-generating stars.  This would cause the Schechter function to “turn over” (see Figure 2) or predict fewer bright dwarfs (and hordes of small, dark galaxies).  The authors show that the estimated reduction in bright dwarfs seen in simulations lowers the UV flux we should expect from small galaxies to about 10%.

Although we haven’t yet gotten to the bottom of how large a role dwarf galaxies played in the ionization of the universe, it’s clear that the yet unobservable number of UV-bright dwarfs matters greatly in understanding how the history of the universe unfolded.  The upcoming James Webb Space Telescope has the ability to detect galaxies from the epoch of reionization that are almost 100x fainter—still far short of the 10,000x increase in sensitivity we need to see the faint UV galaxies that preoccupied today’s authors.  It’ll be a big step forward, but we’ll still have to hunt for other clues as to the true numbers of dwarf galaxies during reionization. 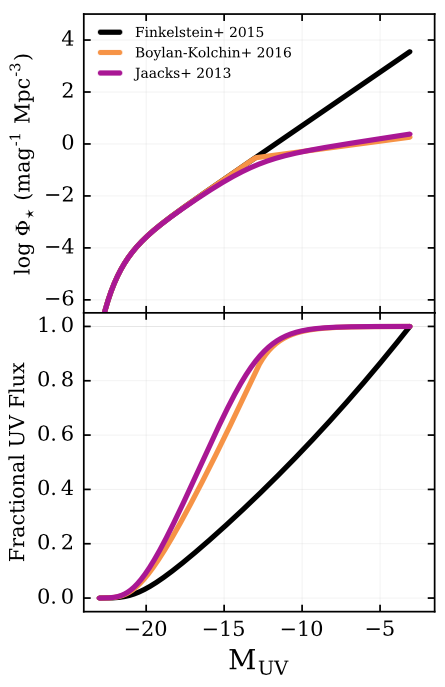 Figure 2.  How a reduction in the number of ultra-faint dwarf galaxies can reduce their contribution to the reionization of the universe.  The top panel shows different guesses as to the number density of galaxies of a given UV brightness.  In black is the traditional Salpeter function, which predicts many faint UV galaxies, while the orange and purple curves are based on simulations that show a “turn-over” or reduction in the number of faint UV galaxies.  The bottom panel shows that if there are just a few UV-faint galaxies, then they contribute only ~10% of the UV flux that reionized the universe.  Figure taken from today’s paper.

Where are all the (intelligent) aliens?