Where are all the (intelligent) aliens?

We all harbor some deep hope that one of these days ET, a UFO, or some space probe from a distant star system will make its way to Earth.  There will be major headlines, and the world leaders will convene to discuss the implications, etc: “Evidence for intelligent life outside Earth at last!” they will say.

While the enormity of the galaxy makes the prospect of finding another intelligent civilization daunting, some theorists, including the author of this paper, argue that it’s surprising we haven’t found one yet.  Or, to be more specific, it’s surprising that they haven’t found us.  This is an articulation of Fermi’s Paradox (also described in this recent astrobite by Nick Hand), which says that the theory that intelligent life should be rampant throughout the galaxy is at odds with the complete lack of observations of such civilizations.  Wiley reviews and tweaks several theories (self-replicating probes, percolation theory, and interstellar societal collapse, all described below) that describe how quickly an intelligent civilization could sweep across the galaxy.  He ultimately comes to the conclusion that, if our galaxy does harbor extra-terrestrial intelligence (ETI), our solar system is the first place we should look.

The reason Wiley thinks our own solar system is the most promising star system to search for ETI is because he predicts there should be between 100 and 100 billion  Self-Replicating Probes (SRPs) in our solar system.  A self-replicating probe is a probe that has two purposes: to explore and to reproduce.  As such, it travels to another star system, uses the resources there to make one or more perfect replicas of itself, and then one probe stays to explore while the others fly away to spawn new probes.  Wiley and other authors argue that self-replicating probes aren’t too hard to build (we should have the technology in a mere 200 years or so), and because the probes reproduce exponentially, they are probably the cheapest, fastest way to explore the galaxy.

The main criticisms against SRPs are concerns that SRPs would “mutate,” or reproduce imperfect copies of themselves that could become (1) cancerous, or (2) predatory.  Thus, an ETI would choose not to build SRPs out of self-preservation.  This would explain why we haven’t found any SRPs yet.  Wiley counters that the biological analogy of reproduction does not readily encompass mutations.  For instance, when is the last time you copied a file on your computer (say, a word document) and noticed a mutation (for instance, the word “cat” was replaced with “car”)?  Computers can copy billions of bits without slipping up.  So Wiley thinks SRPs are a pretty safe way to explore the galaxy, and so an ETI capable of making SRPs would logically do so.  Thus, there should be at least hundreds of SRPs in our own solar system, according to Wiley.

Wiley then discusses Percolation Theory.  The basic idea is that, in an alien civilization that is colonizing other star systems, some colonies will be interested in colonizing other star systems (“active” colonies) and some colonies will not colonize (“inactive” colonies).  Each colony has a probability P of being active, and colonies can only colonize adjacent star systems.  For values of P below a critical value, so many colonies are inactive that they create bubbles that entrap the active colonies, thereby halting expansion.  This rendition of percolation theory allows for the possibility that ETI exists in our galaxy, but never colonized far and wide enough to leave traces near our solar system, as shown in figure 1. 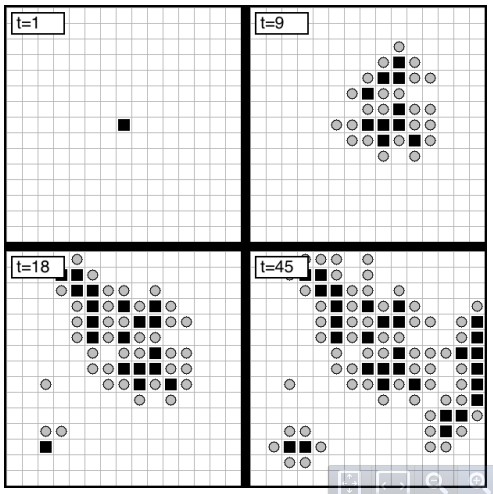 Wiley explores the addition of two simple new rules to the theory: (1) colonies can die with probability K, thereby opening channels through which trapped active colonies can colonize, and (2) colonies can mutate from “active” to “inactive” colonization status with some probability M.  These additions facilitate colonization, allowing ETI to spread throughout the galaxy for much lower values of P.  Thus, we would be more likely to see some evidence of ETI close to home, as shown in figure 2. 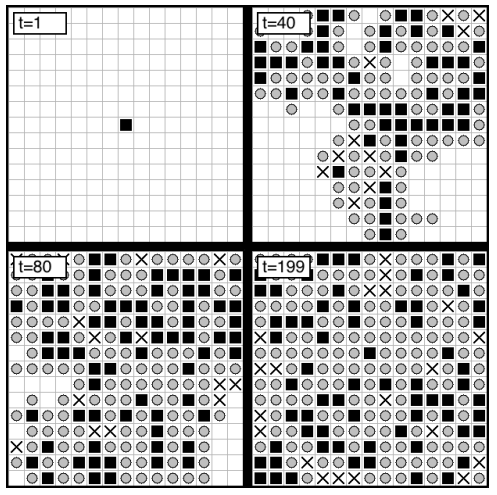 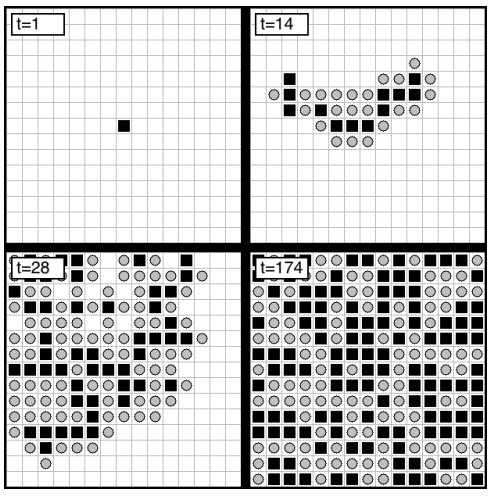 Figure 2. Same as figure 1, but with additional rules. Civilizations with colony death (left, marked by *x*) and colony mutation (right) expand to fill the entire box (or galaxy).

Finally, Wiley deals with the theory of interstellar societal collapse, or the possibility that suddenly, an intelligent civilization goes out like a light.  (Our own brush with nuclear warfare inspired the idea of mass civilization extinction).  However, Wiley points out that this picture of a whole interstellar civilization winking out instantaneously is unrealistic.  To quantify how societal collapse would propagate through an intelligent civilization, Wiley introduces Interstellar Transportation Bandwidth (ITB).  ITB is “the number of people capable of moving from one solar system to another per unit time” (Wiley).  Why would the flow of people limit the rate of societal collapse?  Wiley thinks that interstellar communication is insufficient to trigger societal collapse; rather, collapse is resource-oriented.  Thus, the transfer of resource-consuming people (rather than information) becomes the harbinger of societal doom.  Because transferring people is much slower than transferring information, ITB theory inhibits societal collapse, adding to Wiley’s argument that expansionist civilizations should be here by now.

But what if the expansionist civilizations are the ones that use up their resources too quickly and die out?  (Some people worry this will happen on Earth, where exponential population growth depletes the resources available to each individual.)  Wiley acknowledges this possibility.  However, he brings up the counter-example that non-expansionist civilizations (such as the Kung San of the Kalahari Desert) on Earth are the ones that don’t thrive, whereas as the expansionist societies (such as “Western civilization”) do.  Also, his own ITB theory favors civilizations that have already colonized many worlds: the more worlds there are, the more that are likely to survive.

All of Wiley’s arguments point to one observation: if ETI exists in our galaxy, we expect to find evidence in our solar system.  But harkening back to Nick’s astrobite, we should note that our own solar system is vastly unexplored.  Wiley closes his article by encouraging the Search for Extra Terrestrial Intelligence (SETI) to refocus its efforts; rather than looking for civilization around other stars directly, it might be more fruitful to develop new programs that search for such objects as SRPs in our own galaxy.  They could be here already.

Shouldn’t we be orbiting a red dwarf?