After the Big Bang, the whole universe was a dense cosmic soup of fundamental particles.  The universe cooled (relatively) quickly, and after ~400,000 years, or a redshift of z ~ 1100, protons and electrons combined to form neutral hydrogen.  Thus began what is known as the cosmic dark ages, in which the universe was unobservable because any radiation emitted would have been almost immediately absorbed by the surrounding neutral medium.  The dark ages continued until 1 billion years after the Big Bang (z ~ 6), when the first stars and galaxies began to radiate photons energetic enough to reionize the neutral hydrogen (see other astrobites here, here, and here for more information on reionization).  Herein lies the mystery: All the “dark age” galaxies that have been observed cannot produce the energy that would have been required to reionize the universe.

Where might this ionizing radiation have come from? It has long been postulated that highly star-forming, low-mass galaxies could be responsible for the missing ionizing radiation. These galaxies are extremely difficult to detect directly in the early universe because they are hidden behind a veil of photon-absorbing neutral hydrogen, requiring ultraviolet or higher-energy photons to observe them. so another option is to find local analogues for these types of galaxies.  To date, only three galaxies have been found to leak any ionizing radiation, since local, highly star-forming (or star-bursting) galaxies tend to not allow this radiation to escape in any significant amount since the neutral hydrogen in most such galaxies absorbs it all. Finding local, star-forming, low-mass galaxies leaking ionizing radiation, as proxies for the galaxies that may have helped ionize the universe after the cosmic dark ages, could finally help solve the reionization mystery.

The authors of today’s paper present far ultraviolet observations from the Hubble Space Telescope (HST) of a galaxy known as J0925+1403.  This galaxy is what is known as a “Green Pea” (GP) galaxy, which are compact, oxygen-rich, highly star-forming galaxies known for their green appearances in images from the Sloan Digital Sky Survey (SDSS).  J0925+1403 was chosen for several reasons. Its compactness makes it very similar the “dark age” galaxies that helped ionize the universe. This galaxy also has emission lines that indicate star formation as well as the presence stars hot enough to generate the ionizing radiation, known as the Lyman continuum (LyC). Finally, it is very bright and has a redshift that allows the Lyman continuum to be measured with the Cosmic Origins Spectrograph (COS) on HST (z = 0.301).

The team measured the two separate portions of the galaxy’s spectrum – the section that contained the redshifted LyC with a wavelength of less than 912 Angstroms (where an Angstrom, or Å, is 0.1 nanometers, or 10-10 meters), and the section that measured the Lyman-alpha (Lyα) emission line at 1216 Å. The Lyα emission line is actually a doublet, meaning that it splits into two peaks separated by just 0.006 Å.  This separation between the peaks widens with increasing neutral hydrogen in the galaxy.  In J0925+1403, this peak is quite narrow, as seen in Figure 1, indicating that the neutral hydrogen content of the galaxy is low.  This means that the LyC can more easily escape the galaxy than other GPs studied.  This is an indication that J0925+1403 might just be an analogue for the missing source of ionizing radiation in the early universe! 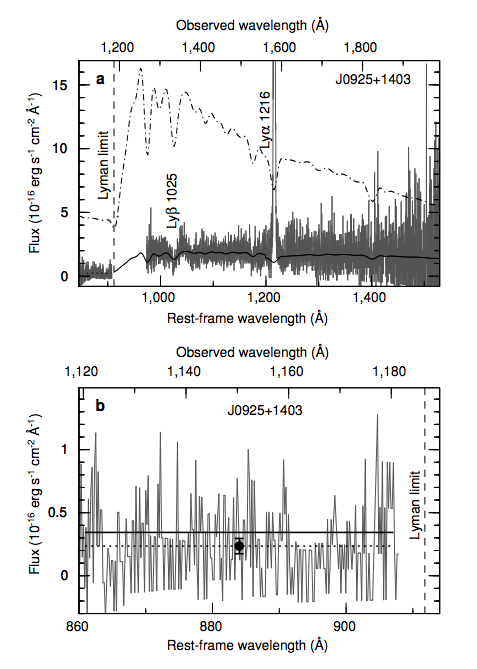 The spectrum for J0925+1403 is shown in the figure. The interesting takeaway from these plots is that the LyC measurement is not zero!  This means that we are seeing ionizing radiation escaping from this galaxy, and given that the error bars are quite small, it is a very significant detection. The authors calculate the percent of LyC photons that escape the galaxy, or escape fraction, to be ~ 8%.  This is several times higher than the other three galaxies with detected ionizing radiation leakage. A single galaxy of this type could ionize 40 times its own stellar mass. Now that we understand better how to find low-redshift proxies of these galaxies, we may be one step closer to solving the mystery how the universe become reionized 1 billion years after the Big Bang.