Title: The physics of Lyman-alpha escape from high-redshift galaxies

Astronomers run into a predicament when attempting to study galaxies as they existed when the Universe was only about 1 billion years old (or even younger!), namely that these galaxies are quite far away and appear exceedingly dim in detector images, even when using large telescopes. How is one to learn what typical galaxies were like and how they were evolving if they are so difficult to see? Luckily, there is a special sort of light that is so bright it can even be seen from enormous distances. Called Lyman α (pronounced as “lyman alpha”), this form of light provides a possible way of studying some of the earliest galaxies to understand their evolution and structure. Today’s study takes a look at how Lyman α radiation is created within galaxies and how it escapes their boundaries to traverse the rest of space.

Lyman α (often abbreviated as Lyα) emission is created when the electron in a neutral hydrogen atom drops from the second energy level to the first, decreasing the energy state of the atom. In doing so, a photon is released by the atom at a wavelength of 1215 Angstroms. The electron can be raised into the second orbital by two broad processes occurring in galaxies: gas heating by stars or shocks, or through collision excitation as gas is struck by shockwaves initiated by supernova or star formation episodes. If a hydrogen atom emitting Lyα were all by itself out in space, the photon would travel undisturbed in whatever direction it was moving until it encounters another object to reflect off or be absorbed by (ideally the waiting detector of an astronomer’s telescope). However, in the early Universe, atoms are not alone and Lyα undergoes a process called resonant scattering. Due to this effect, it quickly becomes very difficult to anticipate how Lyα emission traverses the gas as it exits a galaxy.

One example of the complexity of Lyα emission is that it often shows spectroscopic line profiles that are double-peaked. A peak is called red if its wavelengths are mostly shifted to longer values than the rest Lyα wavelength and called blue if shifted to shorter wavelengths. Further, it has been established through theoretical work that the red peak will tend to be larger (red-dominated) if there is an outflow of gas out of the galaxy present, whereas the line profile will be blue-dominated if there is an inflow (see this Astrobite for an observed galaxy with a blue-dominated Lyα signal).

All told, the complex physics and galactic processes that must be incorporated into Lyα emission mean that it is tremendously challenging to model. However, if done well, it can provide a window into the processes occurring in these early galaxies. 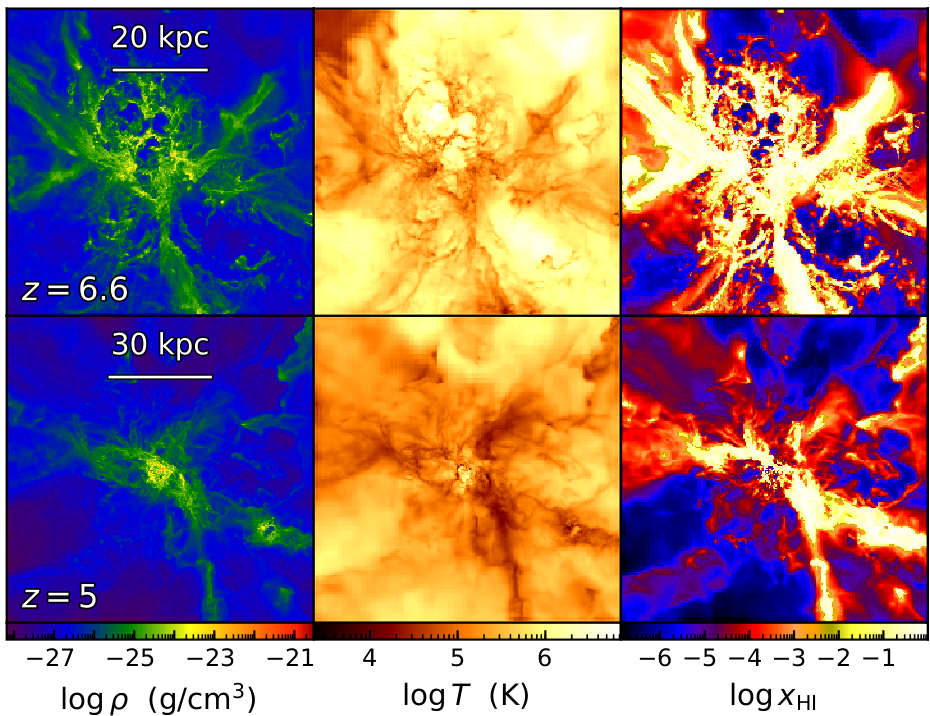 Figure 1: Projections of the simulated galaxy in this study. From left to right they show the density, temperature, and neutral hydrogen fraction of the gas within the galaxy. The top row shows the galaxy as it would have existed when the Universe was about 0.8 billion years old and the lower panel corresponds to about 1.2 billion years. Modified from Figure 1 in the paper.

The authors use a “zoom-in” simulation, which involves rerunning a small piece of a large cosmological simulation at high resolution to focus on the evolution of a smaller structure. In this case, they zoom-in on one galaxy (Figure 1) and simulate the hydrodynamic processes and radiative transfer within the galaxy to study how Lyα production ebbs and flows and how it eventually escapes from the galaxy. It isn’t as simple as modeling how Lyα photons are being created by recombination (i.e. cooling gas) and collisions either; the authors further have to model how Lyα photons move through the interstellar medium (ISM), the gas surrounding stars within a galaxy, and out into the intergalactic medium (IGM), the gas lying between galaxies and mostly occupied by the filaments of the cosmic web. The ISM and IGM both partially absorb the Lyα photons, letting only a fraction of the total light escape the structure, and contribute scattering effects. Using these results, the authors examine the characteristics of the Lyα signal released by the galaxy, calculating the Lyα emission that would be viewed from many different angles, all to address the goal of understanding what the traits of a Lyα signal can tell us about early galaxies.

Taking account of their simulated galaxy’s properties with time, the authors see how the intrinsic brightness and escape fraction (i.e., the fraction of Lyα photons that can actually escape out through the IGM) evolve in time (Figure 2). The authors see that the Lyα brightness gradually decreases with time, but then spikes almost immediately when the galaxy undergoes a burst of star formation (check out these Astrobites articles for more reading on starburst galaxies). Interestingly enough, the escape fraction of Lyα doesn’t increase immediately. Only after 55 million years have passed does it show a spike. Evidently, the Lyα escape fraction will be affected by star formation, but there will be a time lag. Further, regions with red-dominated Lyα profiles tend to have large line widths (called equivalent widths). In other words, the exceptionally large line widths seen when viewing certain regions of the galaxy appear to be created by outflows in the simulation at these locations. Conversely, regions with low line widths show blue-dominated Lyα profiles and may indicate the presence of an external gas filament, perhaps contributing an inflow.

Figure 2: The Lyα signal coming from the simulated galaxy over the course of several million years. For both panels, red shading indicates that Lyα absorption by dust in the ISM has been accounted for, while green shading indicates an accounting for absorption in the IGM. The black star indicates the time at which the starburst episode occurs. Modified from Figures 6 and 7 in the paper.

By tracking all of the Lyα photons and measuring how far each photon packet travels before being absorbed, the authors are able to find the Lyα energy density in each cell of the simulation, building up a 3D picture of how the resonant scattering occurs in the galaxy (Figure 3). They find that over time there is a buildup of Lyα density in the central region of the galaxy, and that Lyα formed by recombination in cooling gas is more likely to get absorbed, or trapped, than Lyα associated from collisions. Further, when a large amount of Lyα is trapped in this way, Lyα can transfer a significant amount of momentum to the gas leading to disruptions in star formation, supermassive black hole growth, and accretion of IGM gas onto the galaxy. The authors conclude that this effect may be particularly important for regions of the galaxy attached to cosmic filaments, although it likely can be neglected for the remainder of the galaxy. 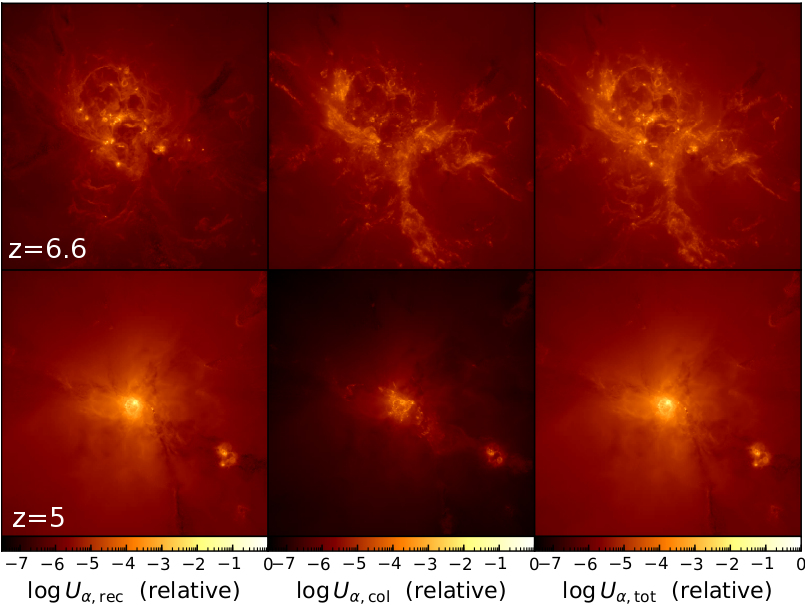 Figure 3: Snapshots of the simulated galaxy at two moments in time. Moving left to right they show the energy density of Lyα formed by recombination, collisions, and the combined total. Modified from Figure 21 in the paper.

The authors have used state of the art simulations and analysis techniques, but they leave off by noting that future studies will benefit from using higher resolution simulations and incorporating other physics such as the effects of energetic particles called cosmic rays into the models.