Title: A Window on the Earliest Star Formation: Extreme Photoionization Conditions of a High-Ionization, Low-Metallicity Lensed Galaxy at z∼2∗

A crucial component of understanding how galaxies evolve is figuring out what their earliest years are like. However, this presents a problem to astronomers since most early galaxies are believed to have been small and faint, and are quite distant to boot. One simple workaround is to study nearby galaxies that we believe have similar properties to the progenitors of older galaxies like the Milky Way or Andromeda. Today’s paper covers the analysis of one such galaxy.

Previous observations of the galaxy SL2S0217 using the Hubble Space Telescope have revealed that it is young, small, metal-poor, and forming about 23 solar masses of new stars per year. Small galaxies like SL2S0217 can sometimes be hard to observe at large distances since they tend to be faint. However, this galaxy is serendipitously located behind a much larger galaxy, which gravitationally lenses it and magnifies its light by a factor of 17, simultaneously smearing it into an arc-like shape (Figure 1). Using a model of the lens, astronomers have been able to reconstruct the true appearance of the galaxy, revealing a clumpy and irregular shape.

Figure 1:  Left: The galaxy and foreground lens in three filters from the Hubble Space Telescope, three contours specifying the regions in the galaxy whose light was analyzed. Right: The de-lensed background galaxy, showing contours which correspond to the regions in the left panel. Excerpt from Figure 1 in the paper.

In today’s paper, the authors used spectra of this galaxy obtained from the Keck I telescope, to study a spectrum showing strong UV emission lines (Figure 2), likely coming from a combination of nebular gas around hot stars and from the interstellar medium (ISM). These features are highly unusual for redshift 2 galaxies, which generally don’t show strong signatures of strong emission. 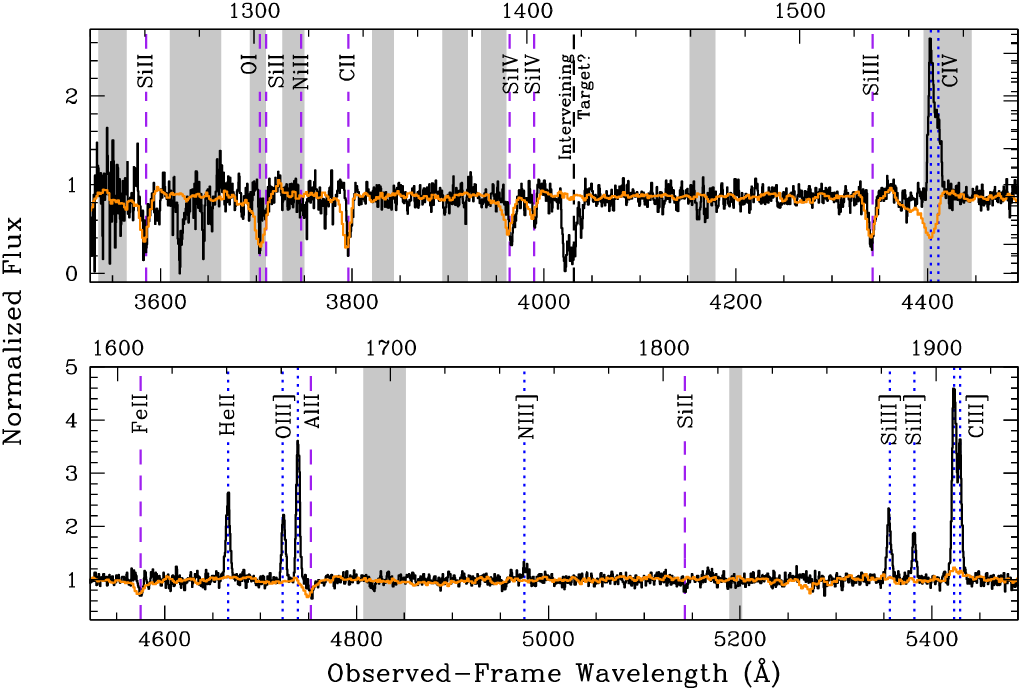 Figure 2:  The spectrum of SL2SJ0217 is shown in black, while the orange line shows the stacked spectrum of 1000 redshift 2 galaxies to serve as a comparison. The blue dotted lines and purple dashed lines show nebular and ISM features, respectively.  The gray bars show regions of the spectrum that may be contaminated in observations by spectral features of the Earth’s atmosphere.  Excerpt from Figure 4 in the paper.

In order to figure out what the conditions in the real galaxy are like, the authors use the program CLOUDY17 to model the chemistry and photoionization occurring in nebular gas and the ISM, generating a simulated spectrum.  By varying the input parameters to the model and comparing the simulated and observed spectra, the authors find the best-fit model to the observed spectrum confirming the previous finding that the nebular gas of SL2S0217 is metal-poor and embedded in a hard radiation field.  This hard radiation indicates that there is an abundance of high energy photons in the galaxy.

Building on this result, their best fit is obtained when including the effects of binary star evolution indicating that this galaxy contains a high fraction of binary stars (which is not generally assumed when modeling stellar populations).  However, one characteristic of the spectrum could not be reproduced, namely a particularly strong and narrow He II emission line (Figure 3).  Unable to reproduce this strong emission using stellar photoionization alone, additional ionization sources are considered for the gas, separately incorporating the effects of shock and active galactic nuclei (AGN) heating into the photoionization code to see if these could potentially cause the high He II.  Varying the shock velocity and the radiation field of the AGN they find that, although including strong ionization from shocks or AGN into the model increases the predicted He II emission, it does so at the expense of overpredicting the emission in the other observed lines.  Thus, this line remains unexplained.

Figure 3:  The observed spectrum of SL2SJ0217 shown in black, while the best-fit model spectrum is shown in orange.  Most emission features are well matched with the exception of the He II line, which is underpredicted.  Figure 12 in the paper. 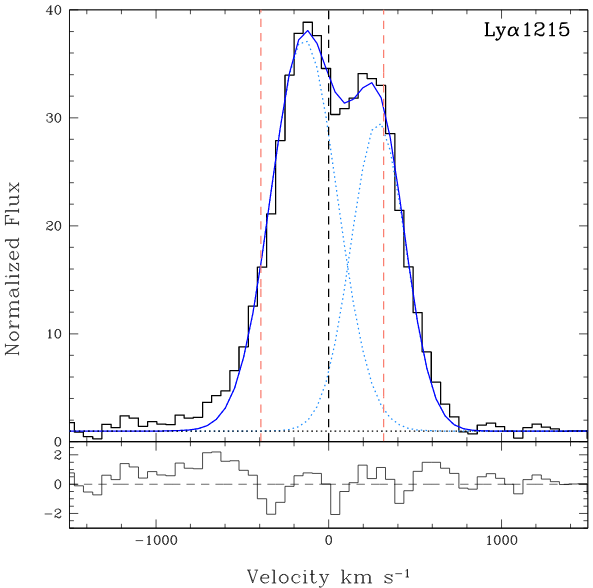 Figure 4: The double-peaked emission of SL2SJ0217 in Lyman alpha. The red dashed lines show the average velocity range of absorption features in the spectrum (not shown), the black dashed line shows the systemic velocity of the galaxy, while the solid blue line shows the blended Gaussian profiles used to fit the emission.  Figure 6 in the paper.

Overall, it is clear that this galaxy has many unique characteristics distinguishing it from others at its cosmic epoch. However, the strong He II emission is unexplained and the authors speculate that better models of massive, metal-poor stars are necessary in order to fully explain the observed nebular emission. If SL2SJ0217 is indeed representative of the very first generation of galaxies, there is still some work do be done before we can understand them completely.