What better way to start today’s astrobite than a movie? Hit ‘play’ and I will explain.

On screen is the view around a computer-simulated active galactic nucleus (AGN) in today’s paper, available at the first author’s personal webpage. An AGN is the center of a galaxy with a black hole actively feeding on gas while giving out luminous radiation across the electromagnetic spectrum. The color reflects the temperature of the gas/dust around it, red/orange parts are hot and the dark parts are cool. The video starts with a face-on view of a gas disk, followed by an inclined view showing the cold, dusty molecular gas (the clumpy dark lanes) obscuring the central source.

The traditional unified model of AGN consists of a bright central radiation source surrounded by a donut-shaped dusty torus, as shown schematically in Figure 1. Different types of AGNs could then be understood as models with various jet structures and radiation power levels viewed from different angles. However, recent mid-infrared observations found that in some AGNs dust emission comes from the polar regions, but not from the dusty tori. Since we don’t expect any dust in the polar regions, the traditional picture is therefore shown to be incomplete! 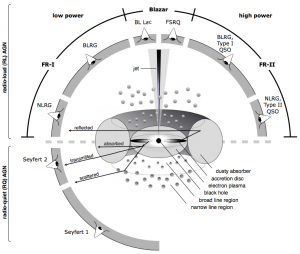 Figure 1. Schematic representation of the unified AGN model. Various types of AGN can be understood as the result of different viewing angles, whether the central black hole is producing a jet, and the power level of the central source. (Credit: Beckmann & Shrader 2012)

The dusty-torus picture proves to be very useful in explaining the nature of AGNs. However, no one really understands how these tori come to be and how exactly they determine the AGN properties. The lead author of today’s paper has come up with a model explaining the production of the torus structure, known as the “radiation-driven fountain” model. In this picture, the intense radiation from the central source drives a vertical circulation of gas, naturally creating a thick disk resembling a dusty torus. We will see at the end of this astrobite that this model could produce the polar dust emission unexplained by the traditional model.

Today’s paper applies the “radiation-driven fountain” model with improved radiation physics to produce synthetic observations of the nearest AGN – the Circinus Galaxy, and compares them with actual observations. In particular, the major improvement is the chemistry of the X-ray dominated regions near the central source, which is crucial in producing reliable synthetic observations. Model parameters are chosen to match those of the Circinus. The simulation starts with a central black hole of 2 million solar masses surrounded by an initially thin gas disk. The radiation from the central regions stirs up and drives a circulation of gas under the gravity of the black hole. Energy input from supernova explosions is also included. 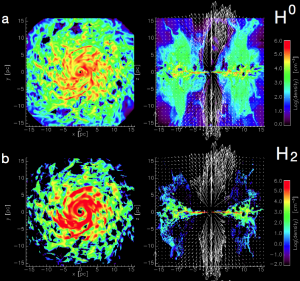 Figure 2 shows the distributions of atomic and molecular gas. On the top right panel we see the edge-on view of the disk. The thickness of the disk is comparable to its diameter, it shows that the fountain flows can indeed produce a geometrically thick disk with hollow cones above and below. This is a big deal because we now have a natural way of getting a structure resembling the traditional dusty torus! Supernova feedback is also shown to be required to maintain the thick disk structure for low-mass AGN like the Circinus. The authors also perform radiation transfer calculations to predict the spectral energy distributions (SEDs) of the Circinus Galaxy. The model-predicted SEDs at different inclination angles (black) are plotted together with the actual observations (blue) in Figure 3. Models with inclination angles greater than 70° match the actual observations quite well. From mid-infrared image of Circinus the inclination angle is inferred to be ~75°, confirming the SED analysis. 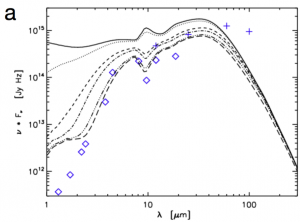 From the video we can see there is irregular bright emission along the polar axes. Such emission is originated from the hot dust circulating the polar regions – a feature of the fountain model! The model therefore also naturally explains the polar dust emission! Although the model does not provide a full explanation for everything about AGNs, this work is undoubtedly a beautiful attempt at combining advanced theoretical modeling and edge-cutting observations to learn about the nature. For this we are grateful for the authors’ hard work.